Planetary Resources has us thinking about mining the asteroids to extract useful materials, but learning more about these objects will benefit us in all kinds of ways. Not only do asteroids offer up clues about the early Solar System, but getting to understand their composition and structure will be a key element in any future plans to change an asteroid trajectory. The topic comes to mind periodically as various asteroids make close approaches, and right now I’m looking at asteroid 2012 DA14, which will close to within 22,000 kilometers this coming February.

2012 DA14 is a small asteroid, discovered in early 2012 at the Observatorio Astronómico de La Sagra in Spain, and it is not an impact threat for us next year, although prudence dictates keeping an eye on it for future orbits — the object is recently enough discovered that we’ll need to study it longer to get a better read on future encounters. I see that the University of Central Florida is organizing a viewing party in Orlando on February 15 to track the progress of the asteroid as it zips past us, with Michael A’Hearn, who led the Deep Impact mission, and Harold Reitsema (B612 Foundation) on hand to discuss asteroid research and tracking projects.

Meanwhile, an interesting story comes out of MIT involving a graduate student in the Department of Aeronautics and Astronautics there named Sung Wook Paek, author of a new paper on asteroid deflection. Paek’s notion is that pellets of paint powder launched from a spacecraft close to a problematic asteroid could be used to greatly increase its albedo. The now more reflective asteroid would be nudged off-course slowly but surely by solar photons. All of this would depend on getting to the asteroid long enough in advance to let the method work.

Paek’s work grew out of a call for papers from the United Nations’ Space Generation Advisory Council, whose technical paper competition Paek was able to win, a feat that took him to Naples to present the paper at the International Astronautical Congress in October. The competition was all about new ways of deflecting an asteroid, many of which involved launching a projectile to collide with the object, or setting off a nuclear device near enough to it to disrupt its orbit. We’ve also discussed methods like ‘gravity tractors’ in these pages, where the tiny effects of a spacecraft’s gravitational field work, over time, to draw the asteroid into a new orbit. 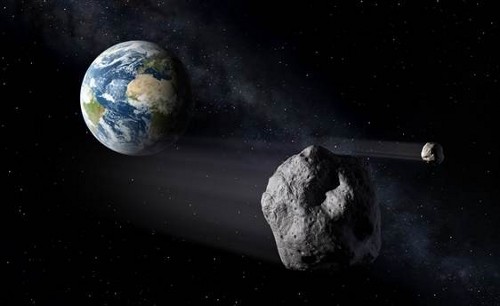 Image: The more methods for asteroid deflection we examine, the larger our toolkit in case we ever do find one on a dangerous course. Credit: GETTY.

In Paek’s method, the paint pellets would contribute their own impact to help bump the asteroid slightly off course, while the paint itself would eventually take advantage of solar photon pressure. Using the asteroid Apophis as his model, Paek calculated that five tons of paint would cover the surface (Apophis is about 450 meters in diameter) in a five-micrometer thick layer. Total time to move the asteroid out of an Earth-bound trajectory: 20 years, highlighting the need to get to such objects as soon as possible. Lindley Johnson, program manager for NASA’s Near Earth Objects Observation Program, calls Paek’s proposal an innovative variation on various methods to use solar radiation pressure. In any case, having a wide range of deflection options is only prudent in the event we ever do discover an asteroid on a truly threatening trajectory.