As we begin to identify planets in the habitable zone of their stars, the larger issue becomes what fraction of stars have such planets. This is eta-Earth (ηEarth), the percentage of Sun-like stars with Earth-like planets in the habitable zone, a figure we can gradually home in on as statistical surveys like Kepler continue to churn. Right now the estimate depends on whom you talk to, with figures ranging from 1.4-2.7% (Catanzarite & Shao, 2011) to 42% for red dwarf stars (Bonfils et al., 2011). One thing I haven’t seen discussed much is the question of when planets cease being habitable, including what we can call the phases of habitability on a given world.

Jack T. O’Malley-James (University of St Andrews, UK) and colleagues have gone to work on the question in a new paper slated for publication in the International Journal of Astrobiology. The researchers note that life emerged on Earth 3.8 billion years ago and perhaps somewhat earlier. The key point is that unicellular organisms were found on our planet at least 2.5 billion years before fossil evidence of multicellular life appears. And most animal phyla do not appear as body fossils until 530 million years ago, during the period known as the ‘Cambrian explosion.’ 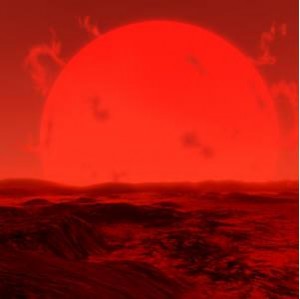 We’re living in an era that obviously supports complex life, but the continuing evolution of the Sun will take us past that state, with microbes again being the only forms of life likely to survive in the far future. We can see that extremophiles can survive today in conditions that would be extreme to impossible for humans, existing at high temperatures, highly acidic waters and other improbable places. O’Malley-James and company argue that it is statistically likely that the habitable Earth-like planets we find will be at a stage supporting unicellular rather than multicellular life.

That means we need to understand the biosignatures such worlds might exhibit, which could be unlike those produced by the majority of life on Earth today. We don’t want to miss a planet with a living microbial biosphere because its detected biosignatures differ so widely from our own. What we will eventually need are simulations of these microbial environments under different levels of radiation and surface conditions to consider what biosignatures will be detectable, using host planets that range from Earth itself to planets around red dwarfs and in binary star systems. This paper begins that process by looking at the Earth’s next three billion years.

The factors influencing habitability include solar luminosity, greenhouse gases, orbital characteristics, hydrogen escape and the runaway greenhouse effect. Looking at the Earth, the researchers find a sharp increase in surface temperatures starting about one billion years from now, keyed to the onset of rapid ocean evaporation. In high latitude regions, unicellular life might persist for up to 2.8 billion years from the present. By assuming an upper temperature boundary of 420 K (this is an extension of today’s thermophile tolerances), they also find that life could persist about 700 million years longer at the poles than at the equator, a location that could change depending on future changes in the Earth’s axial tilt or the eccentricity of its orbit.

It’s a fascinating world even if shorn of complex life, one in which pockets of living things hold out:

Rapid ocean loss as a result of a moist greenhouse effect would likely represent the end-point of a planet’s habitable lifetime. Assuming ocean loss was not uniform across the globe due to regional temperature variations, there could potentially be pockets of liquid water that remain for a brief time before total loss of liquid surface water occurs. A source of liquid water is a prerequisite for life as we know it; hence, these last pools of water would represent the final habitable regions on a dying planet.

The locations of these last habitable regions? Ocean floor trenches for one (the Marianas Trench extends about 11 kilometers below sea level). High altitude lakes are another possibility, and there is the distinct possibility that far-future life might retreat into cave systems. We’re learning more all the time about how many microbial communities exist without solar energy, and caves with their greatest volume below their entrance could act as cold reservoirs. Moreover, a far-future Earth might be one with a greater axial tilt as the Moon recedes and Earth’s rotation slows. At this point, with obliquity values of 30 to 60 degrees, equatorial regions may be more accommodating to life than the formerly cooler polar areas.

The last pools of water on Earth will likely be warm, isolated and highly saline, which means Earth’s last lifeforms will be able to tolerate high concentrations of salt and high temperatures. The researchers think such life will be found in microbial mat communities that resemble some of the life forms we’ve found around hydrothermal vents. The low abundance of ozone in this future era will subject these organisms to elevated levels of UV radiation. We can find some analogs to this in microbiological communities in some of the highest volcanoes of Chile’s Atacama desert, which live under arid conditions with large daily temperature variations.

The biosignatures of Earth will evolve until the point at which the planet is completely uninhabitable. Until that point, the by-products of an extremophile biosphere may be tricky to find:

The microorganisms from the Atacaman volcanoes appear to use the oxidation of carbon monoxide to obtain energy…While the slowing of plate tectonics may decrease the amount of available CO, hotspot volcanoes (those caused by upwellings from the deep mantle rather than at plate boundaries) could still exist. Mars (which is not tectonically active) exhibited this kind of volcanism up to as early as 2 Myr ago…, while hotspot volcanism may still be actively ongoing on Venus…The thermohalophilic organisms listed above are all anaerobic organisms which produce hydrogen, carbon dioxide, ethanol and acetate as by-products of their metabolic processes. Acetates are not promising as remotely detectable biosignatures, only managing to escape into the atmosphere (at a very slow rate) if they are formed within very acidic (pH < 4.7) water...

One possibility is that on a planet with low carbon dioxide levels compared to today’s Earth, the biological production of CO2 would produce the kind of disequilibrium that flags the presence of life. Even so, assuming a global distribution of geothermal pools equal in size to the largest ones found on Earth today, and assuming a similar number of ice caves and active hydrothermal vents as well as a basaltic crust inhabited by microbes, the authors come up with a global biological productivity that is two orders of magnitude lower than what was found on Earth before photosynthesis occurred.

Can such a reduced biosphere produce biosignatures strong enough to be detected over interstellar distances? The question is unresolved and awaits further work on biosignatures in specific extremophile environments. What’s significant about this early analysis is that it suggests the average terrestrial world around a G-class star will most likely be populated not with complex lifeforms but microbes, based on the past and future course of life on our own planet. We’re also left to ponder the need of intelligent species to use their time wisely, aware of the window for complex life and taking steps to ensure their survival once their planet becomes uninhabitable.

The paper is O’Malley-James et al., “Swansong Biospheres: Refuges for life and novel microbial biospheres on terrestrial planets near the end of their habitable lifetimes,” accepted for publication in the International Journal of Astrobiology (preprint). Thanks to Tatiana Covington for the pointer on this one.