Because I had my eyes dilated yesterday afternoon en route to learning whether I needed new reading glasses (I do), I found myself with blurry vision and, in the absence of the ability to read, plenty of time to think. Yesterday’s post examined a paper by a team led by Jack T. O’Malley-James (University of St Andrews, UK), addressing the question of how our planet will age, and specifically, how life will hang on at the single-cell level into the remote future. It’s interesting stuff because of its implications for what we may find around other stars and I pondered it all evening.

Have a look at one of the figures from the O’Malley-James paper, which shows the stages a habitable Earth-like planet (ELP) will pass through as it ages around main sequence stars. I also clip the caption directly from the paper. 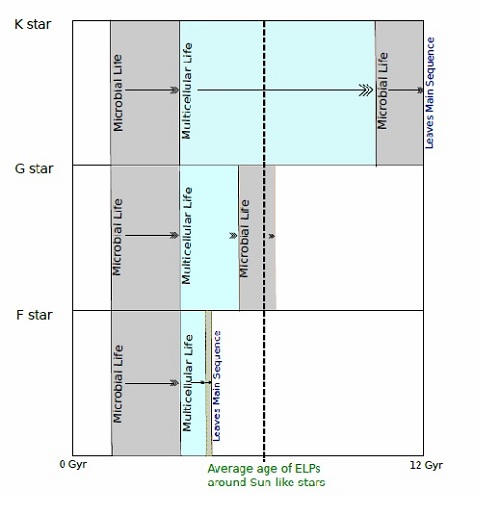 Image: Time windows for complex and microbial life on Earth analogue planets orbiting Sun-like stars (F(7), G and K(1) stars) during their main sequence lifetimes. Assuming that the processes leading to multicellular life are the same as on Earth (i.e. 1 Gyr for life to emerge and 3 Gyr for multicellularity to evolve), the potential lifespans of a more complex, multicellular biosphere are estimated. Multicellular life was assumed able to persist until surface temperatures reach the moist greenhouse limit for an Earth analogue planet in the continuously habitable zone of the star-type in question. Microbial life is then assumed to dominate until either the maximum temperature for microbial life is exceeded, or until the star leaves the main sequence (whichever happens first). The average age of Earth-like planets was found by Lineweaver (2001) to be 6.4 +/– 0.9 Gyr based on estimates of the age distribution of terrestrial planets in the universe. This average age falls within microbial and uninhabitable stages for G and F type stars respectively, but falls within the multicellular life stage for K stars. Credit: Jack T. O’Malley-James.

Note the comparatively brief window for multicellular life in planets orbiting F-class stars when compared to a G-class star like our Sun, and note too that K-class stars (Alpha Centauri B is the nearest example) offer a much longer period of clement conditions for any planets in their habitable zone. The figure does not display M-class red dwarfs, but there the picture changes entirely because these stars can burn for trillions of years depending on their mass. If we do discover that life is possible on planets orbiting red dwarfs, then the time frame for intelligence to develop is proportionately extended.

With the universe now thought to be some 13.7 billion years old, is it possible that most intelligent species simply haven’t had time to appear on the scene? With up to 80 percent of the stars in our galaxy being red dwarfs, we may exist early in the overall picture of living intelligence, and most of it may evolve around stars far different than our own. Yesterday I talked about our gradual tightening of the number for eta-Earth (ηEarth), the percentage of Sun-like stars with planets like ours in their habitable zone. What we are still in the dark about is eta-Intelligence (ηIntelligence), the percentage of habitable zone planets with life that evolve intelligent species.

But back to F, G and K-class stars and what we do know. The O’Malley-James paper makes the significant point that G-class stars have a window for multicellular life that, based on the solitary example of our own planet, appears roughly the same length as the developmental period needed to produce it. And after the era of multicellular life, as the parent star swells toward red giant status, the era of microbial life returns for a still lengthy stretch, though shorter than the one that began it. Thus the reasonable statement “It is entirely possible that some future discoveries of habitable exoplanets will be planets that are nearing the end of their habitable lifetimes, i.e. with host stars nearing the end of their main sequence lifetimes.”

Without any knowledge of ηIntelligence, we can’t know what happens as the multicellular window begins to close. But if intelligence is not rare, then we can conceive of advanced civilizations taking the necessary steps to ensure their survival, either through migration to other star systems or massive engineering projects in space, perhaps remaining near the parent star. The kind of ‘interstellar archaeology’ championed by those who search for Dyson spheres and other massive constructs is an attempt to find projects like these, a form of SETI that is not reliant on the intent of a civilization to make contact and one that does not assume radio or optical beacons.

Which would be harder to detect: 1) the biosignature of single-celled life on a planet orbiting a dying star or 2) the infrared or visual signature of large-scale engineering near or around the same kind of star, as conducted by Kardashev Type II civilizations or higher?

I don’t have an easy answer for that because we know so little about what an advanced civilization might do to save itself, but it seems reasonable to pursue ‘interstellar archaeology’ with as much vigor as other forms of SETI. Certainly the boundaries of the discipline are expanding. Meanwhile, the O’Malley-James paper (citation in yesterday’s entry) points to the beginning of a much larger project that looks at extremophile biosignatures as a way of preparing us for the day when detailed information about terrestrial planetary atmospheres becomes available.

And the feeling persists: If M-class dwarfs are the wild card, what sort of hand has the universe dealt us? Are we, with our bright yellow sun that moves across the sky, the real outliers?