Astrobiology: The Necessity of Asteroids

Let’s talk this morning about the ‘snow line,’ the boundary in the Solar System beyond which volatiles like water ice remain cold enough to keep intact. Rebecca Martin (University of Colorado) and Mario Livio (Space Telescope Science Institute) have been running simulations using models of planet-forming disks around young stars. The idea: To calculate the location of the snow line in these disks as measured against the mass of the central star. Their hypothesis is that asteroid belts in other solar systems will be located at the snow line, with implications for life.

Here’s the thinking on this. We know that asteroids, in addition to creating impact threats that can trigger world-changing events, may also have had a crucial role delivering water and organic compounds to the early Earth. Occasional asteroid impacts, says the theory of punctuated equilibrium, may have accelerated biological evolution, forcing species to adapt to rapidly changing conditions. And there are still other possibilities, as the paper notes (I’ve removed the internal citations for brevity):

The formation of large moons may also require an asteroid collision…although here again, a different origin for the impactor has been considered…Our Moon, for instance, stabilises the rotation axis of the Earth and prevents weather extremes that would have resulted from chaotic motion. This process may not be universal, since it depends on initial conditions. According to some hypotheses, life itself may have been delivered to Earth by an asteroid… Heavy elements, including some that are essential for life, were also probably delivered to the Earth’s crust through collisions… During the early times of formation the Earth was molten and its gravity pulled heavy elements to its core leaving the crust depleted of elements such as iron, gold and platinum.

The authors point out that if even one of these ideas is true, then the formation and evolution of asteroid belts may play a major role in the development of complex life.

But gas giants are also a major part of this picture. In our system, the gravitational influence of Jupiter plays a role in the development of the asteroid belt. The planet’s presence just beyond the snow line meant that nearby material inside its orbit could not form into planets, but instead settled into the belt of fragmented rocks that we see today. Livio explains it like this:

“To have such ideal conditions you need a giant planet like Jupiter that is just outside the asteroid belt [and] that migrated a little bit, but not through the belt. If a large planet like Jupiter migrates through the belt, it would scatter the material. If, on the other hand, a large planet did not migrate at all, that, too, is not good because the asteroid belt would be too massive. There would be so much bombardment from asteroids that life may never evolve.” 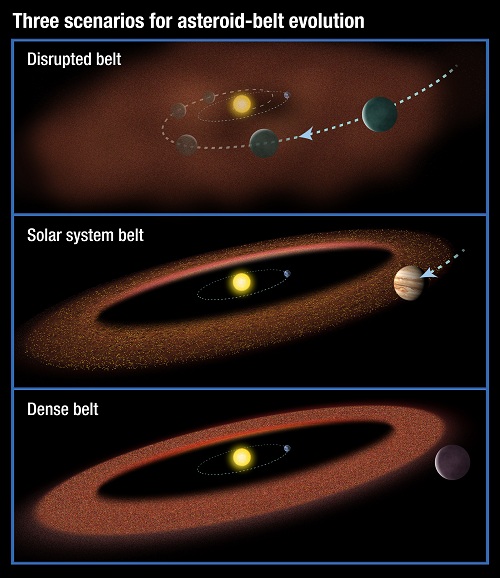 Image (click to enlarge): This illustration shows three possible scenarios for the evolution of asteroid belts. In the top panel, a Jupiter-size planet migrates through the asteroid belt, scattering material and inhibiting the formation of life on planets. The second scenario shows our solar-system model: a Jupiter-size planet that moves slightly inward but is just outside the asteroid belt. In the third illustration, a large planet does not migrate at all, creating a massive asteroid belt. Material from the hefty asteroid belt would bombard planets, possibly preventing life from evolving. Illustration Credit: NASA, ESA, and A. Feild (STScI). Science Credit: NASA, ESA, R. Martin and M. Livio (STScI).

Back to the simulations. Martin and Livio put their models to work to test their proposition that asteroid belts in other solar systems would be located in the vicinity of the snow line. They examined 90 stars known from observations with the Spitzer Space Telescope to have warm dust that could indicate the presence of an asteroid belt, finding that the temperature of the dust was consistent with the snow line around these stars. The researchers also studied 520 giant planets outside our Solar System, finding only 19 of them residing outside the snow line.

The suggestion is that most of the giant planets that originally formed outside the snow line have migrated too far inward to preserve the kind of asteroid belt that would enhance evolution on inner, terrestrial worlds. The ideal circumstance is a gas giant placed just outside the snow line, like Jupiter, where the planetesimals of an early solar system are too gravitationally disturbed to coalesce into planets. Only four percent of the observed gas giants are found in this position.

If Martin and Livio are right, then our best chance to find living worlds is to find systems where gas giant planets exist outside the snow line. But even here, the conditions are narrowly defined:

Inward migration disrupts the asteroid belt. Terrestrial planets may still form from scattered planetesimals in the habitable zone after the migration, but if asteroid belts are indeed necessary for complex life to evolve, then such evolution is unlikely in these systems. On the other hand, a small amount of giant planet migration may be necessary to remove a signiﬁcant fraction of the initial belt mass because otherwise there would be too many devastating impacts on the planet
for life to evolve. Consequently, there appears to be a very narrow “window of opportunity” of time during which the giant planet should form, in order for the correct amount of migration to take place – potentially making our solar system even more special.

In other words, too populous an asteroid belt would lead to too many impacts on inner worlds, while the lack of an asteroid belt could mean complex life would be unlikely to develop on these worlds in the first place. The placement of the gas giant becomes a critical parameter.

The authors are quick to note that selection effects may be at play in their data. While our radial velocity techniques are improving all the time, it is still difficult to observe planets in long-period orbits, which makes it likely that, over time, we will find more gas giants outside the snow line than the four percent referred to above. Whatever the actual percentage of gas giants outside the snow line turns out to be, the authors argue that systems with a gas giant outside an asteroid belt will still be the best places to look for complex life.