An inventor named Tom Ditto has been casting a serious look at diffraction gratings as large primary collectors for telescopes, work that has been getting a bit of a buzz on the Internet. See, for example, An Old Idea Gives Telescopes a New Twist, and ponder how much the eponymous Dittoscope sounds like something out of a Tom Swift story. Nonetheless, an instrument based on a diffraction grating as its primary light-gathering source may prove useful in a variety of astronomical settings, including the ability to produce extremely high quality spectroscopic information for radial velocity exoplanet searches. 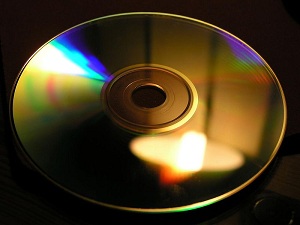 Image: Diffraction at work. The grooves of a compact disc can act as a grating and produce iridescent reflections. Credit: Wikimedia Commons.

In a presentation to the NASA Institute for Advanced Concepts back in 2007, Ditto showed that his Dittoscope could be conceptualized as a standard telescope capable of spectroscopy aimed at a flat grating. The standard telescope’s spectrometer has its own grating and slit. The use of the second spectrometer eliminates the overlapping spectra from the flat primary grating. Each object is thus imaged at a single wavelength at any unique angle of incidence. There are no moving parts other than the rotating Earth, with the instrument oriented east to west.

The ground based Dittoscope, then, takes advantage of the Earth’s rotation, as described in the presentation for Ditto’s Phase I study: “The precession of objects in the night sky causes their incident angles to rotate. For any incident angle there is a corresponding wavelength, so an entire spectrogram can be assembled over the course of a night.” With this enormous field of view — a 40 degree arc — millions of stars are placed within view simultaneously:

Since the output of the telescope is spectrographic, multiple object spectrometer problems are no longer the vexing issue of conventional telescopy. Every object has its spectrum taken. Stars do not need to be localized in advance of taking their spectra. There are spectral signatures for all objects in sight from first light.

Rather than tracking individual stars, the Dittoscope would simply let stars pass over the grating to detect the spectral changes of different wavelengths. As an online paper on this work notes: “There are expenses associated with the mounts, but the mechanical complexity is reduced to a single axis which is static during observation runs…” From a practical standpoint, small early experiments can be expanded in incremental steps until a full observatory is constructed.

Image: The roof is coming off the observatory. Gone are the domes, the sliding hatch doors and the rotating walls. A Dittoscope can lay flat to the ground. Its roof may be the primary objective. Wind resistance is negligible. The secondary optics are buried in a trough, and the ray paths can be protected within a pacified atmosphere, even a vacuum. Credit: Tom Ditto.

Note the other advantages that accrue from Ditto’s implementation of the idea. Because the diffracting grating primary collector is flat, many of the size constraints imposed on standard telescopes are eased, especially the requirement to contain heavy mirrors. Ditto’s paper argues that tolerance specifications for flatness in the axis of diffraction may not be prohibitive — he even talks about plate glass as a possible medium. All this points to the ability to construct enormous collecting surfaces at relatively low cost. One possibility Ditto mentions is a lunar observatory at the Moon’s equator that has no moving parts, returns detailed spectra for all objects along the zenith, and operates with a service life of decades.

Now think of this in terms of other space-based platforms. Theoretically, it would be possible to develop a collecting surface that can be stowed on board a launch vehicle in the form of rolls of kilometer-length membrane — Ditto evidently experimented in his prototypes with methods for printing diffraction gratings out on various kinds of industrial material packaging. Once in space, the rolls of collector membrane could be deployed by induced centrifugal forces.

Moreover, the Dittoscope can be segmented so that collectors of an arbitrarily large size can be constructed. As the system is deployed, it can be added to incrementally to achieve the needed specifications. Ditto explains the construction of a large, ground-based instrument: :

A very large collector can be constructed from thousands of identical smaller gratings on individual supports… Each table could support glass substrates for the grating elements. Piezo positioners or other micro-adjusters would be used to slide gratings into alignment relative to each other. Alignment of disparate segments could be achieved using a laser that targeted a test patch on each grating. The laser would work like a collimating laser. The adjusters would be used so that a calibration wave length appeared superimposed at the same position of the secondary sensors.

Ditto sees his instrument as an exoplanet detection tool that would provide the spectrographic information needed to do radial velocity work of extraordinarily high quality. Because the secondary can be a conventional telescope, the primary collector — the diffraction grating — can be located in a different place. We can envision a secondary telescope based on the ground being fed by a primary collector in Earth orbit, a system that would allow the collector to be shared among many existing ground-based telescopes.

Ditto’s intriguing proposal to the NASA Institute for Advanced Concepts was funded in 2006, allowing the construction of early prototypes. A Phase II grant proposal is now in the works. The Phase I proposal is “Primary Objective Grating Astronomical Telescope,” available at the NIAC site. Tom Ditto’s paper “The Dittoscope” explains the concept online. Thanks to John Kilis and Jason Wentworth, who provided invaluable pointers to this work.

Next post: Possible Habitable World in a Six-Planet System