Planets without stars may exist throughout the galaxy, and some studies suggest that there may be more so-called ‘rogue planets’ than main sequence stars. Now we get word of an object called CFBDSIR2149, associated with the stream of young stars called the AB Doradus Moving Group, a group of about 30 stars of the same age and metallicity associated with the star AB Doradus. The object turned up at infrared wavelengths in the Canada-France Brown Dwarfs Survey (CFBDS), which is looking for cool brown dwarf stars. If the object is indeed part of the AB Doradus group, then we can deduce that it is young (50-120 million years) and, according to this ESO news release, a number of its other properties can be inferred. 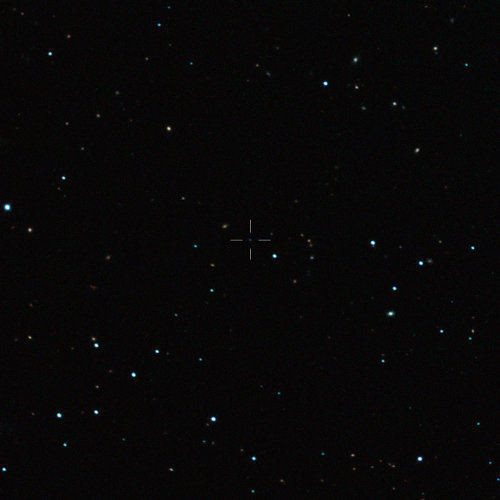 Image (click to enlarge): This image captured by the SOFI instrument on ESO’s New Technology Telescope at the La Silla Observatory shows the free-floating planet CFBDSIR J214947.2-040308.9 in infrared light. This object, which appears as a faint blue dot at the centre of the picture and is marked with a cross, is the closest such object to the Solar System. It does not orbit a star and hence does not shine by reflected light; the faint glow it emits can only be detected in infrared light. The object appears blueish in this near-infrared view because much of the light at longer infrared wavelengths is absorbed by methane and other molecules in the planet’s atmosphere. In visible light the object is so cool that it would only shine dimly with a deep red colour when seen close-up. Credit: ESO/P. Delorme

If the association with the AB Doradus group is assumed, then the possible planet is thought to be 4-7 times the mass of Jupiter, with an effective temperature of 430 degrees Celsius. This is the first time an isolated planet has been identified as part of a moving group, but the possibility remains that the association with the group is purely a matter of chance, in which case we could be looking at a small brown dwarf. However, if it really is a rogue planet, CFBDSIR2149 would be a useful find, according to Philippe Delorme (CNRS/Université Joseph Fourier, France):

“These objects are important, as they can either help us understand more about how planets may be ejected from planetary systems, or how very light objects can arise from the star formation process. If this little object is a planet that has been ejected from its native system, it conjures up the striking image of orphaned worlds, drifting in the emptiness of space.”

Bear in mind that we have had previous candidates for this kind of planet, including ‘free floating’ planets in the Orion Nebula (Philip Lucas and Patrick Roche, 2009), planetary mass objects near the star σ Orionis (Maria Rosa Zapatero Osorio, et al., 2000) and a population of ‘unbound or distant Jupiter-mass objects’ discovered through gravitational microlensing (MOA/OGLE, 2011). At about 100 light years from Earth, this new object would be the closest yet to our Solar System, an intriguing candidate for future study and the first to which we could assign an age.

The new work, led by Delorme, interestingly speculates that a small number of low-gravity late T-dwarfs may turn out to be free-floating planets.’ From the paper:

The conclusions for stellar and planetary formation models would also be far reaching. Either the planetary mass-ﬁeld brown dwarfs are mostly the result of a stellar formation process, which would conﬁrm the fragmentation of a molecular cloud can routinely form objects as light as a few Jupiter masses, [or] these objects are mostly ejected planets. In this case, given that massive planets are less easily ejected from their original stellar system than lower mass ones, and that lighter planets are much more common than heavier ones (see Bonﬁls et al. 2011, for instance), this would mean free-ﬂoating, frozen-down versions of Jupiters, Neptunes and perhaps Earths are common throughout the Milky Way interstellar ranges.

See Island Hopping to the Stars for more on this as seen through the work of Louis Strigari (Stanford University), who speculates that there may be up to 105 compact objects per main sequence star in the galaxy that are greater than the mass of Pluto.