When young Rod Hyde, fresh out of MIT, started working on starship design in mid-1972, there were not many fusion-based precedents for what he was up to. He had taken a summer job that would turn into a career at Lawrence Livermore National Laboratory, but right off the bat he was involved with Lowell Wood and John Nuckolls in a concept that would use a battery of lasers to create fusion reactions whose energy would be channeled out the back of the ship by magnetic nozzles. Wood and Nuckolls had been developing their ideas for years, after Nuckolls first began to ponder how to use laser fusion micro-explosions to drive a spacecraft.

Now the duo had a kid who had spent his previous summers working in a beet cannery, a recruit for Livermore who had run up high grades at MIT and had shown he could work like a demon once he put his mind to it. This would be his first technical job. Hyde went into full gear on containing the plasma from the fusion explosions with a magnetic field. If they could ignite fusion, the three researchers were looking at specific impulses of 300,000 seconds and maybe as high as a million.

The figure was staggering. The amount of time it takes one pound of fuel to produce one continual pound of thrust gives you the specific impulse figure. It’s one way to measure rocket performance. Putting the work of Hyde, Wood and Nuckolls in context, consider that the main engines of the Space Shuttle can turn out a specific impulse of about 455 seconds. Hyde couldn’t talk about the specifics of the fusion pellets and laser ignition in this engine when he presented it in late 1972 at a conference of the American Institute of Aeronautics and Astronautics in New Orleans, but even the declassified version made quite a splash. 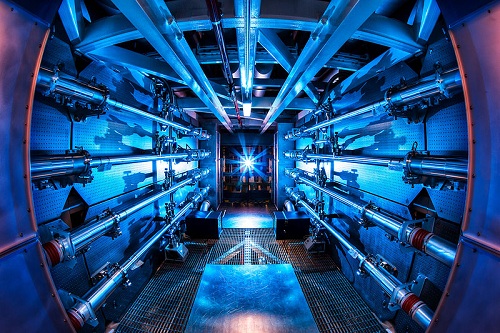 Image: We’re still trying to turn fusion into a reliable power source here on Earth. Pictured are the pre-amplifiers of the National Ignition Facility at LNLL. Will we ever find a way to use inertial confinement fusion powered by lasers on a spacecraft? Credit: Damien Jemison/LLNL.

Remember, this was shortly before Daedalus, the British Interplanetary Society’s starship design project that began in 1973. Daedalus would go on to develop a concept around inertial confinement fusion ideas produced by Friedwardt Winterberg, a theoretical physicist at the University of Nevada in Reno. In later years, Hyde would question some of the Daedalus work, about which more in a moment. For now, let me quote Thomas Heppenheimer, who wrote about the New Orleans conference and the starship design in his book The Man-Made Sun (Little Brown, 1984). Heppenheimer says the paper took the conference by storm:

Hyde stood up there at the podium and laid it all out: the physics, the design concepts, the calculations, the performance equations. Almost nobody in the audience had the background to follow him. Still, the paper was a blockbuster, for it had about it the aura of classified technology. People didn’t know much in those days about laser fusion, though it was considered quite a hot topic, but nobody could say why. Also, the word got around that Wood had had a hard time getting the paper cleared through classification so that it could be released. The government had just barely, and reluctantly, let it out. Then the requests for copies of the paper started pouring in.

And pour in they did. Wood had ordered two hundred reprints and surely thought he had grossly overestimated the demand, but the papers were gone in two months and the starship designers were sending out copies from the lab’s copy machines. The 19-year old Hyde found his paper being sought out by the White House and the National Security Council. Hyde would go on to develop a much longer report based on the paper, spending the ensuing years developing how the laser would work and covering details from radiation shielding to power equipment.

Yesterday I ran an image from the film Avatar to accompany the first of these articles on Hyde, Wood and Nuckolls’ ideas. The choice was deliberate because the ISV Venture Star has what many cinematic starships lack: A set of radiators. Think about the fact that while a rocket of any kind will produce heat, a vehicle like the Space Shuttle is also cooled by the flow of hydrogen fuel (over 440 pounds of hydrogen per second). Fusion engines can’t shed their heat as readily. They demand radiators that will glow red-hot as they carry the heat away. Hyde saw this early in the game and spent a lot of time working on the radiators and their supporting equipment.

The engine design that Hyde took to New Orleans was based on inertial confinement fusion as conceived by Wood and Nuckolls, a concept intended to move far beyond Orion, with its nuclear devices exploded behind the spacecraft to drive it forward. The new design would use frozen pellets of deuterium/tritium, each weighing 0.015 grams, 500 of which would be exploded by lasers every second. The result would be a tiny fireball whose charged particles would be turned into the exhaust beam by magnetic coils. The fireball would in turn press the magnetic field to induce current in a pickup coil, flowing into a capacitor whose discharge would fire the lasers.

When Hyde later looked at the Daedalus papers, developed not long after his initial work with Wood and Nuckolls, he balked over the issue of the fuel pellets, thinking that the design was unworkable. The Daedalus designers had based their pellet design on unclassified literature, but Hyde knew there was a great deal more about pellet design than could be reported in the press. When he ran the BIS’ pellets through the LASNEX computer code then in use at Livermore, he found they produced little thrust, and if re-engineered to create thrust, would melt the engine.

With breakeven fusion proving a tougher nut to crack than appeared likely in the 1970s, it’s almost wistful to look back at some of the excitement these methods produced in that era. Thomas Heppenheimer talked of using the Hyde/Wood/Nuckolls design to boost a spacecraft to ten percent of the speed of light for a flyby mission to a nearby star, diverting to another after the first encounter. A probe to Barnard’s Star, for example, would reach its target in 64 years, after which it would be re-deployed toward 70 Ophiuchi, which it would reach some 92 years later.

Today we’re re-examining the whole concept of inertial confinement fusion, with ongoing work at the National Ignition Facility located at Livermore. In starship terms, the Icarus project is massaging the Daedalus report to bring it up to speed with current thinking and technology, even as the question of flyby probes is giving way to a realization that without a means of decelerating, we’ve spent vast amounts of money on mere hours of close-in data. Whether the intense work that resulted in Hyde’s final designs will ever pay off in terms of an actual mission to a star remains to be seen, but the ideas he worked with at Livermore continue to be a vital part of interstellar studies, energizing continued work on the conundrum of fusion propulsion.

For more on all this, the original conference paper is Hyde, Wood and Nuckolls, “Prospects for Rocket Propulsion with Laser Initiated Fusion Microexplosions.” AIAA Paper 72-1063, American Institute of Aeronautics and Astronautics, November 1972.