The news from Reaction Engines Ltd. about its air-breathing rocket engine SABRE is interesting not only for its implications in near-term space development, but also for its pedigree. Reaction Engines grew out of British work on a single-stage-to-orbit concept called HOTOL ((Horizontal Take-Off and Landing) that was being developed by Rolls Royce and British Aerospace in the 1980s. Initially backed by the British government, HOTOL lost its funding in 1988, prompting Alan Bond’s decision to form the new company, which would continue the work with private funds. 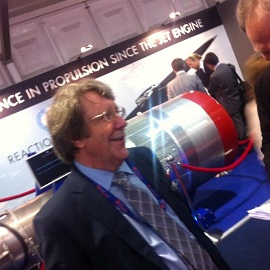 The name Alan Bond should ring many bells for Centauri Dreams readers. Bond was a key player in and leading author of the report on the British Interplanetary Society’s Project Daedalus, the ambitious 1970s attempt to design a starship based on fusion propulsion. One thing the extensive Daedalus effort made clear was that a future attempt to reach the stars could only take place within the context of a Solar System-wide infrastructure, one that would have the ability to mine the atmospheres of the outer planets for the needed helium-3 and other resources. It’s no surprise, then, that Bond’s attention should now be on that infrastructure and how to build it.

For one craft SABRE is intended to power is a reusable spaceplane called Skylon that would reach orbit in a single stage, lowering the cost per kilogram of payload substantially, perhaps to as little as $1000 or less. As presented by Reaction Engines, Skylon is anything but another Space Shuttle. It would take off from a conventional runway, accelerating to Mach 5.4 at 26 kilometers altitude before switching its engines over to internal liquid oxygen mode to take the craft to low-Earth orbit.

The project’s backers say they can carry up to 15 tonnes into orbit aboard the unpiloted craft, a payload that could also, using a habitation module, be comprised of up to 30 astronauts in a single launch vehicle. Upon delivery of its cargo or complement of astronauts, the vehicle would re-enter the Earth’s atmosphere and land back at the runway, undergoing inspection and any needed maintenance before, within two days, being returned to the flight line. If Skylon can live up to this ambitious scenario, then it will have given us what the Space Shuttle promised — reusability with quick turnaround — in a far more flexible and much less expensive design.

Much comes down, as you can imagine, to the SABRE engine. The acronym stands for Synergistic Air-Breathing Rocket Engine, a design that combines a turbo-compressor with an air pre-cooler that at high speeds can cool hot compressed air that will then be fed into the rocket combustion chamber, where liquid hydrogen will form the other part of the mixture to be ignited. The pre-cooler technology is the key. It allows the incoming airstream to be cooled from over 1000 degrees C to minus 150 C in less than 1/100th of a second without any frost blockage.

SABRE thus works initially in air-breathing mode, using the atmosphere as its source of oxygen for burning with the liquid hydrogen in the rocket combustion chamber. Once above the atmosphere, the craft makes the transition to conventional on-board liquid oxygen. The dual approach means that a vehicle like Sylon could save over 250 tons of on-board oxidant — no huge first stage that has to be jettisoned as soon as the oxidant is used up . The pre-cooler work is critical because in its air-breathing mode, SABRE has to compress the air to 140 atmospheres before injecting it into the combustion chamber. Without the new pre-cooler technology, that would raise the air temperatures high enough to melt engine materials. 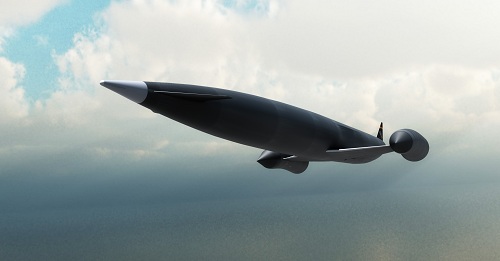 Recent tests on SABRE involving over 100 test runs at the Reaction Engines facility in Oxfordshire have demonstrated the workability of the concept in the eyes of the European Space Agency, which has been funding part of the work. This Reaction Engines news release quotes ESA’s evaluation: “The pre-cooler test objectives have all been successfully met and ESA are satisfied that the tests demonstrate the technology required for the SABRE engine development.” The successful pre-cooler testing should allow the release of additional funding for the Skylon project from the British government according to an April 2011 agreement.

As for Alan Bond, he’s convinced Reaction Engines has proven its point:

“These successful tests represent a fundamental breakthrough in propulsion technology. Reaction Engines’ lightweight heat exchangers are going to force a radical re-think of the design of the underlying thermodynamic cycles of aerospace engines. These new cycles will open up completely different operational characteristics such as high Mach cruise and low cost, re-usable space access, as the European Space Agency’s validation of Reaction Engines’ SABRE engine has confirmed. The REL team has been trying to solve this problem for over 30 years and we’ve finally done it. Innovation doesn’t happen overnight. Independent experts have confirmed that the full engine can now be demonstrated. The SABRE engine has the potential to revolutionise our lives in the 21st century in the way the jet engine did in the 20th Century. This is the proudest moment of my life.”

You have to imagine that amidst that pride there is a bit of the old Daedalus excitement lingering in Bond’s work with Skylon, given that lowering launch costs by more than ten times is a necessary first step toward the infrastructure he foresaw as far back as the 1970s, when the Daedalus designers crunched numbers and sketched ideas at the Mason’s Arms pub on Maddox Street in London. But while Daedalus was speculative and, for its time, science fictional in its ambitions, Reaction Engines is now working with a design that could have a payoff in the not so distant future. We build out an infrastructure one step at a time, but the first step is to get into position. Cheap access to low-Earth orbit opens up scenarios that may one day take us far beyond our planet.