Unexpectedly waking this morning despite Mayan prophecy, I suddenly remembered the storms that had kept me up for an hour during the night. There was little rain, but the winds were gusting and I could hear trees branches slapping against the siding and dogs baying inside nearby houses. When I got up to look out the window, city light under the overcast created a dim bronze aura. You would think it was the end of the world, but this morning I was delighted to see in the paper that a gathering of spiritualists in Mexico says we are not at the end of the world but the beginning of a new one. Up ahead: New powers of telepathy and levitation for us all.

I was never into the Mayan thing enough to know whether it involved the end of just our world or the entire cosmos, but I would guess that any extraterrestrial civilizations, if they’re out there, have likely had their share of doomsday prophets. And as I await my new powers of levitation (not working yet, but maybe by this afternoon), I’m thinking about Fermi’s ‘where are they’ question as we consider our place in the universe. All such speculation plays into so-called ‘percolation theory,’ which was developed to analyze the diffusion of liquids through porous materials, and which can be invoked to study growing civilizations. How do civilizations spread?

This is exactly what Thomas Hair and Andrew Hedman (Florida Gulf Coast University) ponder in a new paper modeling the spatial emergence of an interstellar civilization. Percolation theory asks what happens when we pour a liquid onto porous material, tracing its path from hole to hole. But the authors work the question around to this: What happens when a civilization spreads out into the galaxy from a distant star and continues to expand its presence at an ever-increasing rate. Will a colony inevitably get close enough to the Earth that we will be able to notice its presence?

Many explanations for the Fermi paradox exist, but Hair and Hedman want to look at the possibility that starflight is so long and difficult that it takes vast amounts of time (measured in geologic epochs) to colonize on the galactic scale. Given that scenario, large voids within the colonized regions may still persist and remain uninhabited. If the Earth were located inside one of these voids we would not be aware of the extraterrestrial expansion. A second possibility is that starflight is so hard to achieve that other civilizations have simply not had time to reach us despite having, by some calculations, as much as 5 billion years to have done so (the latter figure comes from Charles Lineweaver, and I’ll have more to say about it in a moment). 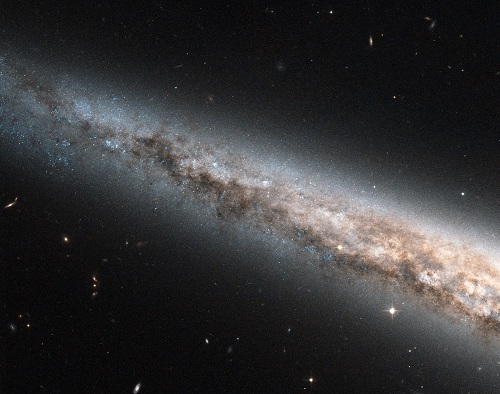 Image: A detailed view of part of the disc of the spiral galaxy NGC 4565. Have technological civilizations had time enough to spread through an entire galaxy, and if so, would they be detectable? Credit: ESA/NASA.

The authors work with an algorithm that allows modeling of the expansion from the original star, running through iterations that allow emigration patterns to be analyzed in light of these prospects. It turns out that in 250 iterations, covering 250,000 years, a civilization most likely to emigrate will travel about 500 light years, for a rate of expansion that is approximately one-fourth of the maximum travel speed of one percent of the speed of light, the conservative figure chosen for this investigation. A civilization would spread through the galaxy in less than 50 million years.

These are striking numbers. Given five billion years to work with, the first civilization to develop starfaring capabilities could have colonized the Milky Way not one but 100 times. The idea that it takes billions of years to accomplish a galaxy-wide expansion fails the test of this modeling. Moreover, the idea of voids inside colonized space fails to explain the Fermi paradox as well:

…while interior voids exist at lower values of c initially, most large interior voids become colonized after long periods regardless of the cardinal value chosen, leaving behind only relatively small voids. In an examination of several 250 Kyr models with a wide range of parameters, the largest interior void encountered was roughly 30 light years in diameter. Since humans have been broadcasting radio since the early 20th century and actively listening to radio signals from space since 1960 (Time 1960), it is highly unlikely that the Earth is located in a void large enough to remain undiscovered to the present day. It follows that the second explanation of Fermi’s Paradox (Landis 1998) is not supported by the model presented.

There are mitigating factors that can slow down what the authors call the ‘explosively exponential nature’ of expansion, in which a parent colony produces daughter colonies and the daughters continue to do the same ad infinitum. The paper’s model suggests that intense competition for new worlds can spring up in the expanding wavefront of colonization. At the same time, moving into interior voids to fill them with colonies slows the outward expansion. But even models set up to reduce competition between colonies present the same result: Fermi’s lunchtime calculations seem to be valid, and the fact that we do not see evidence of other civilizations suggests that this kind of galactic expansion has not yet taken place.

Temporal Dispersion into the Galaxy

I can’t discuss Hair and Hedman’s work without reference to Hair’s earlier paper on the expansion of extraterrestrial civilizations over time. Tom had sent me this one in 2011 and I worked it into the Centauri Dreams queue before getting sidetracked by preparations for the 100 Year Starship symposium in Orlando. If I had been on the ball, I would have run an analysis of Tom’s paper at the time, but the delay gives me the opportunity to consider the two papers together, which turns out to work because they are a natural fit.

For you can see that Hair’s spatial analysis goes hand in glove with the question of why an extraterrestrial intelligence might avoid making its presence known. Given that models of expansion point to a galaxy that can be colonized many times over before humans ever emerged on our planet, let’s take up a classic answer to the Fermi paradox, that the ‘zoo hypothesis’ is in effect, a policy of non-interference in local affairs for whatever reason. Initially compelling, the idea seems to break down under close examination, given that it only takes one civilization to act contrary to it.

Hair uses Monte Carlo simulations, drawing on the work of Charles Lineweaver and the latter’s estimate that planets began forming approximately 9.3 billion years ago. Using Earth as a model and assuming that life emerged here about 600 million years after formation, we get an estimate of 8.7 billion years ago for the appearance of the first life in the Milky Way. Factoring in how long it took for complex land-dwelling organisms to evolve (3.7 billion years), Lineweaver concludes that the conditions necessary to support intelligent life in the universe could have been present for at least 5.0 billion years. At some point in that 5 billion years, if other intelligent species exist, the first civilization arose. Hair’s modeling goes to work on how long this civilization would have had to itself before other intelligence emerged. The question thus has Fermi implications:

…even if this ﬁrst grand civilization is long gone . . . could their initial legacy live on in the form of a passed down tradition? Beyond this, it does not even have to be the ﬁrst civilization, but simply the ﬁrst to spread its doctrine and control over a large volume of the galaxy. If just one civilization gained this hegemony in the distant past, it could form an unbroken chain of taboo against rapacious colonization in favour of non-interference in those civilizations that follow. The uniformity of motive concept previously mentioned would become moot in such a situation.

Thus the Zoo Hypothesis begins to look a bit more plausible if we have each subsequent civilization emerging into a galaxy monitored by a vastly more ancient predecessor who has established the basic rules for interaction between intelligent species. The details of Hair’s modeling are found in the paper, but the conclusions are startling, at least to me:

The zoo hypothesis indeed. A galactic model of non-interference is a tough sell because of the assumed diversity between cultures emerging on a vast array of worlds over time. But Hair’s ‘modified zoo hypothesis’ has great appeal. It assumes that the oldest civilization in the galaxy has a 100 million year head start, allowing it to become hugely influential in monitoring or perhaps controlling emerging civilizations. We would thus be talking about the possibility of evolving similar cultural standards with regard to contact as civilizations follow the lead of this assumed first intelligence when expanding into the galaxy. It’s an answer to Fermi that holds out hope we are not alone, and I’ll count that as still another encouraging thought on the day the world didn’t end.