In a sobering start to the New Year, at least for partisans of manned missions to deep space, new work out of the University of Rochester indicates that galactic cosmic radiation may accelerate the onset of Alzheimer’s disease. The study, led by the university’s Kerry O’Banion, is hardly the first time that the impact of radiation in space has been studied, with previous work aimed at cancer risks as well as cardiovascular and musculoskeletal issues. But O’Banion’s work points to radiation’s effects on biological processes in the brain, reaching striking conclusions:

“Galactic cosmic radiation poses a significant threat to future astronauts,” said O’Banion. “The possibility that radiation exposure in space may give rise to health problems such as cancer has long been recognized. However, this study shows for the first time that exposure to radiation levels equivalent to a mission to Mars could produce cognitive problems and speed up changes in the brain that are associated with Alzheimer’s disease.”

Neurological damage from human missions to deep space — and the study goes no further than the relatively close Mars — would obviously affect our planning and create serious payload constraints given the need for what might have to be massive shielding. I’m already seeing this work being referred to (not by these researchers, to be sure) in the context of the Fermi paradox, which is an interesting speculation in itself, the idea being that if space is inherently hostile to human biology, these conditions may have prevented other species from tackling interstellar journeys. But before we get into that, let’s take a closer look at how the study was put together. 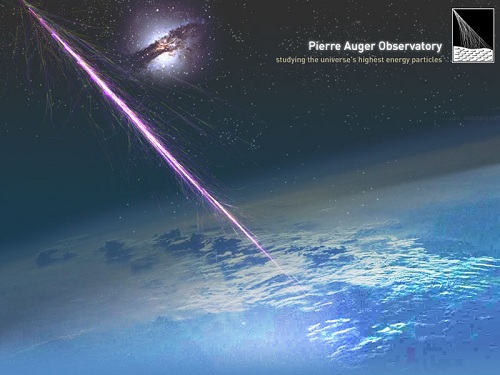 Image: An artist’s illustration of a cosmic ray striking the Earth’s atmosphere and creating a shower of secondary particles detectable on the surface. That high energy fundamental particles are barreling through the universe has been known for about a century. Because ultra high energy cosmic rays are so rare and because their extrapolated directions are so imprecise, no progenitor objects have ever been unambiguously implied. 2007 results from the Pierre Auger Observatory, however, indicate that 12 of 15 ultra high energy cosmic rays have sky directions statistically consistent with the positions of nearby active galactic nuclei. Whatever the source, does such space radiation present a show-stopper for manned missions to deep space? Credit: Robert Nemiroff & Jerry Bonnell / Pierre Auger Observatory Team.

At the heart of the work are high-energy, high-charged particles (HZE) which exist in low but continuous levels in deep space. Among the different HZE particles, the focus of the O’Banion team’s work is 56Fe — iron particles — which are speedy and massive enough to create serious shielding problems. To examine the issue, O’Banion exposed laboratory mice to doses of radiation comparable to what astronauts would experience on a trip to Mars, working partly at NASA’s Space Radiation Laboratory at Brookhaven National Laboratory (Long Island).

The mice were then put through a variety of experiments to gauge the cognitive and biological effect of the exposure. The result: Their encounter with radiation resulted in what the paper calls ‘enhanced AD [Alzheimer’s disease] plaque pathology,” with higher than normal accumulations of beta amyloid, the protein plaque now considered a marker for the disease. From the paper (internal references omitted for brevity):

The doses used in this study are comparable to those astronauts will see on a mission to Mars, raising concerns about a heightened chance of debilitating dementia occurring long after the mission is over. Increased plaque progression could be due to a variety of mechanisms. A primary mechanism of radiation injury is DNA damage and reactive oxygen species production that can contribute to overall cell dysfunction. In addition, radiation is also known to cause glial activation and inflammatory cytokine production, both of which have been implicated in neurodegenerative diseases like AD. In our study, GCR exposure could amplify the chronic inflammatory AD state and speed up pathology.

The mice were also run through experiments involving recall of objects and locations, with the researchers finding that the group exposed to radiation was far more likely to fail at these tasks, suggesting an earlier onset of neurological impairment than normal. The paper stresses this caveat: The mice were exposed to a single kind of galactic cosmic radiation at acute levels of exposure. “It is not known how the CNS [central nervous system] will respond to the complex and chronic low-dose GCR environment of space. Moreover, astronauts will not likely be familial AD carriers. Therefore, while many of the pathological processes are believed to be similar, this model does not reflect the complete human condition.”

So the model is tightly focused, but the one aspect of deep space radiation the researchers can replicate is troubling. Whole body exposure to 56Fe particle HZE radiation appears to enhance the progression of Alzheimer’s disease. You can read more about this work in this University of Rochester news release. The paper itself is Cherry et al., “Galactic Cosmic Radiation Leads to Cognitive Impairment and Increased Aβ Plaque Accumulation in a Mouse Model of Alzheimer’s Disease,” PLoS ONE 7(12): e53275 (available online).

Back briefly to the Fermi issue, which in my judgment remains unaffected by the question of radiation danger. We do not need to assume that a wave of interstellar probes, whether self-replicating or not, would have to be manned by biological creatures. In fact, assuming they’re not, we can stop worrying about mission times of a human life-span or less and think about a galaxy penetrated by artificial intelligence gradually moving from star to star, perhaps leaving observation stations along the way. Given enough time, the galaxy would be infused with the technology of a single species which would never need to expose itself to deep space.