The American Astronomical Society’s meeting in Long Beach is going to occupy us for several days, and not always with exoplanet news. Brown dwarfs, those other recent entrants into the gallery of research targets, continue to make waves as we learn more about their nature and distribution. The hope of finding a brown dwarf closer than Alpha Centauri has faded and recent work has emphasized that there may be fewer of these objects than thought — WISE data point to one brown dwarf for every six stars. But habitable planets around brown dwarfs are not inconceivable, and in any case we are continuing to build the census of nearby objects.

The latest from AAS offers up what could be considered a probe of brown dwarf ‘weather.’ If the idea of weather on a star seems odd, consider that the cooler brown dwarfs are far closer to gas giants than stars, unable to trigger hydrogen fusion and gradually cooling as they age. That means cloud patterns form and huge storms plow through the various atmospheric layers. At AAS, Daniel Apai (University of Arizona) presented the results of work on the brown dwarf 2MASSJ22282889-431026, which he conducted with a team led by the university’s Esther Buenzli. The results are useful not just for brown dwarf study but planetary atmospheres as well.

Using the Hubble and Spitzer space telescopes simultaneously, the researchers found that every ninety minutes the light from the star varied as it rotated. Because they were looking at the object at different wavelengths, they were able to see that the timing of the brightness change depended on wavelength. Some infrared wavelengths emerge from deep within the star, while others are blocked by water vapor and methane at higher altitudes. What we’re getting, in other words, is a look at layers of material being carried around the brown dwarf in likely storms.

But these aren’t your usual clouds, according to Mark Marley (NASA Ames), a co-author on the paper:

“Unlike the water clouds of Earth or the ammonia clouds of Jupiter, clouds on brown dwarfs are composed of hot grains of sand, liquid drops of iron, and other exotic compounds. So this large atmospheric disturbance found by Spitzer and Hubble gives a new meaning to the concept of extreme weather.”

The brown dwarf in question is cool in stellar terms but still hot enough — 600 to 700 degrees Celsius — to produce clouds like those Marley describes. The light variations offer the researchers a chance to understand the brown dwarf’s weather in the vertical dimension. Another scientist involved in the work is Adam Showman, also at the University of Arizona, who notes: “The data suggest regions on the brown dwarf where the weather is cloudy and rich in silicate vapor deep in the atmosphere coincide with balmier, drier conditions at higher altitudes — and vice versa.” 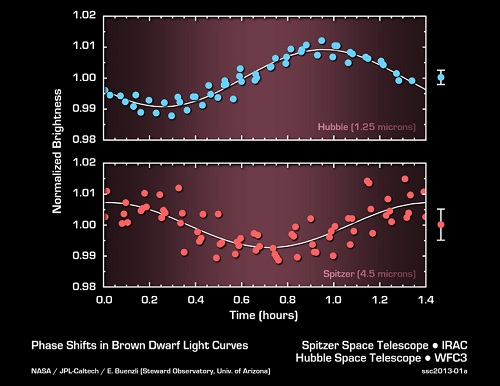 Image: This graph shows the brightness variations of the brown dwarf named 2MASSJ22282889-431026 measured simultaneously by both NASA’s Hubble and Spitzer space telescopes. As the object rotates every 1.4 hours, its emitted light periodically brightens and dims. Surprisingly, the timing, or phase, of the variations in brightness changes when measured at different wavelengths of infrared light. Spitzer and Hubble’s wavelengths probe different layers in the atmosphere of the brown dwarf. The phase shifts indicate complex clouds or weather patterns that change with altitude. Credit: NASA/JPL-Caltech.

A way forward in brown dwarf studies is suggested in the paper:

We have measured longitudinal variability throughout the near-infrared in a T6 dwarf and found an unusual correlation of light curve phase with the pressure probed by a given wavelength, which suggests a complex horizontal and vertical atmospheric structure. Our observations should provide an incentive to drive the development of higher-dimensional atmospheric models in order to gain a deeper understanding of dynamical and radiative processes in brown dwarf and exoplanet atmospheres.

Hubble and Spitzer are thus giving us the ability to probe a brown dwarf atmosphere in ways that, according to Apai, are not dissimilar to how doctors probe the body with medical imaging techniques. The unexpected offset between the different layers of atmospheric material tells us that a feature we might see on the surface of a brown dwarf may have shifted as we push into the inner layers of the object. That’s a sign of wind-driven clouds in constant motion, a warmer version of features like Jupiter’s Great Red Spot on an object not quite planet, not quite star.