Yesterday’s post on exomoons and their possibilities as abodes for life leads naturally to new work from René Heller (Leibniz Institute for Astrophysics, Potsdam) and Rory Barnes (University of Washington). We’re finding planets much larger and more massive than Earth in the habitable zone, as the recent findings of the Planet Hunters project attest. What can we say about the habitability of any large moons these planets may have? In their paper, Heller and Barnes look at the issues that separate exomoon habitability from habitability on an exoplanet itself. 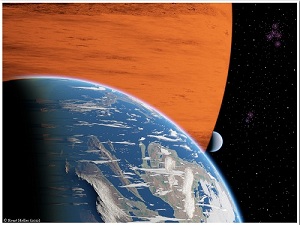 If Earth-sized satellites of giant planets exist, they may have certain advantages over terrestrial planets in the same orbit, depending on the host star. We know that M-class dwarfs are by far the most common kind of star in the galaxy, and that habitable zone planets around one of these will probably be tidally locked, with one hemisphere permanently facing the star and the other in permanent darkness. Extreme weather conditions would result, creating severe limitations on the size of any habitable regions. But an Earth-mass exomoon around a gas giant will be locked not to the star but to the planet, a configuration that could stabilize the climate and prevent the dark side atmosphere from freezing out and the bright side atmosphere from evaporating.

The stability of the atmosphere remains an issue, though, dependent on the size of the moon, the type of atmosphere and the intensity of incoming radiation. The researchers believe a nitrogen-dominated atmosphere would be stripped away by ionizing extreme ultraviolet radiation (EUV) in some habitable zone situations. This is interesting so let me quote the paper:

If Titan would be moved from its roughly 10AU orbit around the Sun to a distance of 1AU (AU being an astronomical unit, i.e. the average distance between the Sun and the Earth), then it would receive about 100 times more EUV radiation, leading to a rapid loss of its atmosphere due to the moon’s smaller mass, compared to the Earth. For an Earth-mass moon at 1AU from the Sun, EUV radiation would need to be less than seven times the Sun’s present-day EUV emission to allow for a long-term stability of a nitrogen atmosphere. CO2 provides substantial cooling of an atmosphere by infrared radiation, thereby counteracting thermal expansion and protecting an atmosphere’s nitrogen inventory.

For that matter, how massive does a moon need to be to create the magnetic shield that can sustain a long-lived atmosphere, and to drive tectonic activity and support a carbon-silicate cycle? The authors peg the figure at somewhere above 0.25 Earth masses, a figure that can be adjusted depending on the moon’s composition and structure. As I mentioned yesterday, the ongoing Hunt for Exomoons with Kepler (HEK) project pegs 0.2 Earth masses as the minimum size for an exomoon detection using current technology.

How large exomoons form is a question we’ve been kicking around here in the comments. If a gas giant is assumed to have formed well beyond the snow line and then migrated to its position in the habitable zone, would it bring with it a massive enough moon to sustain habitability? One recent paper (Canup and Ward, 2006) has shown that moons formed in the circum-planetary disk of a gas giant will have masses in the range of 10-4 times that of the planet’s mass. The paper runs through formation and capture scenarios and notes the work of Takanori Sasaki (Tokyo Institute of Technology), who suggests the formation of Earth-mass moons is indeed possible. We’re left with evolving ideas in what is clearly an active area of research.

Tidal heating is also a key factor in exomoon habitability, capable of causing intense magmatism and resurfacing on the moon’s surface in close orbits and enough volcanic activity to render the moon uninhabitable. But Heller and Barnes see scenarios where a moon becomes habitable only because of tidal heating, such as when the host planet orbits outside the outer edge of the habitable zone. For that matter, tidal heating can drive plate tectonics. Here the authors point to Europa, where tidal effect provides the heat to sustain a subsurface ocean of liquid water.

A theoretical model emerges, estimating the minimum distance a moon can be from its host planet and still allow habitability. The authors call the inner part of the circum-planetary habitable zone the ‘habitable edge.’ Moons inside the edge can run into runaway greenhouse effects because of tidal heating, while those outside the habitable edge are habitable by definition:

Similar to the circumstellar habitable zone of extrasolar planets… we conclude that more massive exomoons may have somewhat wider habitable zones around their host planets – of which the inner boundary is defined by the habitable edge and the outer boundary by Hill stability – than do less massive satellites. In future investigations it will be necessary to include simulations of the moons’ putative atmospheres and their responses to irradiation and tidal heating. Thus, our irradiation plus tidal heating model should be coupled to an energy balance or global climate model to allow for more realistic descriptions of exomoon habitability.

The minimum distance model for a planet to orbit and still be habitable should come in handy if we do find some candidate moons through the HEK project. “This concept will allow future astronomers to evaluate the habitability of extrasolar moons. There is a habitable zone for exomoons, it’s just a little different than the habitable zone for exoplanets,” Barnes said. But getting spectroscopic biosignatures in the atmospheres of any detected exomoons awaits next-generation space telescopes, so for now we’re left to use orbital configurations and studies of exomoon composition to assess potential habitability. One upcoming positive is the 2022 launch of ESA’s Jupiter Icy Moons Explorer mission, which should offer insights into the massive Galilean moons from tidal effects to surface chemistry and useful data on their interiors.

The paper is Heller and Barnes, “Exomoon habitability constrained by illumination and tidal heating,” accepted by Astrobiology (preprint). A news release from the Leibniz Institute for Astrophysics is available.