Pulsar Navigation: Beacons in the Darkness

In a world of search engines, GPS and always-on connectivity, I sometimes wonder what’s happening to serendipity. Over the years, I’ve made some of my best library finds by browsing the stacks, just taking some time off and walking around scanning the book titles. Odd ideas show up, mental connections get forged, and new insights emerge. Targeted searching is generally what we do (think Google), but never forget the value of the odd juxtaposition that comes from random wanderings. Too much targeting can produce tunnel vision.

For that matter, have you noticed how hard it is to get lost these days? I’m just back from Oakland, where Marc Millis and I went for interviews with the History Channel in the gorgeous setting of Chabot Space & Science Center in the hills above the city. The view on the drive up was spectacular, and my guide used an iPad to continually update our position on the map, so getting lost was impossible. My son Miles drove up from his home south of San Francisco and after the interview he drove me back to the hotel, where we met Marc for dinner at a nearby restaurant. All the way down from Chabot, he was keeping one eye on the smartphone he was using for navigation, flawlessly threading his way through streets that were new to him.

Maybe someday the whole idea of getting lost and running into the unexpected will seem quaint — we’ll know where we are at every moment. I can see the value in that even though I enjoy occasionally taking random streets just to see where they lead and surprising myself. Watching city lights under flawless night skies from my window on a Southwest flight last night, I was musing about navigation and stars and remembering being taught the now antiquated art of celestial navigation by a gruff flight instructor who used to do it for real back in the 1930s, when he was flying biplanes and knew how to read the stars like most of us read a roadmap.

Of course, navigating among the stars is going to demand much more precision than this when we’re talking about actual interstellar missions. This morning, pre-coffee and still jet lagged, I was looking through some saved links and ran across a BBC story called Dead Stars to Guide Spacecraft, recounting the work of Werner Becker (Max-Planck Institute for Extraterrestrial Physics). Becker’s team has been studying positioning methods for spacecraft using the X-ray signals sent by pulsars, rapidly rotating and extremely precise sources of emissions. 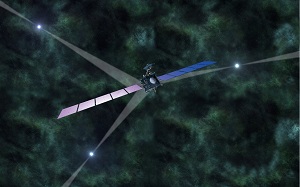 Pulsar beams are tightly focused and sweep around the sky as the pulsar spins. What we’re looking for is a way to place a spacecraft in a three-dimensional frame, taking advantage of the sheer regularity of pulsars by measuring the time of arrival of their pulses, which offer a stability akin to that of atomic clocks. Carrying the right equipment, our space voyagers should be able, in Becker’s view, to position themselves within five kilometers anywhere in the galaxy. As Becker tells the BBC’s Jonathan Amos, “These pulsars are everywhere in the Universe and their flashing is so predictable that it makes such an approach really straightforward.”

The accuracy of pulsars and their characteristic time signatures amount to a method of navigation that some are likening to GPS satellites and their signals here on Earth. The needed miniaturization for making X-ray detection practical as a navigation tool is on the way, and Becker believes that within fifteen to twenty years, lightweight X-ray mirrors for navigation devices based on pulsar methods will be available for testing. Their advantages may become quickly apparent if the technology is sound. Right now the positioning errors for the Voyager probes amount to several hundred kilometers, using Earth-based antennae and communications travel times to make the call.

I see that the UK’s National Physical Laboratory and the University of Leicester are working with the European Space Agency to investigate pulsar methods, noting that traditional ground-based space navigation is over-taxed, only able to support a limited number of spacecraft at a time. A future pulsar technology would allow spacecraft to handle navigation chores onboard.

So the benefits are near-term but could reach deep into the future. I like Werner Becker’s enthusiasm, as found in this Royal Astronomical Society news release: “Looking forward, it’s incredibly exciting to think that we have now the technology to chart our route to other stars and may even be able to help our descendants take their first steps into interstellar space.” Indeed. While I will always extoll the pleasures of serendipity, I wouldn’t want to be traveling at random on an interstellar journey, just as I was glad last night that Southwest’s crew was keeping an eye on their gauges while I mused on dark landscapes and distant lights as I crossed the continent.

Next post: The Last Pictures: Contemporary Pessimism and Hope for the Future