Deep Space Industries is announcing today that it will be engaged in asteroid prospecting through a fleet of small ‘Firefly’ spacecraft based on cubesat technologies, cutting the costs still further by launching in combination with communications satellites. The idea is to explore the small asteroids that come close to Earth, which exist in large numbers indeed. JPL analysts have concluded that as many as 100,000 Near Earth Objects larger than the Tunguska impactor (some 30 meters wide) are to be found, with roughly 7000 identified so far. So there’s no shortage of targets (see Greg Matloff’s Deflecting Asteroids in IEEE Spectrum for more on this.

‘Smaller, cheaper, faster’ is a one-time NASA mantra that DSI is now resurrecting through its Firefly spacecraft, each of which masses about 25 kilograms and takes advantages of advances in computing and miniaturization. In its initial announcement, company chairman Rick Tumlinson talked about a production line of Fireflies ready for action whenever an NEO came near the Earth. The first launches are slated to begin in 2015. Sample-return missions that are estimated to take between two and four years to complete are to commence the following year, with 25 to 70 kilograms of asteroid material becoming available for study. Absent a fiery plunge through the atmosphere, such samples will have their primordial composition and structure intact. 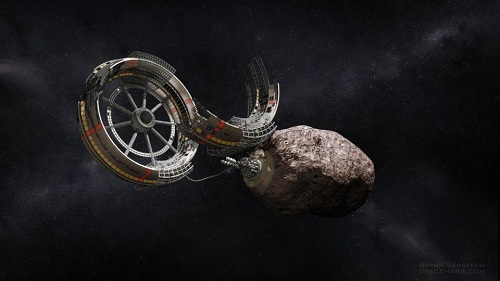 The Deep Space Industries announcement is to be streamed live later today. It will reflect the company’s ambitious game plan, one that relies on public involvement and corporate sponsorship to move the ball forward. David Gump is CEO of the new venture:

“The public will participate in FireFly and DragonFly missions via live feeds from Mission Control, online courses in asteroid mining sponsored by corporate marketers, and other innovative ways to open the doors wide. The Google Lunar X Prize, Unilever, and Red Bull each are spending tens of millions of dollars on space sponsorships, so the opportunity to sponsor a FireFly expedition into deep space will be enticing.”

The vision of exploiting space resources to forge a permanent presence there will not be unfamiliar to Centauri Dreams readers. Tumlinson sums up the agenda:

“We will only be visitors in space until we learn how to live off the land there. This is the Deep Space mission – to find, harvest and process the resources of space to help save our civilization and support the expansion of humanity beyond the Earth – and doing so in a step by step manner that leverages off our space legacy to create an amazing and hopeful future for humanity. We are squarely focused on giving new generations the opportunity to change not only this world, but all the worlds of tomorrow. Sounds like fun, doesn’t it?”

So we have asteroid sample return as part of the mix, but the larger strategy calls for the use of asteroid-derived products to power up space industries. The company talks about using asteroid-derived propellants to supply eventual manned missions to Mars and elsewhere, with Gump likening nearby asteroid resources to the Iron Range of Minnesota, which supplied Detroit’s car industry in the 20th Century. DSI foresees supplying propellant to communication satellites to extend their working lifetime, estimating that each extra month is worth $5 million to $8 million per satellite. The vision extends to harvesting building materials for subsequent technologies like space-based power stations. Like I said, the key word is ‘ambitious.’

“Mining asteroids for rare metals alone isn’t economical, but makes sense if you already are processing them for volatiles and bulk metals for in-space uses,” said Mark Sonter, a member of the DSI Board of Directors. “Turning asteroids into propellant and building materials damages no ecospheres since they are lifeless rocks left over from the formation of the solar system. Several hundred thousand that cross near Earth are available.”

In the near-term category, the company has a technology it’s calling MicroGravity Foundry that is designed to transform raw asteroid materials into metal parts for space missions. The 3D printer uses lasers to draw patterns in a nickel-charged gas medium, building up parts from the precision placement of nickel deposits. Because it does not require a gravitational field to work, the MicroGravity Foundry could be a tool used by deep space astronauts to create new parts aboard their spacecraft by printing replacements.

The team behind Deep Space Industries has experience in commercial space activities. Tumlinson, a well-known space advocate, was a founding trustee of the X Prize and founder of Orbital Outfitters, a commercial spacesuit company. Gump has done space-related TV work, producing a commercial shot on the International Space Station. He’s also a co-founder of Transformational Space Corporation. Geoffrey Notkin is the star of ‘Meteorite Men,’ a TV series about hunting meteorites. The question will be how successful DSI proves to be in leveraging that background to attract both customers and corporate sponsors.

With such bold objectives, I can only wish Deep Space Industries well. The idea of exploiting inexpensive CubeSat technology and combining it with continuing progress in miniaturizing digital tools is exciting, but the crucial validation will be in those early Firefly missions and the data they return. If DSI can proceed with the heavier sample return missions it now envisions, the competitive world of asteroid prospecting (think Planetary Resources) will have taken another step forward. Can a ‘land rush’ for asteroid resources spark the public’s interest, with all the ramifications that would hold for the future of commercial space? Could it be the beginning of the system-wide infrastructure we’ll have to build before we think of going interstellar?