Talking Back from Alpha Centauri

Back when I was working on my Centauri Dreams book, JPL’s James Lesh told me that the right way to do communications from Alpha Centauri was to use a laser. The problem is simple enough: Radio signals fall off in intensity with the square of their distance, so that a spacecraft twice as far from Earth as another sends back a signal with four times less the strength. Translate that into deep space terms and you’ve got a problem. Voyager puts out a 23-watt signal that has now spread to over one thousand times the diameter of the Earth. And we’re talking about a signal 20 billion times less powerful than the power to run a digital wristwatch.

Now imagine being in Alpha Centauri space and radiating back a radio signal that is 81,000,000 times weaker than what Voyager 2 sent back from Neptune. But lasers can help in a major way. Dispersion of the signal is negligible compared to radio, and optical signals can carry more information. Lesh is not a propulsion man so he leaves the problem of getting to Alpha Centauri to others. But his point was that if you could get a laser installation about the size of the Hubble Space Telescope into Centauri space, you could send back a useful datastream to Earth.

The probe would do that using a 20-watt laser system that would lock onto the Sun as its reference point and beam its signals to a 10-meter telescope in Earth orbit (placed there to avoid absorption effects in the atmosphere). It’s still a tough catch, because you’d have to use optical filters to remove the bright light of the Alpha Centauri system while retaining the laser signal.

But while the propulsion conundrum continues to bedevil us, progress on the laser front is heartening, as witness this news release from Goddard Space Flight Center. Scientists working with the Lunar Reconnaissance Orbiter have successfully beamed an image of the Mona Lisa to the spacecraft, sending the image embedded in laser pulses that normally track the spacecraft. It’s a matter of simultaneous laser communication and tracking, says David Smith (MIT), principal investigator on the LRA’s Lunar Orbiter Laser Altimeter instrument:

The Lunar Reconnaissance Orbiter, I was surprised to find, is the only satellite in orbit around a body other than Earth that is being tracked by laser, making it the ideal tool for demonstrating at least one-way laser communications. The work involved breaking the Mona Lisa into a 152 x 200 pixel array, with each pixel converted into a shade of gray represented by a number between 0 and 4095. According to the news release: “Each pixel was transmitted by a laser pulse, with the pulse being fired in one of 4,096 possible time slots during a brief time window allotted for laser tracking. The complete image was transmitted at a data rate of about 300 bits per second.” 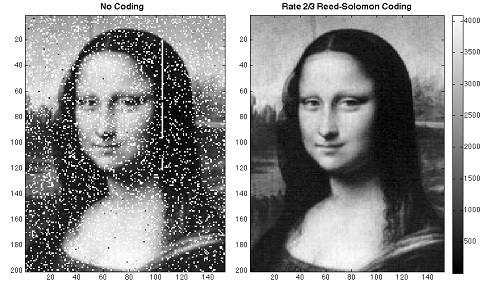 Image: NASA Goddard scientists transmitted an image of the Mona Lisa from Earth to the Lunar Reconnaissance Orbiter at the moon by piggybacking on laser pulses that routinely track the spacecraft. Credit: NASA Goddard Space Flight Center

The image was then returned to Earth using the spacecraft’s radio telemetry system. We’ll soon see where this leads, for NASA’s Lunar Atmosphere and Dust Environment Explorer mission will include further laser communications demonstrations. The robotic mission is scheduled for launch this year, and will in turn be followed by the Laser Communications Relay Demonstration (LCRD), scheduled for a 2017 launch aboard a Loral commercial satellite. LCRD will be NASA’s first long-duration optical communications mission, one that the agency considers part of the roadmap for construction of a space communications system based on lasers.

If we can make this work, data rates ten to one hundred times higher than available through traditional radio frequency systems can emerge using the same mass and power. Or you can go the other route (especially given payload constraints for deep space missions) and get the same data rate using much less mass and power. The LCRD demonstrator will help us see what’s ahead.

In any case, it’s clear that something has to give when we think about leaving the Solar System. Claudio Maccone has gone to work on bit error rate, that essential measure of signal quality that takes the erroneous bits received divided by the total number of bits transmitted. Suppose you tried to monitor a probe in Alpha Centauri space using one of the Deep Space Network’s 70-meter dishes. Maccone assumes a 12-meter inflatable antenna aboard the spacecraft, a link frequency in the Ka band (32 GHz), a bit rate of 32 kbps, and forty watts of transmitting power.

The result: A 50 percent probability of errors. We discussed all this in these pages a couple of years back in The Gravitational Lens and Communications, so I won’t rehash the whole thing other than to say that using the same parameters but working with a FOCAL probe using the Sun’s gravitational lens at 550 AU and beyond, Maccone shows that forty watts of transmitting power produce entirely acceptable bit error rates. Here again you have to have a probe in place before this kind of data return can begin, but getting a FOCAL probe into position could pay off in lowering the mass of the communications package aboard the interstellar probe.