What happens to us if our SETI efforts pay off? Numerous scenarios come to mind, all of them speculative, but the range of responses shown in Carl Sagan’s Contact may be something like the real outcome, with people of all descriptions reading into a distant message whatever they want to hear. Robert Lightfoot (South Georgia State College) decided to look at contact scenarios we know something more about, those that actually happened here on Earth. His presentation in Huntsville bore the title “Sorry, We Didn’t Mean to Break Your Culture.”

Known as ‘Sam’ to his friends, Lightfoot is a big, friendly man with an anthropologist’s eye for human nature. His talk made it clear that if we’re going to plan for a possible SETI reception, we should look at what happens when widely separated groups come into contact. Cultural diffusion can happen in two ways, the first being prompted by the exchange of material objects. In the SETI case, however, the non-material diffusion of ideas is the most likely outcome. Lightfoot refers to ‘objects of cultural destruction’ in both categories, noting the distorting effect these can have on a society as unexpected effects invariably appear.

Consider the introduction of Spam to the islands of the Pacific as a result of World War II. The level of obesity, cancer and diabetes soared as cultures that had relied largely on hunting, farming and fishing found themselves in the way of newfound supplies. Visitors to some of these islands still note with curiosity that Spam can be found on the menus of many restaurants. Today more than half of all Pacific islanders are obese, and one in four has diabetes. On the island nation of Tonga, fully 69 percent of the population is considered obese.

Lightfoot mentioned Tonga in his talk, but I drew the above figures from the World Diabetes Foundation. Can we relate the continuing health problems of the region to Spam? Surely it was one of the triggers, but we can also add that the large-scale industrialization of these islands didn’t begin until the 1970s. Imported food and the conversion of farmland to mining and other industries (Nauru is the classic example, with its land area almost entirely devoted to phosphate mining) meant a change in lifestyle that was sudden and has had enormous health consequences.

Objects of cultural destruction (OCDs) show their devastating effects around the globe. The Sami peoples of Finland had to deal with the introduction of snowmobiles, which you would have thought a blessing for these reindeer herders. But the result was the ability to collect far larger herds than ever before, which in turn has resulted in serious problems of over-grazing. Or consider nutmeg, once thought in Europe to be a cure for the plague, causing its value to soar higher than gold. Also considered an aphrodisiac, nutmeg led to violence against native growers in what is today Indonesia and played a role in the creation of the East India Company.

But because SETI’s effects are most likely going to be non-material, Lightfoot homed in on precedents like the ‘cargo cults’ of the Pacific that sprang up as some islanders tried to imitate what they had seen Westerners do, creating radios out of wood, building ‘runways’ and calling for supplies. In South Africa, a misunderstanding of missionary religious teachings led the Xhosa people to kill their cattle, even though their society was based on herding these animals. Waiting for a miracle after the killings, a hundred thousand people began to starve. Said Lightfoot:

Think about contact with an extraterrestrial civilization in this light. There will be new ideas galore, even the possibility of new objects — plants, animals, valuable jewels. Any or all of these could be destabilizing to our culture. And just as they may destabilize us, we may contaminate them. 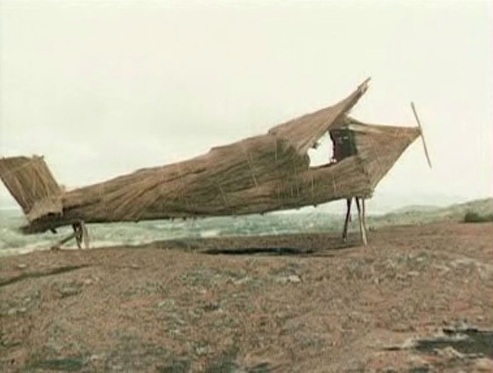 Image: Cargo cults reacted to advanced technology by trying to emulate it with their own tools, a reminder of the perils of contact between widely different cultures.

I think the most powerful message of Lightfoot’s talk was that this kind of destabilization can come where you would least expect it, and have irrevocable results. Tobacco, once used as a part of ritual ceremonies in the cultures where it grew, has become an object of cultural and medical destruction in our far more affluent society. Even something as innocuous as a tulip once became the object of economic speculation so intense that it created an economic bubble in 17th Century Holland and an ensuing economic panic.

What to do? Lightfoot told the crowd to search history for the lessons it contains about cultures meeting for the first time. We need to see when and why things went wrong in hopes of avoiding similar situations. If contact with an extraterrestrial culture someday comes, we’ll need a multidisciplinary approach to identify the areas where trouble is most likely to occur. A successful SETI reception could be the beginning of a philosophical and scientific revolution, or it could be the herald of cultural decline as we try to re-position our thinking about the cosmos.