When I was in Huntsville for the recent interstellar conference, I noticed people walking around with black rubber wristbands that said ‘Build a Star Ship.’ Space educator Mike Mongo was handing these out to all concerned, and I soon picked one up to give my grandson. They’re an interesting form of marketing — leave these in the right places and kids pick them up. Maybe it becomes a fad to wear them. The point is, you never know whose mind you might reach. And maybe once or twice, you give a wristband to a kid who starts dreaming about the stars, and pretty soon that leads to a course of study and then one day a career.

The Roman historian Plutarch said it best: “The mind is not a vessel to be filled, but a fire to be ignited.” And when ignition occurs, it’s often a sudden, passionate event rather than a slow building of sequential ideas. It’s that fire that drives subsequent study and makes long hours amidst the databases and classrooms pay off in the form of eventual insights and discoveries. I’m thinking maybe I’ll get a few more of Mike’s wristbands so my grandson can hand them out at school.

I think about reaching broader audiences every time I attend a conference, and in fact we did have an excellent public session on the last night of the Tennessee Valley Interstellar Workshop. It was held at Calhoun Community College, where Icarus Interstellar’s Bill Cress showed some of the video work he had done to promote the cause. I followed with my talk on gradual migration beyond the Solar System, tapping resources like the Oort cometary cloud and wandering ‘rogue’ planets without stars of their own. We capped the event with a panel discussion led by Les Johnson between Kelvin Long (Institute for Interstellar Studies), Richard Obousy (Icarus Interstellar), veteran space engineer Gordon Woodcock, Bill Kress and myself. The questions raised by the audience were excellent and we could have talked for hours if we had the time. 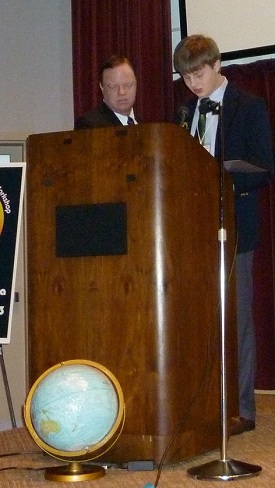 But beyond the public outreach in Huntsville there was a striking example of what I might call public ‘in-reach,’ in the form of William Lucas, a 15-year old high school student who, it is easy to predict, has a bright future ahead of him in whatever field he chooses. Les Johnson made an inspiring choice in scheduling William just after Jan Davis’ keynote address. What William seems to have done is to discover a gamma ray burst before anyone else, leading to a parade of complications with local authorities and even the US Air Force. His presentation was quiet, analytical and used slides and video to great effect. He totally won over his audience.

I’m thinking this is no mean feat. When I was 15 years old, I was reading science fiction magazines, getting crushes on various girls and writing bad poetry. And here was William Lucas, up in front of a room full of scientists and engineers many of whom were old enough to be his grandfather, making a world-class presentation as if this were the kind of thing he did every day. People were buzzing during the break about the skill with which he pulled this off.

Image: William Lucas, presenting his findings at the Tennessee Valley Interstellar Workshop. William’s cousin Paul Sample, who worked with him on the project, is on the left.

The story is this: On March 11, 2011 there occurred the Tōhoku earthquake and tsunami off Japan, leading to the release of radioactive materials at Fukushima, the largest nuclear problem since the Chernobyl disaster of 1986. Monitoring radiation levels around the globe was an imperative, and part of this monitoring took place on Radiation Network, an Internet site that displays radiation levels anywhere in the USA at any particular time. William Lucas is one of the monitors who use geiger counters to take ambient radiation levels, uploading their data automatically in real time using a software package called GeigerGraph.

William’s mother, Diana Neville Lucas, told the audience that her son had had a fascination with geiger counters for years, and he soon talked his parents into supplying him with a geiger counter of the kind used by geologists, one that can track a wide variety of radiation. An active member of Radiation Network, William was interested to see background radiation levels begin to rise during March as fallout from Fukushima moved into the global circulation pattern.

Then, on March 28, there came a sudden spike in the readings. On a calm Monday morning as William was setting out to go to school, levels climbed steadily for an hour far beyond even the enhanced levels caused by Fukushima. The results were automatically reported to the Radiation Network by William’s equipment, and soon his mother received a call from the Huntsville Fire Department saying there was a radiation problem at her house. It was only the beginning. First the Fire Department, then HazMat teams, even a SWAT team from local law enforcement arrived. Last to appear were representatives from the U.S. Air Force.

What exactly was going on at William’s house? After a thorough investigation, the idea that the Lucas family was engaged in some sort of illicit activities involving radioactive materials was disposed of, and in any case, the spike William’s equipment had recorded began to recede. But William was now on the case. Armed with graphs and a satellite view of his home in Huntsville, he described his year-long search for the answer. Google turned out to be the key, although he was sure that finding the answer could not be so simple as merely inserting a date into a search engine. But the method worked.

What William was seeing on his chart was the low curve of fallout from Fukushima with, he believes, a sudden spike caused by a gamma ray burst catalogued as GRB 110328A. The GRB, the result of events that occurred 3.8 billion years ago in the constellation Draco, was detected by the Swift satellite and is considered to be the result of a supermassive black hole destroying a star about the size of our own Sun. Coinciding with his data, the GRB occurred at 1257 UTC on March 28 when Draco was almost directly overhead at William’s location in Huntsville. The young man calmly told a rapt audience that he thereby claimed discovery of the GRB, which later in the day would be traced to Draco by the Swift satellite and subsequently catalogued. 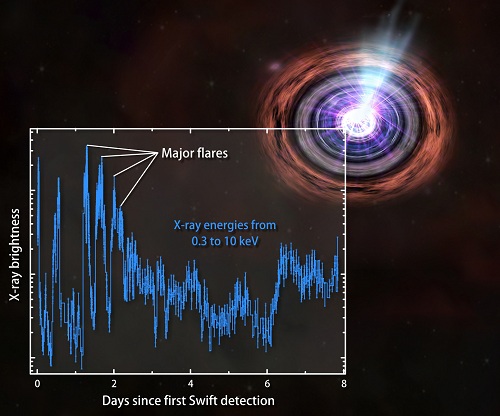 Image: GRB 110328A has repeatedly flared in the days following its discovery by Swift. This plot shows the brightness changes recorded by Swift’s X-ray Telescope. Credit: NASA/Swift/Penn State/J. Kennea.

William calls it the Draco Kill Shot. You can read more about GRB 110328A in NASA Telescopes Join Forces to Observe Unprecedented Explosion, which appeared on the Internet in early April of 2011. It’s considered to be the brightest and longest-lasting GRB ever observed, with high-energy radiation continuing to stream from its location a week after the event. Who would have thought an explosion that occurred 3.8 billion years ago would become part of the home investigations of a high schooler fascinated with radiation? For that matter, who just a few years ago would have dreamed that young minds would have so many useful tools at their disposal?

Today we have amateur astronomers aiding professionals in following up exoplanet finds and networks of people doing everything from cataloguing galaxies to monitoring marine debris and studying arthropods. With the tools of citizen science proliferating, we need to ramp up public outreach to show young people what can be done with modest equipment and dedication. I noticed that William Lucas and parents Diana and Richard stayed for the entire Huntsville workshop, a reminder that public interest once triggered can become a powerful ally in our work.