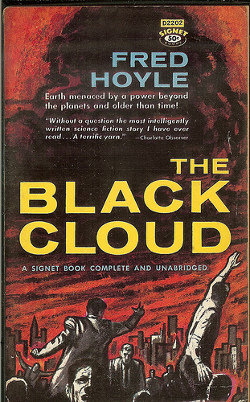 One of the first science fiction novels I ever read was The Black Cloud, by astrophysicist Fred Hoyle. I remember that one of my classmates had smuggled it into our grade school and soon we were passing it around covertly instead of reading whatever it was we had been assigned. In Hoyle’s novel, scientists discover that the cloud, which approaches the Solar System and decelerates, may be a life-form with which they can communicate. My young self was utterly absorbed by this book and I suspect it will hold up well to re-reading.

What brings The Black Cloud to mind is recent work using data from the Green Bank Telescope in West Virginia, where scientists have been studying an enormous gas cloud some 25,000 light years from Earth near the center of the Milky Way in the star forming region Sagittarius B2(N). This cloud is not, of course, behaving as entertainingly as Hoyle’s, but it’s offering up information about how interstellar molecules that are intermediate steps toward the final chemical processes that lead to biological molecules can form in space.

Although we’ve found interesting molecules in interstellar gas clouds before, the new work suggests that the chemical formation sequences for these molecules actually occurred on the surface of icy grains in interstellar space. One of the molecules is cyanomethanimine, which scientists believe is part of the process that produces adenine, one of four nucleobases forming the ‘rungs’ in the DNA lattice. The other is ethanamine, thought to play a similar role in the formation of alanine, one of twenty amino acids in the genetic code.

The biological interest is the suggestion that life’s building blocks are widely available, as noted in one of the two papers on this work:

One important goal of the field of astrobiology is the identification of chemical synthesis routes for the production of molecules important in the development of life that are consistent with the chemical inventory and physical conditions on newly formed planets. One mechanism for seeding planets with chemical precursors is delivery by outer solar system bodies, like comets or meteorites… These objects can be chemical reservoirs for the molecules produced in the interstellar medium during star and planet formation. The chemical inventory of these objects includes the molecules that are directly incorporated from the interstellar medium and molecules subsequently formed by chemical processing of the interstellar species…

What we’re after, then, is an understanding of the process by which interstellar molecules can undergo further change relevant to the formation of life. The paper continues: 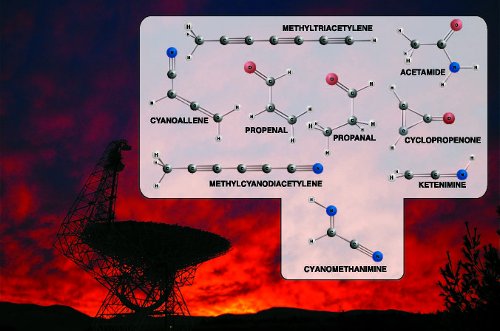 Image (click to enlarge): The Green Bank Telescope and some of the molecules it has discovered. Credit: Bill Saxton, NRAO/AUI/NSF.

The region under study, Sgr B2(N), turns out to be incredibly rich for this kind of work. According to the scientists, about half of the 170 molecules that have been detected in space were first found in this region. The team was able to measure the characteristic radio emission signatures of the rotational states of cosmic chemicals, using radio emission studies of cyanomethanimine and ethanamine and comparing these to the data generated by the Green Bank Telescope. “Finding these molecules in an interstellar gas cloud means that important building blocks for DNA and amino acids can ‘seed’ newly-formed planets with the chemical precursors for life,” says Anthony Remijan, of the National Radio Astronomy Observatory (NRAO).