Among the many memorable things Freeman Dyson has said in a lifetime of research, one that stands out for me is relatively recent. “Look for what is detectable, not for what is probable.” This was Dyson speaking at a TED conference in Monterey, CA back in 2003, making the point that the universe continually surprises us, and by making too many assumptions about what we are looking for, we may miss unexpected things that can advance our understanding. Dyson has been thinking about this for a long time considering that it was way back in 1960 that he first suggested looking for the excess infrared radiation that might flag a distant Dyson sphere.

I would call this an unorthodox approach to SETI in its day except that when he first came up with it, Dyson didn’t have a SETI effort to consider. It was only in the same year that Cornell’s Frank Drake began SETI observations at Green Bank, and a scant year before that that Philip Morrison and Giuseppe Cocconi published the seminal paper “Searching for Interstellar Communications” in Nature. SETI in 1960 was a nascent field, but it would soon be focused on radio and, later, optical transmissions. Even so, Dyson’s thinking remains viable and unorthodox SETI efforts continue. 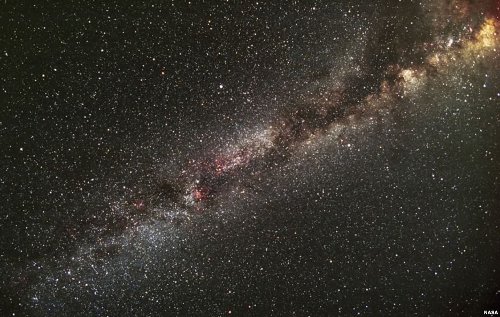 Image: Our Milky Way presents a field full of stars. How to search for signs of an extraterrestrial civilization among the countless targets? Looking for a Dyson sphere is unorthodox, but some scientists are suggesting this and other unusual ways of detecting the macro-engineering of distant civilizations. Image credit: NASA.

Luc Arnold (Aix Marseille Université) runs through the scholarship on what we might call ‘non-traditional’ forms of SETI in a new paper, noting that what he calls Dysonian SETI looks for signatures of macro-engineering projects in space. We’ve discussed many of these here before, delving particularly into the papers of Milan Ćirković and Robert Bradbury, but it’s worth recalling that others picked up on Dyson’s ideas earlier, including Carl Sagan and Russell Walker, who concluded as far back as 1966 that Dyson spheres should be detectable but would probably be hard to tell apart from natural objects having the same low temperatures.

In articles like Toward an Interstellar Archaeology, I’ve looked at Richard Carrigan’s searches for macro-engineering, and Luc Arnold reminds me in his new paper that Michael Harris has proposed methods of observing antimatter burning by advanced civilizations. Harris would go on in 2002 to use gamma ray observations in a first attempt to find such a signature. In fact, we can trace non-traditional SETI studies to authors as diverse as Ronald Bracewell, Michael Papagiannis and Robert Freitas, who along with several others Arnold references have followed Dyson’s lead in looking for what is detectable rather than what is probable.

Back to Arnold himself, who proposed in 2005 that transit studies like Kepler and CoRoT should be aware of the possibility of detecting an artificial signal. What the scientist has in mind is a planetary size object that orbits its star, constructed by a civilization as a celestial marker. The idea fits with something Jill Tarter said in 2001: “An advanced technology trying to attract the attention of an emerging technology, such as we are, might do so by producing signals that will be detected within the course of normal astronomical explorations of the cosmos.”

Transmission Methods and the Drake Equation

Arnold’s new paper compares radio wavelengths with laser transmissions and his own idea of artificial transits with respect to the factor L in the celebrated Drake Equation. L is generally considered to refer to the lifetime of a civilization, which obviously limits its ability to transmit a detectable signal. Working out the solid angle over which the transit could be ‘transmitted’ over one year, Arnold arrives at a figure of between 25,000 and 75,000 stars depending on stellar densities, and therefore uses a mean number of targets of 50,000 to set up comparisons between artificial transit ‘messaging’ and the more conventional radio and laser transmission options.

The idea is to examine efficiency as seen from the perspective of a transmitting civilization. A radio transmitter is the best choice for short-term messaging — a brief, highly targeted program of signaling — while lasers would require 102 times more energy. In terms of construction and maintenance, artificial transiting objects are more costly. They become interesting only for extremely long-term thinkers who are using the method to produce attention-getting signals where “…the transmitting time can be very long, possibly much longer than the lifetime on the civilization itself.”

Arnold notes that the shape of a transiting object shows up in the transit light curve, making the detection of an artificial planetary sized object a clear possibility. Weighing the costs and energy required to signal other stars, he concludes that if we make such a detection, it should be interpreted as the message of an old and perhaps defunct civilization. It would demonstrate at least that the lifetime of a technological civilization can be longer than several centuries.

It is also true that large artificial objects may be constructed for purposes other than communication. From the paper:

We may also argue that a civilization wanting to communicate with other beings also may want to leave a trace or an artifact in the galaxy that would survive much longer that the civilization itself. These two civilization behaviours seem not incompatible, but rather naturally linked and complementary, at least from an anthropocentric psychological point of view. But artificial planetary-sized objects may also be built for other technological purposes than communication, like energy gathering for example. Such macro-engineering achievements could be the result of natural technological evolution… making the will or desire of communication only an optional argument.

Arnold’s points are intriguing. SETI by radio and optical methods assumes we are looking for an active civilization. But lasers and radios fall silent when a civilization dies. Meanwhile, large artificial objects that transit their stars could remain indefinitely, markers of a culture that might have flourished billions of years ago and is now gone. The Dysonian approach of looking for macro-engineering thus offers the chance to do the kind of interstellar archaeology Richard Carrigan has championed through his exhaustive efforts. Turning up the signs of an artifact without any presumption of further communication still changes our view of the universe.

Who would construct a vast artificial occulter to send a signal to other stars? Several possibilities come to mind, including the idea that the occulting object might have been constructed for purposes other than being detected by another civilization. It is conceivable, though, that a dying culture would want to leave some trace of its existence. Because we are speculating on the motivations of extraterrestrials, we have no way of knowing. This is why Dyson’s idea of looking for what is detectable continues to resonate. Being surprised by the universe is part of our experience and there is no reason to expect that to change now.

The paper is Arnold, “Transmitting signals over interstellar distances: Three approaches compared in the context of the Drake equation,” accepted for publication in the International Journal of Astrobiology (preprint). Thanks to Antonio Tavani for the pointer to this paper.