Talking about issues of long-term maintenance and repair, as we have been for the past two days, raises the question of what we mean by ‘self-healing.’ As some commenters have noted, the recent Caltech work on computer chips that can recover from damage isn’t really healing at all. Caltech’s researchers zap the chip with a laser, but there is no frantic nanobot repair activity that follows. What happens instead is that sensors on the chip detect the drop in performance and go to work to route around the damage so the system as a whole can keep performing.

So the analogy with biological systems is far-fetched, and we might think instead of Internet traffic routing around localized disruptions. It’s still tremendously useful because CMOS (complementary metal–oxide–semiconductor) chips can start acting flaky depending on factors like temperature and power variations. Problems deep inside a chip generally force us to replace an entire piece of equipment — think cell phones — whereas a chip that can smooth out disruptions and continue to perform more or less as before would add to product life.

Restoring Function Inside the Chip

While the Caltech work proceeds, researchers at the University of Illinois at Urbana-Champaign have taken a different approach to electronic chips. They put tiny microcapsules filled with eutectic gallium-indium — chosen because it is highly conductive — into experimental circuits so that when the circuits were broken (the voltage falling to zero) the ruptured microcapsules ‘healed’ them within a millisecond. The voltage measured prior to the break was quickly restored. The team worked with microcapsules of different sizes to measure their effects, learning that a mixture of 0.01 mm and 0.2 mm capsules produced the best result.

The implications of this kind of work for future space missions were not lost on aerospace engineering professor Scott White, who told the BBC:

“The only avenue one has right now is to simply remove that circuitry when it fails and replace it — there is no way to manually go in and fix something like this… I think the real application area that you’ll see for something like this is in electronics which are incredibly difficult to repair or replace — think about satellites or interplanetary travel where it’s physically impossible to swap out something.” 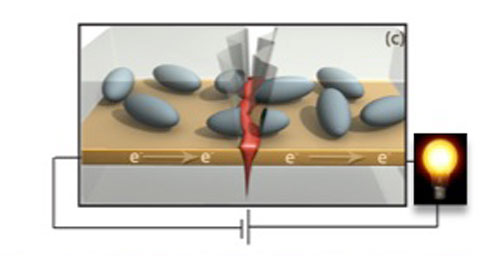 Image: Self-healing electronics. Microcapsules full of liquid metal sit atop a gold circuit. When the circuit is broken, the microcapsules rupture, filling in the crack and restoring the circuit. Credit: UIUC/Scott White.

All of this comes out of work into extending the lifetime of rechargeable batteries (see Self-healing electronic chip tests may aid space travel for more). White said that physically building new circuits every time we need new functionality may give way to circuits that last longer, circuits whose redesign is keyed more to software upgrades than constant hardware changes. Imagine cell phones rendered more sustainable by the presence of ‘self-healing’ circuitry that can repair tiny cracks that would otherwise cause the device to stop working.

We’ll see how the electronics industry reacts to these ideas when the technology becomes generally available. Meanwhile, the implications for deep space and other environments where chips are hard to replace are clear. This in turn reminds me of a study funded by the European Space Agency back in 2006. Carried out at the University of Bristol, it involved materials that could be used on the superstructure of space vehicles. Cracks caused by temperature extremes or the impact of dust grains traveling at several kilometers per second can build up over the lifetime of a mission, weakening the structure and threatening catastrophic failure.

The Bristol team, led by Christopher Semprimoschnig (ESTEC) inserted hollow fibers filled with adhesive materials into a resinous composite similar to that used in spacecraft components. The glass fibers were designed to break when any damage to the spacecraft ‘skin’ occurred, releasing the liquids needed to fill the cracks. Semprimoschnig likened the process to what happens when humans cut themselves and their blood hardens to form a protective seal that allows new skin to form underneath. This ESA news release provides more background. 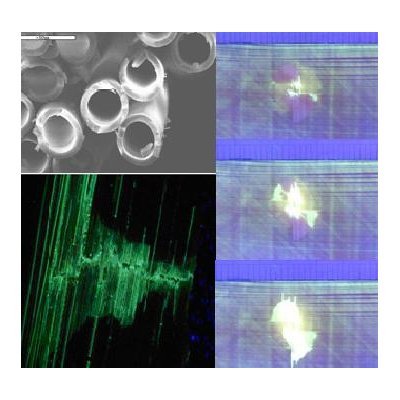 My assumption is that advances in both biology and nanotechnology are going to provide startling breakthroughs in materials that will make autonomous repair — whether we call it true ‘healing’ or not — possible in settings where no human intervention is possible. The worldships we talked about last week would be repaired and maintained by their inhabitants, but robotic probes on century-long journeys will need every tool in our arsenal to keep themselves functional. A truly autonomous spacecraft really does mimic biological systems in its ability to repair and adapt. Learning how to build it is a priority for future starship design.