Into the Orion Arm

Although we have little observational data to go on, the existence of the Oort Cloud simply makes sense. We see new comets coming into the inner system that are breaking up as they approach the Sun, obviously not candidates for long survival. There has to be a source containing billions of comets to account for those we do see. The Kuiper Belt is stuffed with what we can call ‘iceteroids,’ all moving more or less along the plane of the ecliptic until, well beyond the Kuiper Belt itself at about 10,000 AU, the disk shaped belt of material spreads into the spherical Oort Cloud. A nudge from a rogue planet or passing star is enough to produce the velocity change to send a comet inward.

We’ve been looking this week at possible human uses for cometary objects, including the fact that they’re rich in water but also nitrogen and carbon wrapped up in interesting organic compounds. From the standpoint of resource extraction, we also find interesting elements like silicon, sulfur, nickel, chromium, magnesium and iron available in at least small amounts. Tiny worlds a few kilometers in diameter, rich in resources and loaded with water, existing by the trillions. Surely a space-oriented civilization of the future will find a way to exploit them.

But it’s likely that long before we start talking about a human presence in the Oort Cloud, we’ll be engaged in robotic studies driven by the sheer necessity of protection. Recent near-miss asteroid events have raised public consciousness about near-Earth objects that could pose a threat to our planet. Comets can wreak havoc as well, with the difference that near-Earth objects are gradually becoming tracked and catalogued. With an NEO, we can plot trajectories that give us time to consider how to move an object that might not be projected to hit for decades.

Comets are different. We can’t predict when a new one is going to appear. Robert Zubrin points out that when the huge comet Hale-Bopp was detected in 1995, it was well beyond the orbit of Saturn, but moving at a speed sufficient to cross the Earth’s orbit a mere two years later. An object like this, massive and moving at high velocity, would have been all but impossible to deflect if we had learned it was headed for us. Deflecting a fast-moving comet, as opposed to a nearby asteroid, means getting to it when it is still deep in the outer system. Planetary protection will all but ensure we’ll have a presence in the Kuiper Belt and Oort Cloud one day. 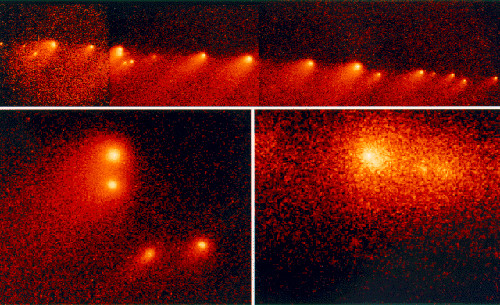 Image: Comet Shoemaker-Levy 9, torn into pieces as a result of a close approach to Jupiter in July 1992, before its later impact with that planet. The major cometary fragments range in size from one to a few kilometers. Credit: JPL.

Whether such a presence is largely robotic or not, it will spur the technologies we’ll eventually use for starflight. And not just the technologies — as we’ve seen, human settlements on O’Neill cylinders exploiting cometary resources would be case studies in isolation and social experimentation. Starships designed for fast crossings (multiple decades) or gradual voyaging (thousands of years) will have to incorporate what we’ve learned about people working together to keep communities in coherence when far from home. The Oort Cloud has a role to play.

The Fork in Interstellar Evolution

It’s possible that we may see two kinds of starflight in the next thousand years. I turn again to Richard Terra, whose article “Islands in the Sky” ran in the June, 1991 issue of Analog (it’s also reprinted in a 1996 hardcover from Wiley with the same name, a volume of essays edited by Stanley Schmidt and Robert Zubrin). Terra’s notion is that the wealthy inner system cultures will eventually develop what Ben Finney calls ‘fastships,’ spacecraft capable of moving at a substantial percentage of the speed of light. These will always be the first to cross the interstellar divide, but a slower wave of migration will follow.

The point is this: A small but growing human population in the Oort Cloud will master cometary motion, taking advantage of the fact that at 10,000 AU, the speed needed to orbit the Sun is just 300 meters per second. Compare this to the Earth’s 30,000 meters per second and it should be obvious that it takes only a small change in velocity to alter a comet’s orbit. We’ll have learned this in theory if not in practice because it factors into the engineering needed to divert a potentially dangerous comet from striking our planet decades in the future. Learn how to bump comets to change their orbits and you start thinking about what else you might do with such an object.

Interstellar space must be littered with comets that have been ejected from our system through the 4.6 billion years of its existence. Some estimates run as high as 1000 Earth masses in cometary material, so the resource base between us and the nearby stars should be plentiful. If Oort Cloud comets are separated by about 20 AU, these interstellar comets may be hundreds of thousands of AU from each other. The Oort Cloud should be in perpetual flux as some interstellar comets enter and move through it while other comets are pushed back out.

Let me quote Terra on this:

Some of these interlopers are bound to be found within Sol’s own Oort Cloud, working their way free of the Sun’s grip, at perhaps one in every several thousand. Relative velocities between Solar and interstellar comets will be low, and it will be tempting for Oort Cloud residents to hitch a ride outward — perhaps farther out into the permanent Cloud, perhaps out into interstellar space. Drifting outward at about 10 km/s or about 2 AU per year, they will make slow progress indeed. In 50,000 years they will be halfway to the nearest stars. But by then they will be wholly adapted to life in interstellar space and will perhaps not be too concerned with visiting other star systems.

So maybe there’s no one way to depict interstellar expansion. Fastships propelled perhaps by fusion or beaming technologies or antimatter may eventually cut the journey to decades. Over the millennia, a species fully adapted to living in space — and surely evolving in ways we’ll be unable to predict — will populate the outer system and move in slow generation ships between stars that may no longer be so much a destination as a curiosity. Perhaps some Oort Cloud communities will, as Terra suspects, alter a comet’s orbit so as to make a gravity assist maneuver around the Sun, all the while shielding the nucleus with solar power collectors.

Gravity assist might pick the speed up to 150 kilometers per second, which works out to a bit over 8000 years to Alpha Centauri. Whether such a traveling colony world would actually put colonists on a planet around the destination star is conjectural. Perhaps more likely is the idea that they would study the new solar system and then set course for another. The human species will be in the process of evolutionary forking, and after a few such journeys between the stars, the meeting between the cometary travelers and their fastship brethren would be an interesting one to see. What would these two different branches of humanity still share?

I don’t know the answer to that question, but it gets at the meaning of what it is to be human. Our future Oort Cloud dwellers will have not only an isolated gene pool but the tools of genetic engineering at their disposal, which could make biochemical and even structural changes possible at a faster clip than straightforward natural selection. If our species survives its technological adolescence — by no means a sure thing, as the Drake Equation reminds us — then humans around other stars are going to take a wide variety of forms adapted to their environments, a flowering speciation that could spread humanity out into the Orion Arm.