Brown dwarfs fascinate me because they’re the newest addition to the celestial menagerie, exotic objects about which we know all too little. The evidence suggests that brown dwarfs can form planets, but so far we’ve found only a few. Two gravitational microlensing detections on low mass stars have been reported, one of which is a 3.2 Earth-mass object orbiting a primary with mass of 0.084 that of the Sun, putting it into the territory between brown dwarfs and stars. The MEarth project has uncovered a planet 6.6 times the mass of the Earth orbiting a 0.16 solar mass star.

Now a new proposal to use the Spitzer Space Telescope to hunt for brown dwarfs planets is available on the Net, one that digs into what we’ve found so far, with reference to the discoveries I just mentioned:

Accounting for their low probabilities, such detections indicate the presence of a large, mostly untapped, population of low mass planets around very low mass stars (see also Dressing & Charbonneau (2013)). Arguably the most compelling discovery is that of the Kepler Object of Interest 961, a 0.13 [solar mass] star, orbited by a 0.7, a 0.8 and a 0.6 Rearth on periods shorter than two days (Muirhead et al. 2012). The KOI-961 system, remarkably, appears like a scaled-up version of the Jovian satellite system. This is precisely what we are looking for.

The plan is to use the Spitzer instrument to discover rocky planets orbiting nearby brown dwarfs, the idea being that the upcoming mission of the James Webb Space Telescope will need a suitable target list, and soon, for it to be put to work on probing the atmospheres of exoplanets. A 5400 hour campaign is the objective, the goal being to detect a small number of planetary systems with planets as small as Mars. Interestingly, the team is advocating a rapid release of all survey data to up the pace of exoplanet research and compile a database for further brown dwarf studies. 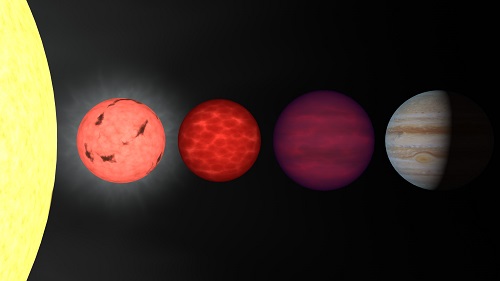 Brown dwarfs turn out to be excellent targets as we try to learn more about rocky planets around other stars. Studying the photons emitted by an atmosphere during an occultation requires relatively close targets, and as the paper on this work points out, the fainter the primary, the better the contrast between the central object and the planet. And around brown dwarfs we can expect deep transits that allow us to detect objects down to Mars size with Spitzer’s equipment. The paper also notes that brown dwarfs older than half a billion years show a near constant radius over their mass range, making it easier to estimate the size of detected planets.

Spitzer is the only facility that can survey a sufficient number of brown dwarfs, long enough, with the precision and the stability required to credibly be able to detect rocky planets down to the size of Mars, in time for JWST. We estimate that about 8 months of observations would be needed to complete the survey. Once candidates are detected, large ground-based facilities will conﬁrm the transits, ﬁnd the period (if only one event was captured by Spitzer) and check for the presence of additional companions. This program will rapidly advance the search for potentially habitable planets in the solar neighborhood and transmit to JWST a handful of characterizable rocky planet atmospheres.

This is a survey that not only probes a fascinating kind of object but one that should offer what the paper calls “the fastest and most convenient route to the detection and to the study of the atmospheres of terrestrial extrasolar planets.” It goes public at a time when 76 new brown dwarfs have been discovered by the UKIRT Infrared Deep Sky Survey, including two potentially useful ‘benchmark’ systems. The authors of the Spitzer proposal argue that observing the atmospheres of Earth-sized transiting worlds around M-Dwarfs with JWST will be much more challenging than equivalent work using brown dwarfs, assuming we get to work identifying the best targets.