Yesterday I remarked on how many more tools for exoplanet discovery we have today than were available to Harry Stine when he wrote “A Program for Star Flight” in 1973. That same day came the disheartening news that the Kepler mission has been stopped in its tracks by an equipment malfunction. But take heart — a vast amount of data already gathered by Kepler remains to be studied, meaning we’ll be getting Kepler discoveries for some time to come. The Kepler news also sharpens our focus on TESS (Transiting Exoplanet Survey Satellite), which will build our catalog of nearby stars hosting exoplanets, with launch now scheduled for 2017. 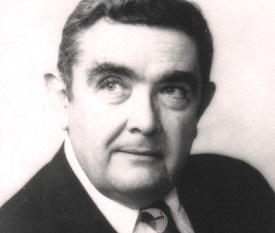 For more on Kepler, see Dennis Overbye’s Breakdown Imperils NASA’s Hunt for Other Earths. But back to Stine, who in 1973 was hunting not only for target exoplanets but also for a propulsion system that would get a human crew to them. He was evidently familiar with Eugen Sänger’s papers on photon rockets, in which the German designer proposed deflecting the gamma rays produced by the annihilation of matter with antimatter to produce thrust. But Sänger’s ideas depended on tuning the gamma ray photons into a directed beam, something that no one could figure out how to do. Stine pondered the idea but rejected it.

And although George Marx and Robert Forward had already been examining pushing a large sail with a laser (Forward’s work went back to the early 1960s), Stine seems unaware of it. In any case, he was a rocket man, and it was perhaps inevitable that it would be Project Orion that drew his attention. Nuclear pulse propulsion would detonate a fission bomb behind the vehicle to drive it forward, using enormous shock absorbers to cushion the craft. Theoretical work led by Ted Taylor showed that the principle was sound, and simple tests using chemical explosives were conducted near San Diego, but the Nuclear Test Ban Treaty ended the project in 1963.

I mentioned yesterday that Freeman Dyson, a major player in the Orion research, would go on to publish a 1968 paper that took Orion to the next level, using thermonuclear devices to drive the spacecraft. Dyson’s ultimate craft was capable of speeds of 10,000 kilometers per second, enabling a mission to Alpha Centauri with deceleration at the destination in 130 years. I imagine it was Dyson’s starship that fired the imagination of Robert Duncan-Enzmann, then at Raytheon Corporation, leading to a modified and extended Orion that Stine would use in his article.

Adam Crowl, working with Kelvin Long and Richard Obousy, has produced an excellent overview of the Enzmann design that appeared in the Journal of the British Interplanetary Society last year (reference below). What I’m doing here is looking at Stine’s use of Enzmann as reflected in his Analog article, in which he foresees fleets of Enzmann starships dispatched in a regular pattern of interstellar exploration. The Enzmann vessel is distinctive, as the illustration below shows, a long cylinder capped by a 1000-foot sphere made up of 12 million tons of frozen deuterium, the fuel for its eight Orion-style propulsion modules. 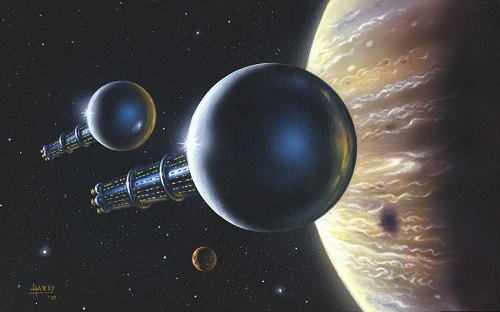 Image: The Enzmann starship as envisioned by the space artist David Hardy. This painting was commissioned by Kelvin Long in 2011 to depict a scene Hardy had first painted in the 1970s.

This was one big vessel, a cylinder 300 feet in diameter and 1000 feet long. Stine points out that a Saturn V without the Apollo escape tower would lie sideways inside this cylinder, which contains nearly a half-million cubic feet of living space. The Empire State Building, New York’s iconic symbol, would fit lengthwise easily enough with just its top tower sticking out the end. But the Enzmann vessel wasn’t, in many ways, a single ship. Stine explains:

Each drum-like module is built upon a central core 50 feet in diameter and 300 feet long. Covering this backbone are eight decks of sub-modules each measuring 10 feet by 10 feet by 23 feet. These sub-modules are used as living quarters, storerooms, laboratories, and recreational areas by the human crew. Each of the drum-like modules has 700 of the smaller sub-modules.

And so on. The Enzmann starship, during the long coasting part of its journey, would be spun-up around its longitudinal axis to provide artificial gravity for the people on board. Enzmann thought a crew of 200 would be about right, with plenty of room for growth to an optimum population of 2000, a figure that balances against the closed-cycle ecology of the ship. Preserving the balance of population around this figure leads to what Stine calls ‘fascinating problems in applied social engineering.’ Indeed. This is, in fact, perhaps the biggest unknown variable of the mission.

Because Stine thought in terms of ships traveling together, his ultimate expedition would be about the size of a small city of 20,000 or so dispersed through ten starships. Modules and sub-modules could be disassembled during cruise if necessary and attached to another ship, with all parts designed to be interchangeable. Each ‘star fleet’ would launch what Stine called ‘metaprobes’ to move ahead of the main body for advanced reconnoitering of the target.

I mentioned at the outset of this series on 1970s starship projects that among some designers, at least, it was a time of immense optimism. We saw that in Bob Forward’s aggressively ambitious plan for exploration as presented to a subcommittee of the U.S. House. We also see it in spades in Stine’s thinking, making this theme a good note on which to close. Stine believed interstellar travel was possible through the laws of known physics and that it would not involve one-way trips but continued waves of exploration with frequent return to Earth. He goes on:

For expeditions out to about eight light-years, the original crew has a very good chance of returning; with advances in geriatrics and longevity research, we may have a synergistic relationship here that would make star flight out to quite respectable distances something that could be accomplished within a single lifetime. Naturally, some people aren’t ever going to come back to Earth again, but things like that seldom stop motivated people. My own ancestors never saw their native Germany again after making a short 3,000-mile sea voyage a couple of hundred years ago; but I’ve been back several times. In fact, our intrepid interstellar explorers stand a much better chance of getting there and getting back than many terrestrial explorers up to and including Twentieth Century men.

What an era. To Stine, the 1970s in relation to starflight looked like a time that paralleled the 1930s, when the first experiments in rocketry were producing results and we were learning how to reach into the stratosphere. He thought starflight was a mere 40 or so years away, a sentiment that seems all too naïve today given the amounts of energy that would need to be produced, but one that by its fierce commitment to the future can still be inspiring. We will do well to try to keep Stine’s enthusiasm alive even as we tackle the vast propulsion challenges that confront us.

For more on the designs of Robert Duncan-Enzmann, see Crowl, Long and Obousy, “The Enzmann Starship: History & Engineering Appraisal,” JBIS Vol. 65, No. 6 (June, 2012).