For the most part, the focus of SETI since Project Ozma has been directed at intercepting signals deliberately sent our way. It doesn’t have to be so, of course, because extraneous signals from a civilization going about its business would also be profoundly interesting, and even a civilization not much more advanced than ours might be throwing off powerful evidence of its existence through the planetary radars it uses to detect potential impactors in its own system.

Whether or not the Ohio State WOW! signal was a SETI detection remains unresolved, but I always think back to the original Cocconi and Morrison paper “Searching for Interstellar Communications,” published in Nature in 1959. Neither man could know in that year whether exoplanets even existed, but it was a reasonable supposition, and technology had advanced to the point where detecting SETI signals was consistent with all we knew. And as the duo wrote: “The probability of success is difficult to estimate, but if we never search, the chance of success is zero.”

Again I’m reminded of Freeman Dyson’s dictum ‘look for what’s detectable, not for what’s probable,’ which reminds us not to bring too many assumptions into the mix. Thus today we’re seeing the growth of interest in interstellar artifacts, perhaps in the form of gigantic engineering projects that would be observable across light years. And now we have a new proposal, one that would use a gigantic telescope housed here on Earth to look for infrared signatures around other stars. These would not be beacons but the infrared excess inevitably generated by a civilization going about its business. We needn’t, in other words, wait for them to send to us.

The Largest of All Telescopes

Four researchers have outlined the prospect in How to Find ET with Infrared Light, an article appearing in the June, 2013 issue of Astronomy. Jeff Kuhn (University of Hawaii), Svetlana V. Berdyugina (University of Freiburg), David Halliday (Dynamic Structures, Ltd., in British Columbia), and Caisey Harlingten (Searchlight Observatory Network, Norwich, England) believe that a survey out to 60 light years using their methods could make a definitive call on the existence of any civilizations there. The attempt revolves around the use of power.

Consider that Earth’s current terrestrial power production is 15 terawatts, which turns out to be 0.04 percent of the total solar power received on Earth from the Sun. The authors designate the ratio of a civilization’s power production to the amount of solar power it receives as Ω. The article points out that the total power used by photosynthesis on Earth is 0.2 percent of the total light falling on the planet from the Sun — it’s interesting to see that our civilization consumes only 20 percent as much power as the biology that supports us. But let’s carry this forward:

As Earth-like civilizations evolve, they use more power. For example, in Roman times, we estimate Ω was about 1/1000 what it is today. Humans’ global power consumption is growing by about 2.5 percent per year, even though the world’s population is growing at less than half this rate. In contrast, our knowledge base (the combined total of all recorded information) doubles in just two years. As cultures advance, their information content also must grow, and the power required to manipulate this knowledge eventually dominates a civilization’s total power use.

Finding a civilization through its waste heat radiation thus appears possible, given the right equipment, and what equipment it is. Right now the three largest infrared telescopes being planned are the Giant Magellan Telescope, the Thirty Meter Telescope and the European Extremely Large Telescope. But Kuhn and his colleagues need to go bigger. They’re talking about an instrument with a primary mirror of 77 meters, fittingly called Colossus. 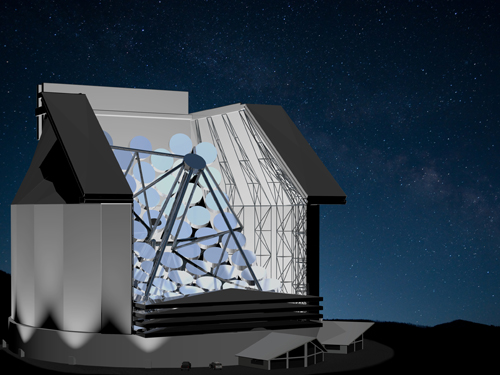 Image: The Colossus Telescope, a high-resolution, multiple-mirror giant instrument, will have the ability to directly image the heat generated by other civilizations on planets orbiting stars near us in the Milky Way. Credit: Innovative Optics/Colossus Corporation.

A huge collecting area and an adaptive optics system to correct for the effects of Earth’s atmosphere are essential, as are techniques of ‘thin-mirror slumping’ and polishing technologies being developed by the team through their company Innovative Optics, which operates its research and development out of the University of Hawaii’s Institute for Astronomy in Maui as well as at the National University of Mexico in Ensenada. I pulled this from the Innovative Optics website in a section describing the team’s methodology:

Our proprietary processes drastically reduce the time and cost of production of precision optics. Our optics are produced by fire polishing flat glass (which avoids time-consuming abrasion techniques and leaves a smoother, optically-superior mirror surface), then “slumping” the hot glass under controlled conditions to the desired final shape; no grinding or rough polishing step is required.

The site goes on to describe what it calls ‘Live Mirror’ technologies that provide the adaptive optics needed to eliminate atmospheric distortion. Innovative Optics claims its mirrors can be very thin (2.5 cm thick for an 8-meter diameter Live Mirror) and therefore lightweight, at roughly 70 kg per square meter of surface area, a significant reduction over conventional mirrors. Colossus is envisioned as comprising approximately sixty of these 8-meter mirror segments, with a field of view that would take in only a few arcseconds of the sky at any time, allowing the designers to optimize for star-like sources even as the design holds down costs.

Using a sensitive coronagraph to remove scattered light that would obscure an exoplanet, Colossus would be able to find hundreds of Earth-sized or larger planets in the habitable zone including any civilizations on their surfaces. Innovative Optics is working with Dynamic Structures (Vancouver, BC) on design and construction issues, although issues of funding and location remain to be resolved. Backed by ‘a group of physicists, engineers, telescope builders, philanthropists, and businessmen,’ the team believes the technology exists to make Colossus a reality. “The Colossus would give us insight into whether civilization is a fragile development or if it is common,” the article concludes. “And we’d learn this without announcing ourselves.”