Tracking spacecraft from Earth is an increasingly cumbersome issue as we continue to add new vehicles into the mix. The Deep Space Network can track a Voyager at the edge of the Solar System, but using round-trip times and the Doppler shift of the signal is a less than optimal solution for accurate tracking. What we’d like is a method that would allow the spacecraft to calculate its position on its own, taking precise readings from some system of celestial markers.

Pulsars have been in the mix in this thinking for some time. After all, these remnants of stars rotate at high speed and put out radiation beams that blink on and off at regular intervals. They’ve been called ‘celestial lighthouses’ because of this effect, and they’re usefully consistent, producing their pulses in intervals that vary from milliseconds to seconds. The easiest analogy is with the global positioning system, and in this recent article in IEEE Spectrum (thanks to Frank Smith for the pointer), that’s exactly how their use is described:

A craft heading into space would carry a detector that, similarly to a GPS receiver, would accept X-rays from multiple pulsars and use them to resolve its location. These detectors—called XNAV receivers—would sense X-ray photons in the pulsars’ sweeping light. For each of four or more pulsars, the receiver would collect multiple X-ray photons and build a “light curve.” The peak in each light curve would be tagged with a precise time. The timing of these peaks with respect to one another would change as you traveled through the solar system, drawing nearer to the source of some and farther from others. From this pattern of peaks, the spacecraft could calculate its position. 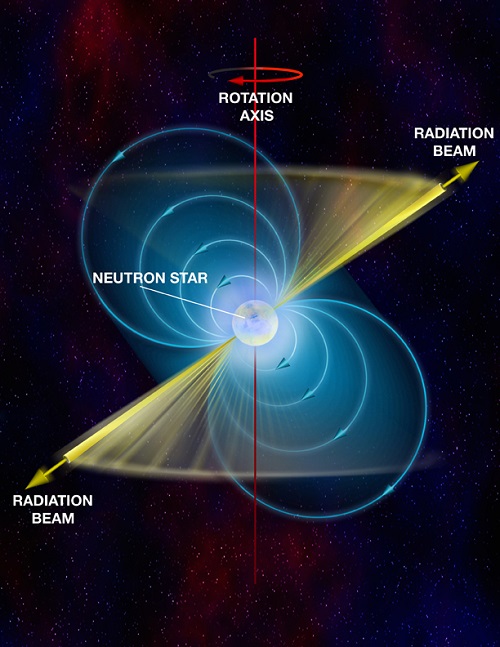 Image: The magnetic poles on a neutron star act like fountains, an escape valve for charged particles that get trapped in the star’s enormously strong magnetic field. As a neutron star spins, its polar fountains turn with it, like an interstellar lighthouse beam. From Earth, we see the beam as it quickly sweeps past us — there, gone, there, gone — many times a second. That looks like a pulse from here. Hence the name, “pulsar.” Credit: National Radio Astronomy Observatory.

Pushing the pulsar navigation idea forward is a table-top device known at NASA Goddard as the Goddard X-ray Navigation Laboratory Testbed (GXNLT), which has been developed to test out a navigation experiment that will be flown on the International Space Station as early as 2017. The ‘pulsar-on-a-table’ can mimic pulsar spin rates and model pulsar locations in the sky, simulating the environment that the upcoming ISS experiment will encounter. The X-ray photons it produces are detected and their arrival times processed by algorithms to extract orbital position.

These technologies are being validated for the Neutron-star Interior Composition Explorer/Station Explorer for X-ray Timing and Navigation Technology mission (NICER/SEXTANT), which will, in addition to demonstrating navigation by pulsars, study the interior composition of neutron stars (for more on NICER/SEXTANT, see this GSFC news release). The assumption is that like the 26-satellite GPS system, pulsar navigation will be able to use onboard software to calculate a position, but without the obvious, Earth-centric limitations of GPS signals.

Luke Winternitz, a co-developer of the Goddard testbed, thinks navigating with X-rays can open up deep space for autonomous navigation, and the test equipment is a vital step in shaking out the system:

“X-ray navigation has the potential to become an enabling technology for very deep space exploration and an important augmentation to NASA’s Deep Space Network. We had to have a way to test the technology. We have GPS constellation simulators that make our GPS receivers think they are in orbit; we needed something analogous for an XNAV receiver.”

So far the ground tests using the pulsar-on-a-table show that the system will be accurate within one kilometer in low-Earth orbit, but the goal is to reach accuracies in the hundreds of meters even in deep space. By the time we do get NICER/SEXTANT into place on the International Space Station, we should have a high degree of confidence that the system will work. Ultimately, basing navigation within the Solar System and beyond on Earth-based equipment will give way to autonomous navigation, a necessity for accuracy as well as practicality as we push outward.