Catching Up with FOCAL

Michael Chorost has written a fine essay on Claudio Maccone’s FOCAL mission concept for The New Yorker blog. Centauri Dreams regulars will know Chorost from several previous posts here, particularly a discussion on SETI that I talked about in On Cosmic Isolation, where he analyzed the hunt for extraterrestrial civilizations in terms of problems of perception, with reference to his own thoughts on deafness, cochlear implants and neurotechnology. Mike is the author of the superb World Wide Mind (Free Press, 2011) that examines the interface between future humans and future machines.

I also like to remind readers of something Mike wrote on his own blog last year, which refers to a book I deeply admire and issues I’ll be writing about in future essays here. In particular, how do we deal with advanced alien civilizations if we run across them, and would the gap between us and them defeat our attempts at communication? Chorost takes a positive view:

I’d like to be optimistic. I’d like to think we’d be better off than preliterates puzzling over Wikipedia on an iPad. In his book The Beginning of Infinity, David Deutsch argues that humans crossed a crucial threshold with the scientific method. We now know that everything is explainable in principle, if we make the effort to understand it. Arthur C. Clarke famously said that any sufficiently advanced technology will seem like magic. This may be true, but we will not mistake it for magic. We have a postmodern openness to difference, a future-oriented culture, and well-established methodologies for studying the unknown. Our relative horizons are much larger than our ancient ancestors’ were.

More on all these issues in last year’s post SETI: Contact and Enigma. For today, though, some thoughts about the FOCAL mission, which envisions sending a probe out past 550 AU, the distance at which light is bent around the Sun by its gravity to form a gravitational lens. I say ‘beyond 550 AU’ because the focal line goes to infinity, and also because at 550 AU itself, we have severe coronal distortion effects to deal with, so a FOCAL mission, if the technology and the science check out to make it happen, would begin its observations further out and would keep traveling as it made them.

We’ve seen recently –and Chorost writes about this — that there is to be an attempt to examine Proxima Centauri for planets because of an upcoming gravitational lensing event. The star will pass in front of a far more distant star in October of 2014, and an analysis of that event may flag the presence of small planets that have thus far eluded detection. Maccone, of course, has been arguing since the early 1990s that we can stop waiting for chance observational occurrences and start exploiting the gravitational focus with a directed mission. His book Deep Space Flight and Communications (Springer, 2010) is an analysis of mission possibilities.

My conversations with Claudio Maccone about FOCAL go back to one of Ed Belbruno’s New Trends in Astrodynamics and Applications conferences at Princeton in 2005, where Greg Matloff, his wife C and I had breakfast with Claudio and, over orange juice, coffee and a stack of enormous pancakes, talked about the problems and potential solutions for getting the mission to work. Since then the indefatigable Maccone has worked tirelessly on the issues and in his new book discusses, among other things, the kind of antenna deployment such a probe would use, and the prospects for using gravitational lensing not only for astronomical observations but communications.

Chorost had numerous exchanges with Maccone for this piece and does an admirable job at making the basics clear to a lay audience. He’s particularly interested in SETI possibilities, something out of which the initial FOCAL work grew through meetings in Italy in the 1990s that examined the kind of missions that could be run using solar sail technologies. From the essay:

Maccone wants to use the sun as a gravitational lens to make an extraordinarily sensitive radio telescope. He did not invent the idea, which he calls FOCAL, but he has studied it more deeply than anyone else. A radio telescope at a gravitational focal point of the sun would be incredibly sensitive. (Unlike an optical lens, a gravitational lens actually has many focal points that lie along a straight line, called a focal line; imagine a line running through an observer, the center of the lens, and the target.) For one particular frequency that has been proposed as a channel for interstellar communication, a telescope would amplify the signal by a factor of 1.3 quadrillion.

Could we actually build such a craft and, having sent it on its journey to a place roughly five times as far as Voyager 1 has reached to begin observations, untangle the information it sent us? We’re pushing theory and technology hard and have much to do with both before we can be sure it will work. For that matter, when Mike asked me how we could get Maccone’s payload into this kind of trajectory within the lifetime of a human researcher, I had to say that with present-day methods, we’d be limited to a solar sail (perhaps with a close solar pass to boost acceleration) or nuclear-electric technologies that might be used in conjunction with such a sail. 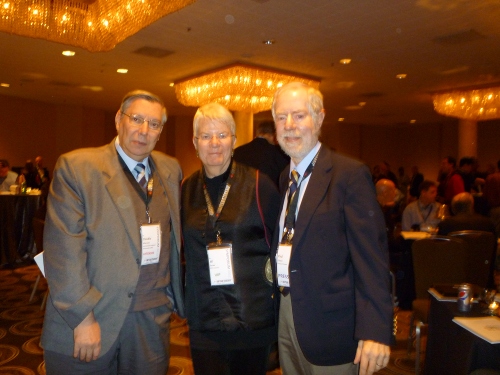 Image: Claudio Maccone (left), Jill Tarter and myself at the 100 Year Starship conference last year in Houston. What an evening that was, and yes, FOCAL was a major topic when Claudio and I had dinner the next evening. Thanks to Thomas Hair for snapping this.

But then what? Long-time readers will know of my admiration for A. E. van Vogt’s short stories (his novels, alas, are another matter, although I have a lingering fondness for The Weapon Shops of Isher). In particular, the story “Far Centaurus,” which ran in the January, 1944 issue of Astounding, sticks with me because its Centauri-bound crew finds the destination already settled by people who had left long after them on faster ships. So if a 50-year FOCAL mission is enabled by sail or hybrid technologies, can we guarantee that twenty years after launch, we won’t have something better — a fusion option, perhaps — that will pass the initial mission along the way?

It’s always a tradeoff, and the fact is that we could have waited before sending our Voyagers to the edge of the Solar System. If we had, we’d still be waiting, because it’s proving mighty hard to come up with that next big propulsion breakthrough due to funding limitations and perceived lack of public enthusiasm for major space projects. New Horizons is arcing toward Pluto/Charon and at one point was moving a bit faster than Voyager 1, but the Sun’s gravity has slowed it back down, leaving the intrepid Voyager 1 at 17.1 kilometers per second as our fastest moving object.

Or, I should say, ‘our fastest moving object that is departing the Solar System,’ since we’ve been able to get solar probes like Helios up to faster speeds. In any case, FOCAL is one of those mission concepts that, like Innovative Interstellar Explorer, demand innovative thinking and a serious gut-check in terms of what is possible and what we want to do. For me, the scope of the challenge makes it all the more fascinating to study such missions. Pushing hard at our limits awakens creative thought and suggests unexpected options in a future that is anything but foreordained.

Next post: Starship Century: A Review of the Book