Red dwarf stars of the sort we discussed yesterday are all over the galaxy, comprising perhaps as much as 80 percent of the stellar population. Brown dwarfs are different. Data from the Wide-Field Infrared Survey Explorer mission (WISE) indicate that these ‘failed’ stars — brown dwarfs are too small to sustain hydrogen fusion — exist in smaller than expected numbers, at least in our stellar neighborhood. WISE could find but one brown dwarf for every six stars (see Brown Dwarfs Sparser than Expected for more on the WISE findings). 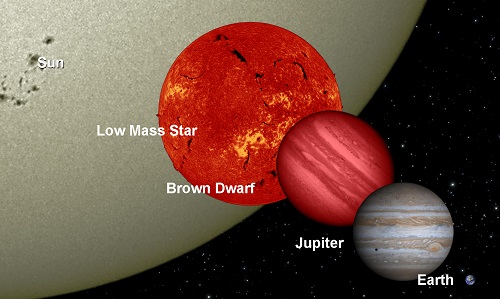 As we learn more about the brown dwarf population, we can keep in mind the tantalizing fact that several of these objects have been found with disks of material around them, leading to the speculation that they can form planets in the same way that normal stars can. It’s true that several objects have already been found associated with brown dwarfs, but they tend to be large enough in relation to the dwarf that they could almost be considered part of binary systems. Add to that the fact that dwarfs like 2MASS 1207-3932 are widely separated from their companion (45 AU in the case of 2MASS 1207-3932 and 15 AU for the dwarf 2MASS 0441-2301).

Whatever we call the objects around these two brown dwarfs, they seem unlikely to have formed out of protoplanetary disk material, says a draft version of a new paper on a brown dwarf planetary discovery by the gravitational microlensing team called OGLE (Optical Gravitational Lensing Experiment). The new planet — OGLE-2012-BLG-0358Lb — is different. It’s lower in mass compared to its brown dwarf primary than the other brown dwarf planetary finds, about 1.9 Jupiter masses as compared with the brown dwarf’s mass of 0.022 that of the Sun, making the dwarf about ten times larger than the companion. The presumed planet is also comparatively close in at 0.87 AU.

The discovery paper suggests that these differences point to the companion forming, like a conventional planet, from the protoplanetary disk around the brown dwarf, although it hedges its bets on just how that formation occurred:

Surveys for disks around young BD have found some systems with inferred disk masses up to and even slightly exceeding ∼ MJ…, although these are relatively rare and the inferred masses are subject to considerably uncertainty. Such massive disks are likely to be near the limit of stability…, arguing for a gravitational instability formation scenario rather than core accretion. On the other hand, the relatively close separation may pose a challenge for gravitational instability. Clearly, additional theoretical work is needed to explore the viability of planet formation in BD protoplanetary disks, either by the gravitational instability or core accretion mechanism. For this, it is essential to ﬁnd more binaries with BD hosts in wide ranges of mass ratios and separations.

Microlensing seems well adapted to this task with its ability to detect planets around extremely faint, low mass stars. The light of a background star is here bent around the gravitational well caused by the gravity of an intervening object, in this case a brown dwarf. Analysis of the light curve brings out the existence of the accompanying planet. Teams using these methods are homing in on other brown dwarf systems looking to learn more about planet formation, work that will tell us how planets form here and how common we can expect them to be.

Let me also point you to an interesting paper by Matthew Route and Alex Wolszczan (both with Penn State affiliations). It’s “The Arecibo Detection of the Coolest Radio-Flaring Brown Dwarf,” in Astrophysical Journal Letters Vol. 747, No. 2, L22 (abstract). These researchers are reporting on the detection of naturally emitted radio waves and the discovery of the magnetic field strength of the coolest planet-sized object outside our own Solar System. The radio waves are not unexpected — Jupiter and Saturn also produce radio waves via what’s known as Electron Cyclotron Maser Instability (ECMI) — but this discovery involves emissions from a brown dwarf.

Matthew Route has a fine explanation of this work online. The brown dwarf is 2MASS J10475385+212434, a T6 dwarf with a spectrum showing water, methane and hydrogen, and a temperature of about 900 K. The magnetic field strength is measured at 3000 times that of the Earth, and 100 times the strength of Jupiter’s magnetic field at its poles.

Ultimately we’d like to measure natural radio emissions not just from brown dwarfs but from exoplanets, a quest explained by Route:

1. They give us insight as to the strength of magnetic fields on other planets, which is something completely new and unstudied for exoplanets.
2. They tell us something about the internal processes near the cores of the exoplanets.
3. Exoplanet rotation rates could be determined this way.
4. The presence of moons around various exoplanets could be inferred from how they interact with and cause emission from the exoplanet’s magnetic field.
5. The magnetic fields that give rise to them are probably necessary for life.

That last item catches the eye, of course, and it’s a nod to the fact that a strong magnetic field helps to protect life on Earth from bombardment by charged particles. Two other things come to mind here, the first being the work of Jonathan Nichols (University of Leicester) on detecting auroral emissions from exoplanets and the possibility of using instruments like the Low Frequency Array for such studies. The other item is Heikki Vanhamaki’s work at the Finnish Meteorological Institute in Helsinki. Vanhamaki has suggested using natural radio emissions to detect solitary ‘rogue’ planets wandering between the stars.

The brown dwarf findings by by Route and Wolszczan are an impressive step in the direction of tuning these methods for exoplanets around brown dwarfs and elsewhere. I’m roaming widely on the brown dwarf topic this morning, and that should be an indicator not only of my fascination with these objects but with the fact that they and their potential planets are an increasingly significant area of research.