‘Graveyard Comets’ in the Asteroid Belt

When we study extrasolar planetary systems, we’re seeing stars and planets in a wide variety of ages and configurations, helpful in making sense out of our own system’s past. New work out of the University of Antioquia (Medellin, Colombia) suggests changes to the main belt of asteroids between Mars and Jupiter of a kind that we may one day be able to spot in the disks around stars younger than the Sun. What Ignacio Ferrin and team have found is that the main belt, already known to house more than a million objects from one meter to 950 kilometers in size, is also what their paper calls “an enormous graveyard of ancient dormant and extinct rocky comets.”

That conclusion emerges from a study of main belt asteroids recently discovered to have cometary characteristics (the paper calls these ‘asteroidal belt comets’, or ABCs). These objects sublimate ices and otherwise behave like comets even though their orbits are entirely asteroidal. The researchers believe that what we are seeing is not rocky asteroids but dormant comets whose remaining ices are hidden deep within the nucleus. Their recent activity is accounted for by slight changes in temperature whose causal agent is disruption by the gravity of Jupiter, which changes the shape of their orbits to bring them slightly closer to the Sun. Says Ferrin:

“These objects are the ‘Lazarus comets’, returning to life after being dormant for thousands or even millions of years. Potentially any one of the many thousands of their quiet neighbours could do the same thing.” 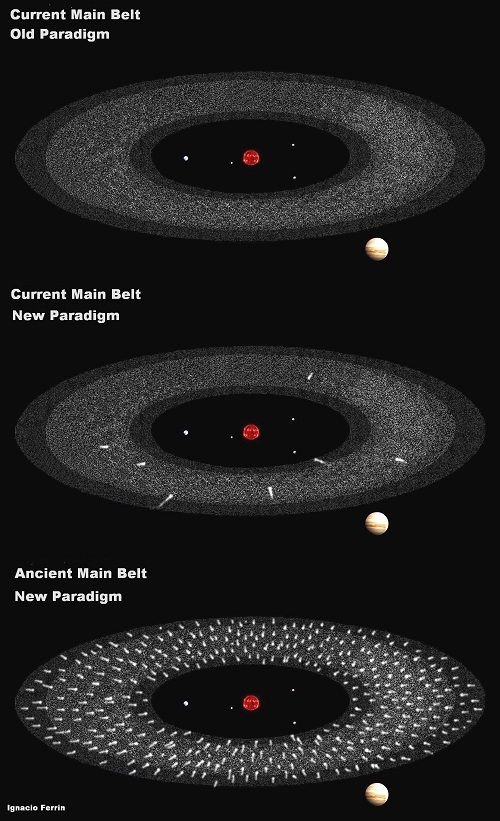 Image: These illustrations show the asteroid belt in the present day and in the early Solar System, located between the Sun (at center) and four terrestrial planets (near the Sun) and Jupiter (at bottom left). The top image shows the conventional model for the asteroid belt; largely composed of rocky material. The middle image shows the proposed model, with a small number of active comets and a dormant cometary population. The lower diagram shows how the asteroid belt might have looked in the early Solar System, with vigorous cometary activity. Credit: Ignacio Ferrin / University of Antioquia.

A decrease in perihelion distance brings changes in the amount of received energy. A truly extinct comet is one in which all the ices have already sublimated, which can happen to comets with radii in the range of 50 to 150 meters. But a larger nucleus can withstand sublimation up to a certain depth and then become dormant until it encounters an additional source of energy. Orbital changes can account for the difference. From the paper:

If the perihelion distance increases, the thermal wave would penetrate less, would not reach to the deep layer of ices, and the comet would become more dormant. On the other hand, if the perihelion distance were to decrease, the thermal wave would be more intense and would penetrate deeper reaching to the ice layer, thus awakening and rejuvenating the comet. A new round of activity would ensue. Perihelion distances of comets change randomly due to planetary perturbations especially at resonances. An example of this is the comet P/2008 R1 Garradd located very near the 8:3 resonance with Jupiter…

The paper argues that asteroid belt comets have had perihelion decreases in recent times, and presents evidence that most such objects resume activity at or after perihelion, a sharp contrast with normal comets that become active well before their closest approach to the Sun. The asteroid belt of the past, then, may have been littered by thousands of active comets, whose activity subsided as the objects aged. This work presents an alternative to theories that collisions in the asteroid belt or solar wind activity are the cause of ancient comets becoming active again.

The paper is Ferrin et al., “The location of Asteroidal Belt Comets (ABCs) in a comets’ evolutionary diagram: The Lazarus Comets,” in press at Monthly Notices of the Royal Astronomical Society (full text).