Comet Impacts and the Origin of Life

It was back in 2010 that Nir Goldman (Lawrence Livermore National Laboratory) first predicted that the impact of a comet on the early Earth could produce potential life-building compounds like amino acids. Goldman was using computer simulations to make the call, studying molecular dynamics under the conditions of such impacts. He found that the shock of impact itself should produce amino acids and other prebiotic compounds, regardless of conditions on the planet. It was intriguing work because it suggested that impacts in the outer system (think Enceladus, for example) could produce enough energy to create the shock synthesis of prebiotics there.

Now Goldman, working with collaborators from Imperial College London and the University of Kent, has gone beyond the simulations to test the process in the laboratory. By firing a projectile into a mixture comparable to the material found on a comet — water, ammonia, methanol and carbon dioxide — the team was able to produce several different kinds of amino acids including D- and L-alanine and the non-protein amino acids α-aminoisobutyric acid and isovaline as well as their precursors. The high-speed gun, located at the University of Kent, propels steel projectiles at 7.15 kilometers per second into the target mixture. Says Goldman:

“These results confirm our earlier predictions of impact synthesis of prebiotic material, where the impact itself can yield life-building compounds. Our work provides a realistic additional synthetic production pathway for the components of proteins in our Solar System, expanding the inventory of locations where life could potentially originate.”

Planetary impacts from comets were surely widespread in the early Solar System, and we now know that they could produce prebiotic molecules and thus play a role in the development of life. What Goldman’s team has demonstrated is that the shock of impact itself is enough to produce the energy needed for the synthesis of complex organic compounds from the comet’s ices. It is possible that this process began life’s course on Earth during the Late Heavy Bombardment, the era between 4.1 and 3.8 billion years ago when collisions were rife in the inner system. 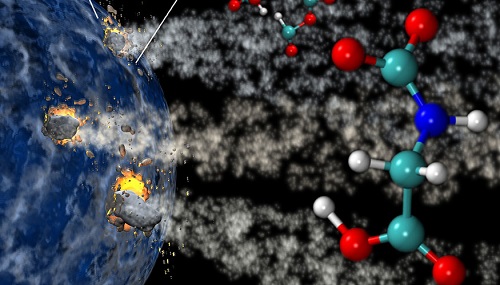 Image: Comets contain compounds such as water, ammonia, methanol and carbon dioxide that could have supplied the raw materials that, upon impact with the early Earth, would have yielded an abundant supply of energy to produce amino acids and jump-start life. Credit: Lawrence Livermore National Laboratory.

The same building blocks can be produced by the impact of a rocky meteorite into an object with an icy surface, making the icy moons of outer gas giants an interesting environment for astrobiology. Mark Price (Imperial College London) notes how much still needs to be understood:

“This process demonstrates a very simple mechanism whereby we can go from a mix of simple molecules, such as water and carbon-dioxide ice, to a more complicated molecule, such as an amino acid. This is the first step towards life. The next step is to work out how to go from an amino acid to even more complex molecules such as proteins.”