Considering how much data it has accumulated, the Kepler mission will continue to serve us even if its ongoing operations have ceased. We’re now seeing some of its data used in conjunction with observatories like the Spitzer space telescope to tease out further information. Combine the two and we can examine distant worlds at multiple wavelengths, leading Paul Hertz, director of NASA’s Astrophysics Division, to say “We’re at a point now in exoplanet science where we are moving beyond just detecting exoplanets, and into the exciting science of understanding them.”

Exciting indeed, for what this multi-wavelength look has now provided is a low-resolution view of the clouds on one of Kepler’s earliest finds, the ‘hot Jupiter’ known as Kepler-7b. Spitzer has already proven its capabilities by producing temperature maps of exoplanets, but this is the first time we’ve been able to map cloud structures. The visible light Kepler observations had revealed a bright spot on the planet’s western hemisphere, but it took Spitzer’s infrared studies to show that astronomers were seeing light from the star bouncing off cloud tops rather than heat. 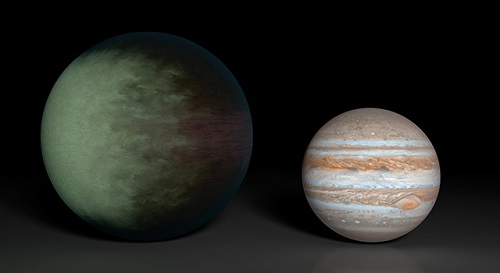 Image: Kepler-7b, shown in the artist’s conception at left, is the first exoplanet to have its clouds mapped, thanks to data from NASA’s Kepler and Spitzer space telescopes. The alien planet is 1.5 times as wide as Jupiter, which is shown at right for comparison. Credit: NASA/JPL-Caltech.

The planet itself is a relatively low mass ‘hot Jupiter’ orbiting its star in 4.89 days, with a radius large enough to indicate an extremely low density — in fact, this JPL news release describes the world as one of the puffiest planets known, light enough to float if somehow placed in water. Working with its albedo (average reflectivity) is tricky because distinguishing between reflected light and thermal emission is complicated by the heavy irradiation the planet receives from its star. But temperature readings in the range of 1100 to 1300 Kelvin are not hot enough to explain what Kepler had observed by studying the planet’s phases in visible light.

The asymmetry that Brice-Olivier Demory (Massachusetts Institute of Technology) and team are seeing in Kepler-7b’s light shows a structure that does not follow the temperature profiles of tidally-locked gas giants that have been observed before. There we would expect an eastward shift (east and west are measured from the substellar point of this tidally locked world, directly facing the star). The paper on this work explains the result (internal references omitted):

And this is where Spitzer comes in:

As we do not detect thermal ﬂux from Kepler-7b with Spitzer, the most likely conclusion is that the westward shift in the visible phase-curve is indicative of a variation in the cloud properties (cloud coverage, optical depth, particle size distribution, vertical extent, composition, etc.) as a function of longitude, governed by the planet’s wind and thermal patterns.

In other words, clear skies in the east, with high clouds in the west. And that picture should last. Few giant planets reflect as much light as Kepler-7b, and the paper makes the case that this is the result of stable clouds in the upper atmosphere. The tidally-locked world shows a climate that changes little over time, with cloud patterns remaining more or less constant. Although this ‘map’ of the planet’s cloud cover is extremely low-resolution, it marks a useful step as we continue to study the atmospheres of exoplanets, with the goal of applying such techniques to ever smaller worlds once we have the needed resources to work on planets more like Earth.

The paper is Demory et al., “Inference of Inhomogeneous Clouds in an Exoplanet Atmosphere,” accepted by the Astrophysical Journal and available online as a preprint.