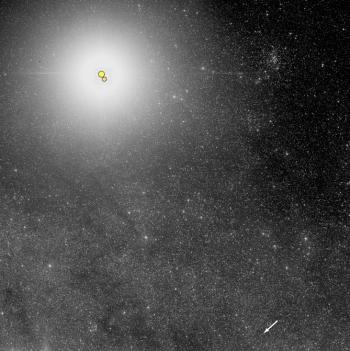 I haven’t yet read Stephen Baxter’s new novel Proxima, but because of my admiration for his previous books, it’s at the top of my reading list. Judging from the Amazon description, Proxima gets into issues that for me make red dwarfs utterly compelling. What would a habitable planet look like around such a star, tidally locked so that its sun never moved in the sky? What would it be like to move around this world, going from a warm substellar point toward twilight and then a frigid night on the dark side?

Given that this M-class red dwarf is 18,000 times fainter than the Sun, you wouldn’t expect it to make much of an impression in photographs. The one above (credit: European Southern Observatory) is instructive because it puts the entire Alpha Centauri system in context. At top left we have Centauri A and B, which are bright enough to merge together and appear as a single bright object. At the lower right is the arrow indicating Proxima Centauri, so faint as to be barely visible. Proxima is 4.218 light years from Earth and roughly 15,000 AU from Centauri A and B.

The image below gives us a brighter look. Taken by the Hubble Space Telescope, it isolates Proxima from the other two stars, but even here the red dwarf is a point-like object whose image is distorted by diffraction spikes produced within the telescope itself. 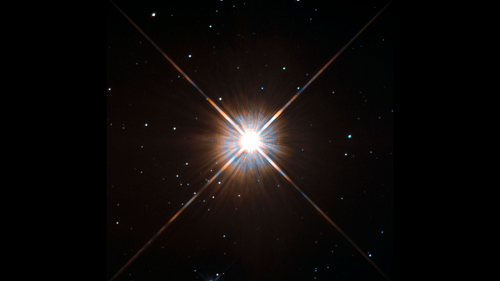 Proxima should remain a main sequence star for another four trillion years, about 300 times the current age of the universe. The planet search here is inconclusive, but here’s what we’ve got so far: Work by Michael Endl (UT-Austin) and Martin Kürster (Max-Planck-Institut für Astronomie), using seven years of high precision radial velocity data from the UVES spectrograph at the European Southern Observatory, can identify no planet of Neptune mass or above out to about 1 AU from the star. No super-Earths larger than 8.5 Earth masses have been detected in orbits of less than 100 days.

As for the habitable zone where liquid water could exist on the surface of a planet, it is thought to be between 0.022 and 0.054 AU, which would produce orbits between 3.6 and 13.8 days. The Proxima investigations have yet to find anything here, but the most we can say is that super-Earths of 2-3 times the mass of the Earth in circular orbits have been ruled out. That still leaves a lot of possibilities to be investigated as we refine our techniques and apply them to this intriguing star. Radial velocity capability down to one Earth mass is getting closer here.

Image: Comparative sizes of the Alpha Centauri stars, with the Sun thrown in for comparison. Credit: Wikimedia Commons.

Because Proxima is a flare star that can experience sudden changes in brightness, any life evolving on a planet around it would have to have found a way to protect itself from such radiation. Even so, the star’s nearness to the Sun has made it a staple in science fiction, from Murrray Leinster’s 1935 story “Proxima Centauri”, published in Astounding Stories through Heinlein’s Orphans of the Sky (1963), where it was the logical destination for a starship, to the new Stephen Baxter novel. I’ll have more to say about the latter in upcoming posts. A search through the archives here will pull numerous articles on Proxima, including The Proxima Centauri Planet Hunt and Proxima Centauri: Looking at the Nearest Star.