Piecing Together the Chelyabinsk Event

We’re still trying to learn how frequently asteroid events like the spectacular fireball over Chelyabinsk occur. The Chelyabinsk object was the largest to fall to Earth since the Tunguska explosion in 1908, which leveled thousands of acres of forest in Siberia. This BBC story discusses Peter Brown (University of Western Ontario) and colleagues’ recent paper in Nature and goes on to quote Brown as saying that a few days’ to a week’s warning would have been valuable so that we would have been prepared for what happened near the Siberian city. True enough, but what’s significant here is that the Brown team studied 20 years of data from sensors positioned around the world to estimate the frequency of such events.

The upshot: About sixty asteroids up to 20 meters in size entered Earth’s atmosphere during this period, a significantly higher number than was previously assumed. Brown’s team reports we’ve been underestimating the strike rate of asteroids between 10 and 20 meters in size by between two and ten times. That would make a Tunguska-class impact likely every few hundred years rather than every few thousand. As for the most recent event, Brown says this:

“Something like Chelyabinsk, you would only expect every 150 years on the basis of the telescopic information. But when you look at our data and extrapolate from that, we see that these things seem to be happening every 30 years or so.” 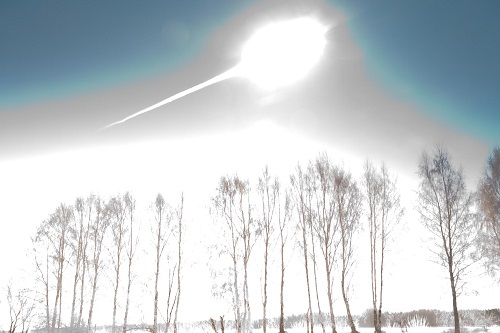 Image: The flash above Chelyabinsk, Russia, from the fireball streaking through the sky on Feb. 15, 2013. The picture was taken by a local, M. Ahmetvaleev. Credit: Copyright M. Ahmetvaleev.

Meanwhile, a new paper in Science gives us more information about the Chelyabinsk object itself. In sharp distinction to what happened in Tunguska in 1908, the Chelyabinsk incident was well reported and photographed, allowing teams under Peter Jenniskens (NASA Ames) and Olga Popova (Russian Academy of Sciences, Moscow) to follow up the story with first-hand accounts from witnesses and to study numerous videos that captured the event, helping them to reconstruct the asteroid’s properties and trajectory.

We learn the following: The impact speed of the meteor, as determined by calibrating video images, was roughly 19 kilometers per second. The object’s passage into the atmosphere caused it to fragment into pieces about 30 kilometers above the surface, at which point its light appeared brighter than the Sun even for people as far as 100 kilometers away. Between 4000 and 6000 kilograms of material fell to the ground, with much of the debris being vaporized. One 650 kilogram fragment was recovered from Lake Chebarkul on October 16, 2013. A 3.4 kilogram rock fell near the town of Timiryazevskiy and another chunk hit a house in Deputatskiy.

Image: A photograph of the meteor streaking through the sky above Chelyabinsk. Credit: Copyright M. Ahmetvaleev.

Evidently shock fractures in the rock, produced by an impact that may have occurred over four billion years ago, helped cause its breakup in the upper atmosphere. This NASA news release quotes Mike Zolensky (NASA JSC) on the small iron grains found just inside the veins as a contributing factor. “There are cases where impact melt increases a meteorite’s mechanical strength, but Chelyabinsk was weakened by it,” said Zolensky. In further Chelyabinsk investigations, Jiri Borovička (Academy of Sciences of the Czech Republic) and colleagues report in a second paper in Nature that the Chelyabinsk object may well be a fragment from asteroid 86039, a two-kilometer object whose orbit is strikingly similar.

Next post: What a Strange Asteroid Can Tell Us