What a Strange Asteroid Can Tell Us

The Pan-STARRS survey telescope in Hawaii has reminded us how much we still have to learn about asteroids. We saw yesterday that the Chelyabinsk impactor could be studied through physical evidence as well as the ample photographic records made by witnesses on the ground. But P/2013 P5, discovered by Pan-STARRS and then the object of Hubble scrutiny, is in the main belt between Mars and Jupiter, and rather than appearing as a mere point source, the object shows six comet-like tails that have confounded all those who have looked at it.

“It’s hard to believe we’re looking at an asteroid,” said lead investigator David Jewitt, a professor in the UCLA Department of Earth and Space Sciences and the UCLA Department of Physics and Astronomy. “We were dumbfounded when we saw it. Amazingly, its tail structures change dramatically in just 13 days as it belches out dust.” 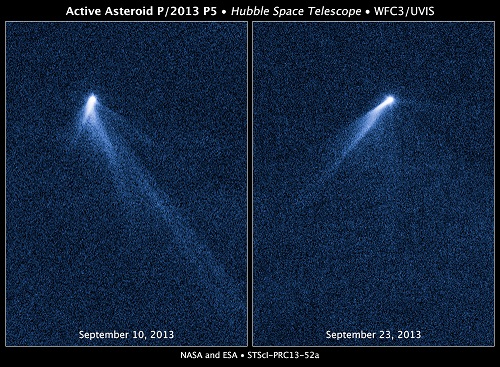 Image: This NASA Hubble Space Telescope set of images reveals a never-before-seen set of six comet-like tails radiating from a body in the asteroid belt, designated P/2013 P5. The asteroid was discovered as an unusually fuzzy-looking object with the Panoramic Survey Telescope and Rapid Response System (Pan-STARRS) survey telescope in Hawaii. The multiple tails were discovered in Hubble images taken on Sept. 10, 2013. When Hubble returned to the asteroid on Sept. 23, the asteroid’s appearance had totally changed. It looked as if the entire structure had swung around. Credit: NASA, ESA, and D. Jewitt (UCLA).

What could cause an object to resemble, as this UCLA news release notes, a rotating lawn sprinkler? Jewitt’s team, which has published its findings in the Nov. 7 issue of the Astrophysical Journal Letters, rules out an impact scenario because that would have caused a sudden release of a large amount of material. The paper notes that the six dust tails have been observed for five months and show no fading over that period.

What’s left? Sublimation of near-surface ice and electrostatic levitation of dust are among the possibilities the paper examines. The most likely solution, though, is an eruptive dust ejection scenario that could have resulted from a high spin rate. The spin could be accounted for by the pressure of sunlight exerting a torque on the 215-meter object. From the preprint:

The surviving hypothesis is that P5 is a body showing rotational mass-shedding, presumably from torques imposed by solar radiation… Rotational re-shaping and breakup under radiation torques are two of the most interesting subjects in asteroid science… Unfortunately, the expected observational signature of a rotationally disrupting body has yet to be quantitatively modeled, making a comparison with P5 difficult. This is, in part, because the appearance is likely to be dominated by small particles that carry most of the cross-section of ejected material while most of the mass resides in large particles which precipitate the instability.

The weak gravity of the asteroid, in other words, could be simply insufficient to hold the rapidly rotating object together, its dust drifting into space to form the tail-like structures we see. Interestingly, the orbit of P5 near the inner edge of the asteroid belt associates it with the Flora family of asteroids, evident collision fragments that follow similar orbits. One recent paper has noted that the spins of other members of this group show evidence for the same kind of radiation torque that P5 exhibits. Ahead for astronomers is follow-up work to learn whether dust leaves the asteroid in its equatorial plane, which would be strong evidence for rotational breakup.

And maybe, as David Jewitt suggests, we’re looking at the main way that small asteroids die. “In astronomy, where you find one, you eventually find a whole bunch more. This is just an amazing object to us, and almost certainly the first of many more to come.”