Brown Dwarfs at the Boundary

We spend a lot of time probing the borderlines of astronomy, wondering what the boundaries are between a large gas giant and a brown dwarf, for example. The other end of that question is also intriguing: When does a true star get small enough to be a brown dwarf? For main sequence stars don’t operate the same way brown dwarfs do. Add hydrogen to a main sequence star and its radius increases. But brown dwarfs work the opposite way, with additional mass causing them to shrink. We see this beginning to happen at the high end of the brown dwarf mass range, somewhere between 60 and 90 Jupiter masses.

Electron degeneracy pressure, which occurs when electrons are compressed into a very small volume, is at play here. No two electrons with the same spin can occupy the same energy state in the same volume — this is the Pauli exclusion principle. When the lowest energy level is filled, added electrons are forced into higher energy states and travel at faster speeds, creating pressure. We see this in other kinds of objects as well. A star of less than four solar masses, for example, having gone through its red giant phase, will collapse and move off the main sequence until its collapse is halted by the pressure of electron degeneracy — a white dwarf is the result.

New work out of the RECONS (Research Consortium on Nearby Stars) group at Georgia State has now found observational evidence that helps us pinpoint the distinction between very low mass stars and brown dwarfs. Let me quote from the preprint to their upcoming paper, slated to appear in The Astronomical Journal, to clarify the electron degeneracy issue:

One of the most remarkable facts about VLM [Very Low Mass] stars is the fact that a small change in mass or metallicity can bring about profound changes to the basic physics of the object’s interior, if the change in mass or metallicity places the object in the realm of the brown dwarfs, on the other side of the hydrogen burning minimum mass limit. If the object is unable to reach thermodynamic equilibrium through sustained nuclear fusion, the object’s collapse will be halted by non-thermal electron degeneracy pressure. The macroscopic properties of (sub)-stellar matter are then ruled by different physics and obey a different equation of state… Once electron degeneracy sets in at the core, the greater gravitational force of a more massive object will cause a larger fraction of the brown dwarf to become degenerate, causing it to have a smaller radius. The mass-radius relation therefore has a pronounced local minimum near the critical mass attained by the most massive brown dwarfs…

With these facts in mind, the RECONS team used data from two southern hemisphere observatories, the SOAR (Southern Observatory for Astrophysical Research) 4.1-m telescope and SMARTS (Small and Moderate Aperture Research Telescope System) in Chile, to take measurements of objects thought to lie at the star/brown dwarf boundary. Says Sergio Dieterich, lead author of the paper:

“In order to distinguish stars from brown dwarfs we measured the light from each object thought to lie close to the stellar/brown dwarf boundary. We also carefully measured the distances to each object. We could then calculate their temperatures and radii using basic physical laws, and found the location of the smallest objects we observed. We see that radius decreases with decreasing temperature, as expected for stars, until we reach a temperature of about 2100K. There we see a gap with no objects, and then the radius starts to increase with decreasing temperature, as we expect for brown dwarfs.“

The diagram below makes the distinction clearer: 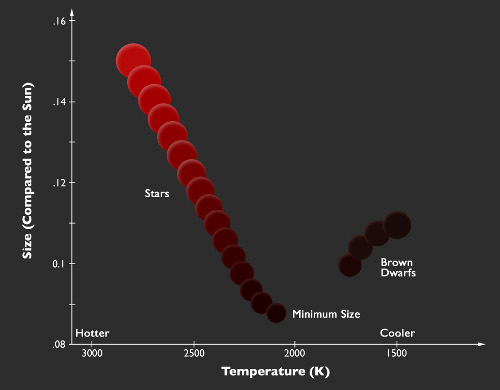 Image: The relation between size and temperature at the point where stars end and brown dwarfs begin (based on a figure from the publication). Credit: P. Marenfeld & NOAO/AURA/NSF.

Notice the temperature drop as the size of main sequence stars declines, then the break between true stars and brown dwarfs. The RECONS research indicates that the boundaries can be precisely drawn: Below temperatures of 2100 K, a radius 8.7 percent that of the Sun, and a luminosity of 1/8000th of the Sun, we leave the main sequence. The team identifies the star 2MASS J0513-1403 as an example of the smallest of main sequence stars. Is the gap between true stars and brown dwarfs right after 2MASS J0513-1403 real or is it the effect of an insufficient sample? To find out, the team is planning a larger search to test these initial results.

Note, too, the interesting distinction in the ages of these objects. Small M-dwarfs can live for trillions of years. Brown dwarfs, on the other hand, have much shorter lifetimes, continually fading over time. Whether they could produce a habitable zone over timeframes sufficient to support life is an open question, one that we’ve looked at in Brown Dwarf Planets and Habitability. Our study of small, dim objects and astrobiology is only beginning.

The paper is Dieterich et al., “The Solar Neighborhood XXXII. The Hydrogen Burning Limit,” accepted at the Astronomical Journal and available as a preprint. See this NOAA/SOAR news release for more.

Previous post: Distant Companions: The Case of HD 106906 b