A recent email from Centauri Dreams regular Carl Keller reminded me about the laser communications tests conducted aboard a NASA satellite. The Lunar Atmosphere and Dust Environment Explorer satellite (LADEE) carried a laser package that demonstrated excellent download and upload rates and successful transmission of two simultaneous channels carrying high-definition video streams to and from the Moon. The fast transmission of large data files shows how useful laser methods will become. 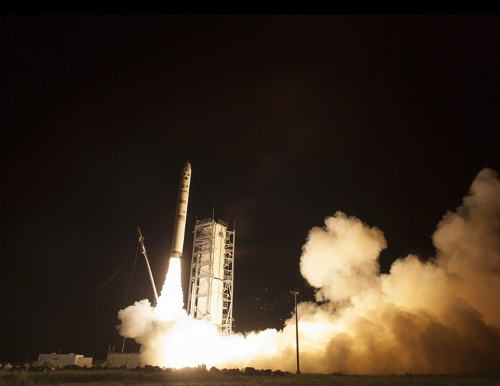 All this is heartening because we need better communications as we begin to build a true infrastructure in the Solar System, while the demands of interstellar communication we’ll eventually need for probes of other stars are even more immense. The easy comparison is sitting right on our desktops in the form of the PCs we use everyday to communicate with the Net. Cable connections make website loading relatively painless, but most of us remember the frustration of early graphics coming in over painfully slow modem connections. Can lasers put the same kind of zip into communications from spacecraft at the edge of the Solar System?

Let’s hope so. I’m remembering the overloads that plague the Deep Space Network, extending decades back. In 1993, the Galileo spacecraft had a chance to take a close look at the asteroid 243 Ida, well worth viewing because the cratered rock was orbited by a ‘moon’. But the DSN also had to handle the load from controllers trying to revive the Mars Observer probe, so that important traffic that would have supported Galileo’s asteroid flyby was diverted. Galileo snapped a photo of Ida anyway, but the problem of overcrowded resources has only gotten worse.

In any case, when we’re talking truly long-distance communications, we have to reckon with the fact that our radio signals drop in intensity with the square of their distance, so a spacecraft ten times farther out than its twin sends a signal that’s fully one hundred times weaker. The numbers on actual missions staggered me when I first ran into them: The signal received from Voyager’s 23 watts was twenty billion times weaker than the power needed to operate a digital wristwatch when the Neptune encounter occurred back in 1989. Put that same signal around Alpha Centauri and it would arrive 81 million times weaker still, as I learned from James Lesh at JPL.

No wonder early starship designers leaned on massive dishes — consider the 40-meter second stage engine bell which, when burned out, the Daedalus craft would employ as a massive communications dish. And in order to process the signals from the starship, the British Interplanetary Society team assumed an Earth-based asset called Project Cyclops, one that would have been armed with a thousand 64-meter antennae. Like Robert Forward, the Daedalus designers as well as the SETI community was thinking big back in the 1970s. 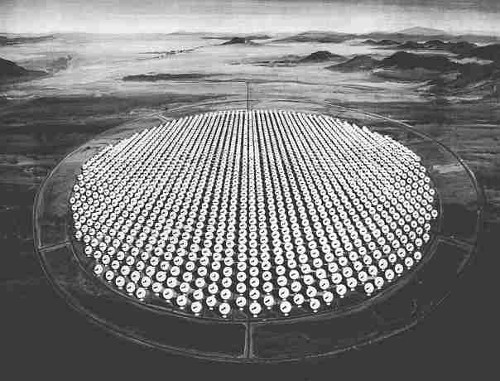 Image: What might have been. The gigantic Cyclops antenna array as envisioned in the 1970s. Credit: Columbus Optical SETI Observatory.

But Daedalus also was conceived as having laser capability that would be used while the craft was under power, and so was the US Navy student project called Project Longshot, which the class that came up with it equipped with six 250-kilowatt lasers, three for communications during the acceleration of the vehicle, and three for communications as Longshot arrived in the Alpha Centauri system. Lasers change the dynamic, but the point is we’re only now testing out the systems that will eventually make them commonplace in space communications.

Radio beams, after all, spread out at a diffraction rate determined by the wavelength of the signal divided by the diameter of the antenna. When we start pushing into higher and higher frequencies, the resulting signal becomes much more narrow. The advantages in reducing spectrum-crowding are supplemented by the laser signal’s ability to carry much more data, as the recent tests aboard LADEE demonstrate. Moreover, the optical telescopes needed aboard a spacecraft can be significantly smaller than the large radio dishes in use today.

Extend all those ideas into the far future and you wind up with an optical installation about the size of the Hubble Space Telescope capable of beaming useful data back to Earth from Alpha Centauri. That’s the 20-watt laser signal that would be beamed back to space-based telescopes in the Solar System, according to JPL’s Lesh in a well-known paper in JBIS. Remember that Voyager signal — it’s now puffed up to well over a thousand times the diameter of the Earth because of beam diffraction. The tight beam of the Centauri laser would get the message through. Of course, a way to propel a communications system as big as Hubble to another star has to be discovered first.

Can we get around all this with gravitational lensing and much smaller equipment? Conceivably, and I’ll have some interesting news about Claudio Maccone’s FOCAL mission to the Sun’s gravitational lens in the next few weeks. I also want to talk a bit more about the LADEE experiments. I’ve mentioned the Lesh paper in these pages before, but here’s the reference again: Lesh, C. J. Ruggier, and R. J. Cesarone, “Space Communications Technologies for Interstellar Missions,” Journal of the British Interplanetary Society 49 (1996): 7–14.