Lasers in our Future

Best wishes for the New Year! I got a resigned chuckle — not a very mirthful one, to be sure — out of a recent email from Adam Crowl, who wrote: “Look at that date! Who imagined we’d still be stuck in LEO in 2014???” Indeed. It’s hard to imagine there really was a time when the ‘schedule’ set by 2001: A Space Odyssey seemed about right. Mars at some point in the 80’s, and Jupiter by the turn of the century, a steady progression outward that, of course, never happened. The interstellar community hopes eventually to reawaken those dreams.

Yesterday’s post on laser communications makes the point as well as any that incremental progress is being made, even if at an often frustrating pace. We need laser capabilities to take the burden off a highly overloaded Deep Space Network and drastically improve our data transfer and networking capabilities in space. The Lunar Laser Communication Demonstration (LLCD) equipment aboard the LADEE spacecraft transmitted data from lunar orbit to Earth at a 622 megabits per second (Mbps) rate in October, a download rate six times faster than any radio systems that had been flown to the Moon. It was an extremely encouraging outcome.

“These first results have far exceeded our expectation,” said Don Cornwell, LLCD manager. “Just imagine the ability to transmit huge amounts of data that would take days in a matter of minutes. We believe laser-based communications is the next paradigm shift in future space communications.” 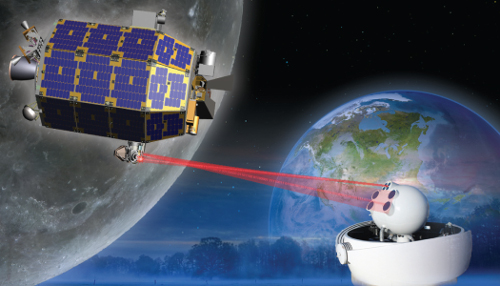 LLCD is actually an overall name for the ground- and space-based components of this laser experiment. What’s aboard the LADEE spacecraft is the Lunar Laser Space Terminal (LLST), which communicates with a Lunar Laser Ground Terminal (LLGT) located in White Sands, New Mexico, a joint project developed between MIT and NASA. There are also two secondary terminals, one at the European Space Agency’s La Teide Observatory (Tenerife), the other at JPL’s Table Mountain Facility in California, where previous laser experiments like GOLD — the Ground-to-Orbit Laser Communication Demonstration — have taken place.

The laser communication between LLCD and ground stations on Earth is the longest two-way laser communication ever demonstrated and a step in the direction of building the next generation of communications capability we’ll need as we explore the Solar System. Imagine data rates a hundred times faster than radio frequencies can provide operating at just half the power of radio and taking up far less space aboard the vehicle. Improvements in image resolution and true moving video would radically improve our view of planetary targets.

Laser methods are proving as workable as we had hoped. The LLCD demonstrated error-free communications during daylight, and could operate when the Moon was within three degrees of the Sun as seen from Earth. Communications were also possible when the Moon was less than four degrees from the horizon as seen from the ground station, and were successful even through thin layers of cloud, which NASA describes as ‘an unexpected bonus.’ A final plus: The demonstrated ability to hand off the laser connection from one ground station to another.

The scientific benefits of lasers are tangible but they’re matched by what could be a rise in public engagement with space if we can produce a networked infrastructure in which video plays a major role. Immersive gaming systems give way to the thought of rovers sending back high-resolution video from exotic places like Titan or Callisto — is this one way to rekindle the passion for exploration that sometimes seems to have died with Apollo? Robotic missions lack the immediacy and glamor of human crews but high bandwidth may help make up the slack, perhaps building momentum for later crewed missions to many of the same targets.

Up next is the Laser Communications Relay Demonstration (LCRD), which recently passed a preliminary design review. LRCD is to be a long-duration optical mission that will tweak optical relay services over a two-year period onboard a commercial satellite built by Space Systems Loral. We’re in the transitional period between demonstrators and reliable flight hardware. After its 2017 launch, LCRD will be positioned above the equator to carry that process forward.

Next post: Ceres, Pluto: Looking Toward the Next New Year