How do you boost the velocity of a star up to 540 kilometers per second? Somewhere in that region, with a generous error range on either side, is the speed it would take to escape the galaxy if you left from our Solar System’s current position. Here on Centauri Dreams we often discuss exotic technologies that could propel future vehicles, but it’s hard to imagine mechanisms that would drive natural objects out of the galaxy at such speeds. Even so, there are ways, as explained by Vanderbilt University’s Kelly Holley-Bockelmann:

“It’s very hard to kick a star out of the galaxy. The most commonly accepted mechanism for doing so involves interacting with the supermassive black hole at the galactic core. That means when you trace the star back to its birthplace, it comes from the center of our galaxy.”

The mechanism works like this: A binary pair of stars moving a bit too close to the massive black hole at the center of the Milky Way loses one star to the black hole while flinging the other outward at high velocity. When you calculate that the black hole has a mass equal to some four million Suns, this works: Stars can indeed be accelerated to galactic escape velocity, and so far a number of blue hypervelocity stars have been found that could be explained this way.

But Holley-Bockelmann and grad student Lauren Palladino have run into something that casts doubt on this explanation, or at least makes us wonder about other methods for making stars travel this fast. Calculating stellar orbits with data from the Sloan Digital Sky Survey, the duo have found about twenty stars the size of the Sun that appear to be hypervelocity stars. Moreover, these are stars whose composition mirrors normal disk stars, leading the researchers to believe they were not formed in the galaxy’s central bulge or its halo. 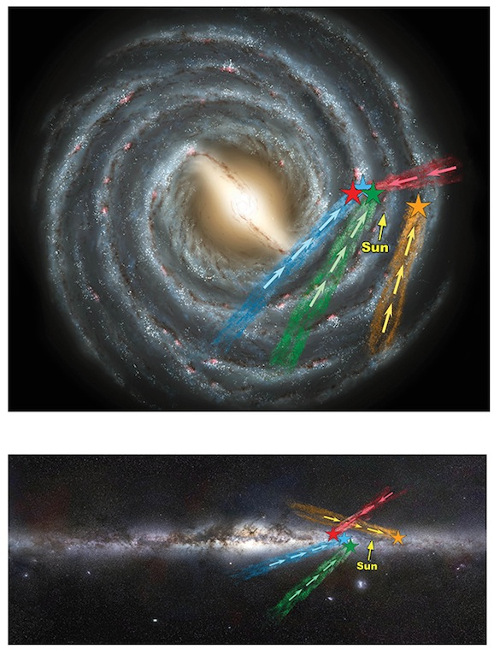 Image: Top and side views of the Milky Way galaxy show the location of four of the new class of hypervelocity stars. These are sun-like stars that are moving at speeds of more than a million miles per hour relative to the galaxy: fast enough to escape its gravitational grasp. The general directions from which the stars have come are shown by the colored bands. (Graphic design by Julie Turner, Vanderbilt University. Top view courtesy of the National Aeronautics and Space Administration. Side view courtesy of the European Southern Observatory).

Holley-Bockelmann and Palladino are working on possible causes for the movement of these stars, including interaction with globular clusters, dwarf galaxies or even supernovae in the galactic disk. The list of possibilities is surprisingly long, as noted in the paper on this work (internal references omitted for brevity):

While the SMBH [supermassive black hole] at the Galactic center remains the most promising culprit in generating HSVs [hypervelocity stars], other hypervelocity ejection scenarios are possible, such as a close encounter of a single star with a binary black hole… In this case, the star gains energy from the binary black hole and is flung out of the Galaxy while the orbit of the black hole binary shrinks…Another alternative hypervelocity ejection model involves the disruption of a stellar binary in the Galactic disk; here a supernova explosion in the more massive component can accelerate the companion to hypervelocities…

We may know more soon, for the paper points out that a nearby supernova should have contaminated the spectrum of a hypervelocity star. As they delve into these and other possibilities, the researchers are also expanding their search for hypervelocity stars to a larger sample within the Sloan data to include all spectral types.

The findings were announced at the meeting of the American Astronomical Society in Washington this week. The paper is Palladino et al., “Hypervelocity Star Candidates in the SEGUE G and K Dwarf Sample,” The Astrophysical Journal Vol. 780, No. 1 (2014), with abstract and preprint available.