Cloudy Encounter at the Core

The supermassive black hole at the center of our galaxy comes to Centauri Dreams‘ attention every now and then, most recently on Friday, when we talked about its role in creating hypervelocity stars. At least some of these stars that are moving at speeds above galactic escape velocity may have been flung outward when a binary pair approached the black hole too closely, with one star being captured by it while the other was given its boost toward the intergalactic deeps.

At a mass of some four million Suns, Sagittarius A* (pronounced ‘Sagittarius A-star’) is relatively quiet, but we can study it through its interactions. And if scientists at the University of Michigan are right, those interactions are about to get a lot more interesting. A gas cloud some three times the mass of the Earth, dubbed G2 when it was found by German astronomers in 2011, is moving toward the black hole, which is 25,000 light years away near the constellations of Sagittarius and Scorpius.

What’s so unusual about this is the time-frame. We’re used to thinking in million-year increments at least when discussing astronomical events, but G2 was expected to encounter Sagittarius A* late last year. The event hasn’t occurred yet but astronomers think it will be a matter of only a few months before it happens. Exactly what happens next isn’t clear, says Jon Miller (University of Michigan), who along with colleague Nathalie Degenaar has been making daily images of the gas cloud’s approach using NASA’s orbiting Swift telescope.

“I would be delighted if Sagittarius A* suddenly became 10,000 times brighter,” Miller adds. “However it is possible that it will not react much—like a horse that won’t drink when led to water. If Sagittarius A* consumes some of G2, we can learn about black holes accreting at low levels—sneaking midnight snacks. It is potentially a unique window into how most black holes in the present-day universe accrete.” 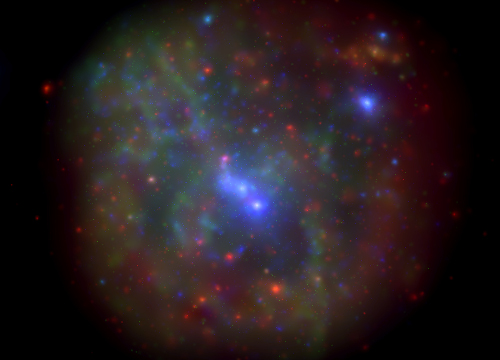 Image: The galactic center as imaged by the Swift X-ray Telescope. This image is a montage of all data obtained in the monitoring program from 2006-2013. Credit: Nathalie Degenaar.

We have much to learn about the feeding habits of black holes. The Milky Way’s black hole isn’t nearly as bright as those in some galaxies. While we can’t see black holes directly because no light can escape from within, we can see the evidence of material falling into them, and it would be useful to know why some black holes consume matter at a slower pace than others. The X-ray wavelengths that Swift studies should give us our best data on the upcoming black hole encounter. A sudden spike in X-ray brightness would presumably mark the event, and the researchers will post the images online.

In studying black hole behavior, we’re also looking at key information about how galaxies live out their lives. After all, these objects are consuming matter and radically affecting the region around the very heart of the galaxy. “The way they do that influences the evolution of the entire galaxy—how stars are formed, how the galaxy grows, how it interacts with other galaxies,” says Nathalie Degenaar. Those of us of a certain age can delight in the recollection of Fred Hoyle’s 1957 novel The Black Cloud, in which a gas cloud approaching the Solar System turns out to be a bit more than astronomers had bargained for. Don’t miss this classic if you haven’t read it yet — you should have plenty of time to finish it before the G2 event.