Spacecraft and Their Messages

Just over 8300 people have now signed the petition supporting the New Horizons Message Initiative. The approach of the 10,000 figure reminds me to jog those who haven’t to stop by the site to sign the petition. For those not yet aware of the NHMI, the idea is to upload a crowdsourced package of images and data to the New Horizons spacecraft once it has completed its science mission at Pluto/Charon and any Kuiper Belt Object within range.

Jon Lomberg’s team calls the NHMI a ‘Voyager Golden Record 2.0,’ a worthy goal indeed, and I’ll also mention that the names of the first 10,000 signing the petition will be uploaded along with the images and data. For me, one of the most interesting aspects of the initiative will be to see how the crowdsourcing project works to determine both the form and the content of the message. New Horizons’ principal investigator Alan Stern has signed off on the idea, saying “I think it will inspire and engage people to think about SETI and New Horizons in new ways.”

While we work on developing this self-portrait of our species, it’s interesting to see the new ‘Messages to Bennu!’ campaign that’s developing through the OSIRIS-REx mission, in conjunction with The Planetary Society. OSIRIS-REx stands for — get ready for it — Origins-Spectral Interpretation Resource Identification Security Regolith Explorer. It’s a robotic mission, to be launched in 2016, that will spend more than two years at Bennu, a 500 meter carbonaceous asteroid. A surface sample will then be returned to Earth in 2023. 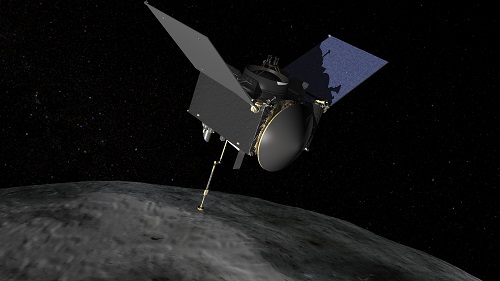 Image: When the OSIRIS-REx asteroid arrives at asteroid Bennu, it will study the asteroid from a distance before swooping down and grabbing a sample. On board the spacecraft will be the names of everybody participating in the “Messages to Bennu!” campaign. Credit: NASA/GSFC/UA.

The ‘messaging’ side of the mission involves putting a microchip with the names of people who have submitted them to The Planetary Society aboard the vehicle. You can sign up to have your name included here. Planetary Society CEO Bill Nye sees the mission of his organization as being ‘to engage the citizens of Earth in space exploration,’ an ongoing campaign that ‘Messages to Bennu!’ incorporates. We can hope that efforts like OSIRIS-REx and the New Horizons Message Initiative help to reawaken an all too lethargic public involvement with space.

The OSIRIS-REx countdown clock actually started on December 9, 2013, looking 999 days ahead to a launch in September of 2016. Principal investigator Dante Lauretta (University of Arizona) clearly likes the mission’s acronym, saying in a UA news release:

“Osiris was formed from pieces scattered across ancient Egypt, where he awoke as the bringer of life and ruler of the underworld. Our spacecraft has a similar story — it will be consist of components fabricated in locations around the world, that once together, will allow us to connect with a near-Earth object that is an accessible remnant from the formation of our solar system.”

As to Bennu, the target asteroid, it is a near-Earth object whose orbit is completed every 436 days, bringing it close to the Earth every six years. The object is considered a B-type asteroid, a subgrouping of the dark, carbonaceous C-type asteroids. These objects are useful for study because they have undergone little processing since the time of their formation. In addition to in situ studies and the sample return, OSIRIS-REx will also help us refine Bennu’s orbit by studying the Yarkovsky effect — the thermal force on the object — constraining the specific properties of the asteroid that make this effect a factor in its future trajectory. That’s useful information to have as we study near-Earth objects and potentially Earth-crossing orbits.