Couple the Keck I 10-meter telescope on Mauna Kea with HIRES (the High-Resolution Echelle Spectrometer) and you get extremely high spectral resolution, making the combination a proven champion at finding planets around other stars. But it was when Justin Crepp (University of Notre Dame) and team followed up seventeen years of HIRES measurements with new observations using NIRC2 (the Near-Infrared Camera, second generation), mounted on the Keck II telescope with adaptive optics, that a nearby brown dwarf could be directly imaged.

HD 19467 B is a T-dwarf more than 100,000 times fainter than its host, a nearby star whose distance (roughly 101 light years) is well established. The team believes the discovery will allow scientists to establish benchmarks that will help define objects with masses between stars and planets. Says Crepp:

“This object is old and cold and will ultimately garner much attention as one of the most well-studied and scrutinized brown dwarfs detected to date. With continued follow-up observations, we can use it as a laboratory to test theoretical atmospheric models. Eventually we want to directly image and acquire the spectrum of Earth-like planets. Then, from the spectrum, we should be able to tell what the planet is made out of, what its mass is, radius, age, etc., basically all relevant physical properties.” 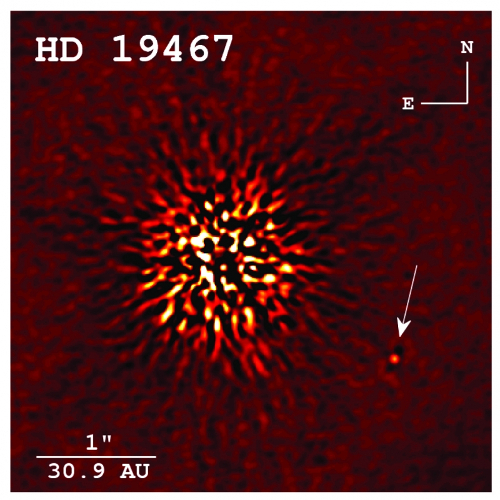 The work grows out of TRENDS (TaRgetting bENchmark-objects with Doppler Spectroscopy), a high-contrast imaging survey using adaptive optics to target older objects orbiting nearby stars. Imaging surveys like these have in general targeted young stars, but TRENDS focuses on older targets for which the existence of an unseen companion has been suggested by earlier radial velocity data. The paper on this work notes that our ability to see these older, fainter objects is improving with recent advances in high-contrast imaging techniques and hardware.

TRENDS looks for faint companions and thus far has uncovered a number of high mass ratio binary stars, a triple star system (HD 8375) and a white dwarf companion orbiting HD 114174. But here’s why Crepp speaks of using this brown dwarf discovery as a model. From the paper:

By connecting the properties of directly imaged companions to that of their primary star (such as metallicity and age), these objects serve as useful test subjects for theoretical models of cool dwarf atmospheres… Further, the combination of Doppler observations and high-contrast imaging constrains the companion mass and orbit, essential information that brown dwarfs discovered in the field or at wide separations by seeing-limited instruments do not provide.

I learned from the paper that while many nearby brown dwarfs have been discovered by surveys scanning large areas of the sky at optical, near-infrared and mid-infrared wavelengths, only a few are members of multiple systems. Even these are at large separations from the host star given that the glare of the primary makes it so difficult to see ultra-cold dwarfs in closer orbits. The significance of HD 19467 B, then, is that this is the first directly imaged T-dwarf orbiting a Sun-like star with a measured Doppler acceleration, meaning it will be among the first to have a dynamically measured mass. As studies continue, what Crepp and team have found should turn out to be an important benchmark in the investigation of how brown dwarfs evolve.