What Makes a Planet ‘Superhabitable’?

Friday’s look at habitable zones, and the possibilities of life below the surface or in the atmosphere of an exoplanet, segues naturally into the fascinating notion of ‘superhabitable’ worlds. René Heller (McMaster University) and John Armstrong (Weber State University) ponder the possibilities in a recent paper for Astrobiology. What if, the scientists ask, our notions of habitability are too closely crafted to our own anthropocentric viewpoint? Could there be planets that are actually more habitable than the Earth? Should the Earth itself be considered, with respect to a broader view of biology, only marginally habitable?

The question has important ramifications for how we approach the search for other habitable worlds. We study extremophilic life forms on Earth and question whether conditions even more bizarre than these could still produce life. But Heller and Armstrong reframe the issue:

The word ‘bizarre’ is here to be understood from an anthropocentric point of view. From a potpourri of habitable worlds that may exist, Earth might well turn out as one that is marginally habitable, eventually bizarre from a biocentric standpoint. In other words, it is not clear why Earth should offer the most suitable regions in the physicochemical parameter space that can be tolerated by living organisms. Such an anthropocentric assumption could mislead research for extrasolar habitable planets because planets could be non-Earth-like but yet offer more suitable conditions for the emergence and evolution of life than Earth did or does; that is, they could be superhabitable. 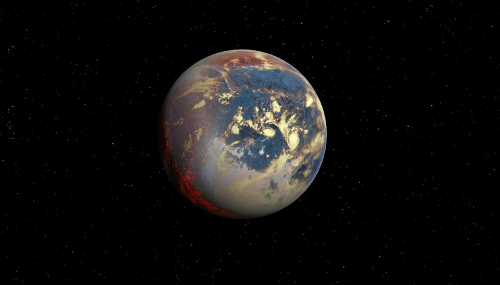 Image: A super-Earth, as depicted in this artist’s impression of HD 215497 b, could actually be more ‘habitable’ than the Earth, according to Heller and Armstrong’s new work, which re-examines our ideas about the conditions needed for life. Credit: Wikimedia Commons.

Heller and Armstrong stick with liquid water as a prerequisite for life, so their extrapolations are incremental, but the proposal to enter a new word into the lexicon is bold enough. So let’s consider what ‘superhabitability’ might mean. One possibility is that a larger world (though not large enough to cause plate tectonics to cease) could offer more spacious conditions for life’s development. Planets with what the duo call ‘fractionate continents and archipelagos’ should produce a wider diversity of habitats, their spacious shallow waters offering higher biodiversity than Earth’s deep oceans. The paper leans toward dry planets with a lower fractional surface coverage of water, where liquid water is abundant but distributed into many reservoirs.

The elements of superhabitability multiply. Plate tectonics allow us to speculate on super-Earths with masses up to about two Earth masses. Beyond this, high pressures in the mantle reduce the likelihood of tectonic activity (the two Earth masses used here is a deliberately conservative figure). Also needed: An intrinsic magnetic field produced by a liquid, rotating, convecting core to protect the planet from high-energy cosmic radiation. And the biodiversity of Earth seems to multiply in periods of warmer conditions, suggesting that a warmer version of Earth might have extended tropical zones and, over the course of aeons, a greater variance in biological forms.

The factors at play in Heller and Armstrong’s speculations make for interesting scenarios. Imagine a solar system with more than a single terrestrial planet or moon in the habitable zone. More even distribution between the Earth and the Moon would have resulted in a double-planet, with both objects habitable. Or imagine switching Mars and Venus, to potentially produce three habitable planets. Some systems, indeed, might be ‘multihabitable,’ with massive moons around gas giants and the possibility of panspermia within the system to spread local biology.

Or ponder moving the Earth, which some recent work describes as being at the very inner edge of the Sun’s habitable zone. A terrestrial world located closer to the center of the HZ could be considered superhabitable because it would be more resistant to runaway greenhouse states than the Earth is. Or perhaps age is itself a condition for superhabitability. Heller and Armstrong make the case that the Earth experienced greater biodiversity as it aged — thus the introduction of oxygen about 2.5 billion years ago (from oceanic algae) led to greater habitability on the surface, allowing life to move onto the continents, an increase in planetary habitability.

And what of the star the planet orbits? The authors see K stars as offering a compromise between initial and long-term high-energy radiation, making them favorable hosts for superhabitable worlds. From the paper:

That, of course, gets us to the K-class star we have so often discussed in these pages, Alpha Centauri B. We already have one planetary candidate around it, an Earth-mass planet in a 3.235-day orbit. In terms of age, recent work based on asteroseismology, chromospheric activity and other means shows it to be a bit older than the Sun, with estimates ranging from 4.85 billion years up to about 6.5 billion. The authors note that a planet in the habitable zone around this star, collecting water from objects beyond the snowline, could have had primitive life forms when the Earth had just collided with the Mars-sized object that would be responsible for the Moon. 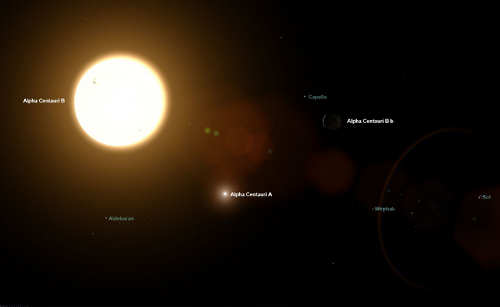 Image: Artist’s impression of Alpha Centauri B, with Centauri A in the distance and the planet candidate Centauri B b also marked. Credit: Adrian Mann.

Heller and Armstrong note that our exoplanet studies have shown us that the Solar System is anything but typical when it comes to planetary systems, so it may well be that the Earth is itself atypical when it comes to inhabited worlds. In that sense — and they make this point specifically — their work refutes the Ward and Brownlee ‘rare Earth hypothesis’ that saw life as an extremely unlikely phenomenon emerging from a wide range of precise conditions. Perhaps what Ward and Brownlee are seeing, says this new work, is the emergence of an only marginally habitable world. If so, our search for inhabited planets should take in worlds slightly older and slightly more massive than our own, preferably those orbiting K-class stars like the close-by Centauri B.

Can we create a biocentric model to use in our search for habitable worlds that replaces our anthropocentric expectations? This paper makes a spirited run at the idea. The paper is Heller and Armstrong, “Superhabitable Worlds,” Astrobiology Vol. 14, No. 1 (2014), available online. The work is thick with ideas, and I didn’t have time today to go into the ‘terrestrial menagerie’ discussed in its first part, which shows not only how planets in the habitable zone can be rendered uninhabitable but how exomoons beyond the HZ may be rendered life-bearing. I suspect, though, that we’ll be coming back to these arguments again soon. Thanks to the numerous readers who forwarded links to this paper.