An Intergalactic River of Hydrogen?

NGC 6946, the so-called ‘Fireworks Galaxy,’ has caught the eye of many an astronomer, even if its position — close to the plane of the Milky Way and thus partially obscured by gas and dust — makes the observation difficult. At 22 million light years from Earth, this face-on spiral galaxy has been the site of eight supernovae in the past century. I’m thinking about supernovae because SN 2014J, a supernova a scant 12 million light years away in M82, has been much in the news in recent days. But NGC 6946 is also intriguing because of the active pace of star formation there. What sustains a galaxy like this and keeps its star formation robust? 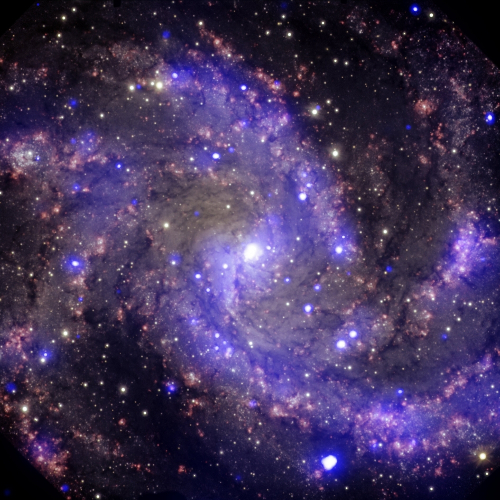 Now D. J. Pisano (West Virginia University) has discovered what appears to be a flow of hydrogen through intergalactic space, a gaseous filament streaming into NGC 6946 that can explain its active engine of star formation. Pisano puts the find in context:

“We knew that the fuel for star formation had to come from somewhere. So far, however, we’ve detected only about 10 percent of what would be necessary to explain what we observe in many galaxies. A leading theory is that rivers of hydrogen – known as cold flows – may be ferrying hydrogen through intergalactic space, clandestinely fueling star formation. But this tenuous hydrogen has been simply too diffuse to detect, until now.”

Galaxies where the rate of star formation is highest are known as ‘starburst’ galaxies, their activity considered a phase of the galaxy’s evolution. M82, site of the recent supernova, ranks as one of these. NGC 6946 can’t claim that level of activity, but the galaxy — found in the night sky between the constellations Cepheus and Cygnus — is a good deal more active than our relatively sedate Milky Way. And while an extended hydrogen halo has previously been observed in NGC 6946, the likely result of intense star formation and supernova explosions, what Pisano has discovered comes from a different source — intergalactic space. 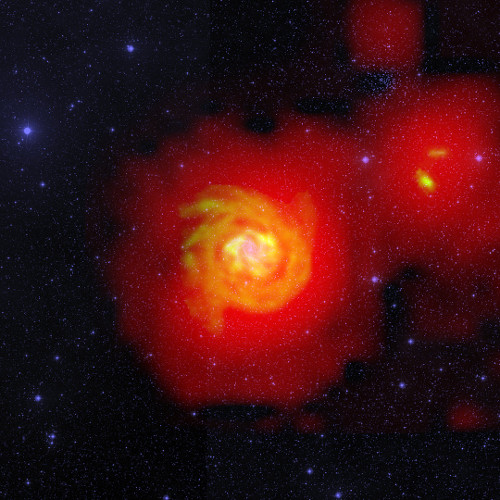 Image: This composite contains three distinct features: the bright star-filled central region of galaxy NGC 6946 in optical light (blue), the dense hydrogen tracing out the galaxy’s sweeping spiral arms and galactic halo (orange), and the extremely diffuse and extended field of hydrogen engulfing NGC 6946 and its companions (red). The new GBT data show the faintly glowing hydrogen bridging the gulf between the larger galaxy and its smaller companions. This faint structure is precisely what astronomers expect to appear as hydrogen flows from the intergalactic medium into galaxies or from a past encounter between galaxies. Credit: D.J. Pisano (WVU); B. Saxton (NRAO/AUI/NSF); Palomar Observatory – Space Telescope Science Institute 2nd Digital Sky Survey (Caltech); Westerbork Synthesis Radio Telescope

Working with the Green Bank Telescope, Pisano was able to uncover the signature of neutral hydrogen gas that had eluded other instruments. A steady flow of cold hydrogen could explain why larger galaxies are able to maintain their activity as they draw star-forming material from less massive neighbor galaxies. But Pisano can’t rule out the possibility that the gaseous fields shown in the image above could also be the result of an encounter with another galaxy in the distant past, one that left a ribbon of star-forming hydrogen behind. From the paper:

The best way to identify cold flows is statistically via a large survey. Cold flows should preferentially exist around low mass galaxies in low density environments. Tidal debris, on the other hand, should exist preferentially around galaxies in high density environments. Galactic outflows should preferentially exist around galaxies with low masses and large star formation rates. The ideal H I survey would span a wide range of galaxy mass, environment, and star formation rates to discriminate between these different origins.

Such a survey is precisely what Pisano now has in progress, with results to be announced in the near future. Given that the observed rate of hydrogen accretion in nearby galaxies is only ten percent of what would be needed to maintain star formation, we have a lot to learn about how galaxies sustain themselves. The work has also identified an extended disk around the galaxy NGC 2997 and its satellite galaxies, but no filamentary structures of the kind found at NGC 6946, where the hydrogen flow is evidently connected with the nearest satellite galaxies.