The same issue of Nature that carried Ian Crossfield’s weather map of Luhman 16B, published yesterday, also featured a paper from Francesca DeMeo on planetary systems in chaos. Specifically, DeMeo (a Hubble postdoctoral fellow at the Harvard-Smithsonian Center for Astrophysics), looks at main belt asteroids in terms of their composition and history. Her findings reveal an early system nothing like the relatively sedate situation we see today, with small, rocky worlds near to the Sun and gas giants on much more distant orbits.

Indeed, the migration of giant planets produced what DeMeo likens to “flakes in a snow globe” as asteroids were disrupted and interplanetary debris was thrown into new trajectories. The dynamical processes thus unleashed may have played a huge role in Earth’s development.

Working with data from the Sloan Digital Sky Survey, DeMeo teamed with Benoit Carry (Paris Observatory) to chart more than 100,000 asteroids throughout the Solar System, finding that especially among the smaller objects in the main belt, the diversity is much more pronounced than astronomers had realized. A simple progression from wet to dry as asteroids get closer to the Sun appears to be ruled out, and so-called ‘rogue’ asteroids — ones that formed in a dry environment and are now beyond the snow line, for example — may be more common than previously thought, an effect that is most evident in the population of smaller asteroids.

“It’s like Jupiter bowled a strike through the asteroid belt,” says DeMeo. Everything that was there moves, so you have this melting pot of material coming from all over the solar system.” 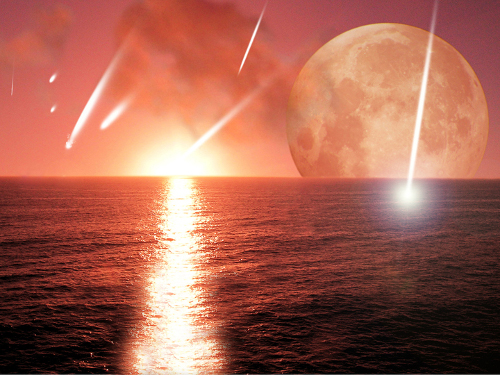 Image: Astronomers have theorized that long-ago asteroid impacts delivered much of the water now filling Earth’s oceans, as shown in this artist’s conception. If true, the stirring provided by migrating planets may have been essential to bringing those asteroids into play. Credit: David A. Aguilar (CfA).

Planetary migration may have brought Jupiter as close to the Sun as Mars is now, scouring the asteroid belt to leave little more than a tenth of one percent of its original population. Such migrations would have stirred the entire system, so that objects collected in the asteroid belt with origins as varied as close solar orbits to the distant realm of Neptune. And if this is the case, this shake-up of interplanetary materials may have delivered much of the water found in today’s oceans to Earth. This may be a key mechanism for bringing volatiles from beyond the snow line to warm but dry rocky worlds as planets capable of supporting life emerge elsewhere.