I see a lot to like about Abraham Loeb’s new paper “The Habitable Epoch of the Early Universe,” available as a preprint and now going through the submission process at Astrobiology. Not that it isn’t controversial, and for reasons that are patently obvious as soon as one digs into it. But the sheer chutzpah of postulating that microbial life might have started up no more than ten or fifteen million years after the Big Bang takes the breath away. This is a notion that extends life so far back that it defies our conventional models of how it formed.

Temperatures aren’t the problem, given that radiation in the early universe would have produced cozy conditions for a multi-million year window of time as what is now called the cosmic microwave background (CMB) continued to cool. The problem is that we have to get from hydrogen and the helium created by fusion in the Big Bang furnace to heavy elements that are usually explained by large stars seeding the cosmos with supernovae explosions. So we need to figure out whether or not such stars could have formed at this remarkably early epoch. 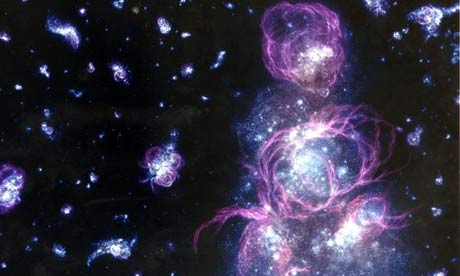 Image: An artist’s impression of how the very early universe might have looked as star formation began. Photograph: Adolf Schaller/AP.

Loeb argues that the first star-forming halos begin to collapse in this era. Certain density perturbations in this environment, rare but feasible, could have given birth to the stars we need, themselves the harbingers of the first rocky planets, which would have existed in a CMB radiation warm enough for liquid water to exist on their surface. Or as he puts it in the preprint:

Deviations from Gaussianity in the far (8.5σ) tail of the probability distribution of initial density perturbations, could have led already at these redshifts to the birth of massive stars, whose heavy elements triggered the formation of rocky planets with liquid water on their surface. And even as the CMB continued to cool, the thermal gradients needed for life would still be created through geothermal energy as well as radioactive energies from unstable elements in the primordial supernovae. A blanket of molecular hydrogen could retain that warmth.

At a redshift of z ∼ 100, which Loeb regards as ‘the earliest cosmic epoch after which life was possible in our Universe,” we are dealing with a time when the universe was far denser than it is today, perhaps a million times as much, or approximately 1 hydrogen atom per cubic centimeter. This is typical of the average density of matter in galaxies, but imagine this density extended over the entire universe in that era. I should note that I’m drawing from Loeb here but also from Edward Harrison’s Cosmology: The Science of the Universe (Cambridge, 2000). When we go this far back, to a time 10 to 17 million years after the Big Bang, the cosmic microwave background has reached a temperature of 273-373 K (0-100 degrees Celsius).

The density issue is intriguing. A certain density of matter must exist within the universe to avoid a Big Crunch, with the entire cosmos falling back in on itself because of gravity, and recent work indicates that baryonic matter combined with still mysterious dark matter can account for 30 percent of that critical density. The balance is provided by a cosmological constant, an idea introduced by Einstein and later given punch by the discovery of cosmic acceleration in 1998.

It was back in 1987 that Stephen Weinberg argued that if the cosmological constant were just one order of magnitude larger than observed, stars would never form nor, obviously, would life. Loeb looks askance at that conclusion at the end of his paper, especially given the possibility that the amplitude of the initial density perturbations might have varied in different regions of the presumed multiverse. He makes the case that life could emerge with a cosmological constant that is (1 + z)3 ~ 106 bigger than observed. “The possibility of life starting when the average matter density was a million times bigger than it is today argues against the anthropic explanation for the low value of the cosmological constant.”

So we wind up with a new kind of habitable planet, one we are now considering for the first time. Yes, we can talk about liquid water on its surface, and we can throw in geothermal activity as well and radiogenic heating, but we might not need a star to nourish it given the help of the cosmic microwave background’s heat energy. As I say, it’s a fascinating concept, and one I don’t think I’ve run into in the most speculative science fiction. That situation should change soon enough as some talented practitioners of the trade get a close look at Loeb’s conclusions.