SETI at the Particle Level

A big reason why the Fermi paradox has punch is the matter of time. Max Tegmark gets into this in his excellent new book Our Mathematical Universe: My Quest for the Ultimate Nature of Reality

(Knopf, 2014), where he runs through what many thinkers on the subject have noted: Our Sun is young enough that countless stars and the planets that orbit them must have offered homes for life long before we ever appeared. With at least a several billion year head start, wouldn’t intelligent life have had time to spread, and shouldn’t its existence be perfectly obvious by now?

Tegmark’s book is fascinating, and if you’re interested in learning why this dazzling theorist thinks it likely we are the only intelligent life not just in our galaxy but in our universe, I commend it to you (although Fermi issues play only the tiniest of roles in its overall themes). I’ll have plenty of occasion to get into Tegmark’s ideas about what he believes to be not just a multiverse but a multiply-staged multiverse (i.e., four different kinds of multiverse) in coming days. But today I want to look at yet another Fermi speculation, this one by the Australian artificial intelligence researcher Hugo de Garis. 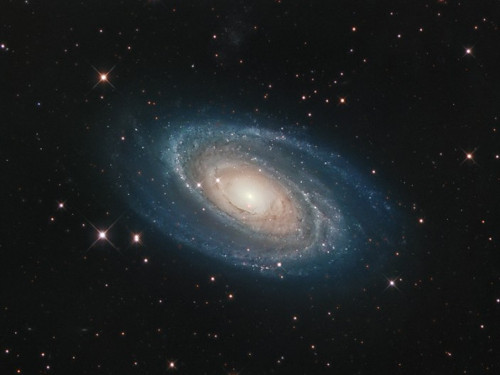 Image: The spiral galaxy M81 would seem to offer countless possible environments for life. But is there a SETI case to be made not just on the galactic level, but on the level of the very small? Image credit & copyright: Giovanni Benintende.

If SETI is giving us no evidence of extraterrestrials, maybe it’s because we’re looking on too large a scale. What if, in other words, truly advanced intelligence, having long ago taken to non-biological form, finds ways to maximize technology on the level of the very small? Thus de Garis’ interest in femtotech, a technology at the level of 10-15 meters. The idea is to use the properties of quarks and gluons to compute at this scale, where in terms of sheer processing power the improvement in performance is a factor of a trillion trillion over what we can extrapolate for nanotech.

I leave you to the two de Garis essays listed at the end of this article for the particulars on how this might be accomplished, including thoughts on moving beyond femtotech to ‘attotech’ and even what he calls ‘zeptotech’ (using possibly existing force particles that would mediate the grand unified force of the electroweak force and the color force; i.e., the strong nuclear force). It turns out that the vast improvement from nanotech to femtotech is based on factors like the density being a million cubed times greater, while the signaling speed between femto components would be a million times faster because such components are so much closer together, and so on.

If artilects are the future of biological life forms — their successors, actually — then wouldn’t there be pressure to gradually downgrade to nanotech scale (nanolects) and eventually to femtotech levels? Such a ‘downgrade’ is actually an upgrade, of course, and continuing to downgrade as far as possible would only make sense as long as huge performance gains can be achieved.

Thus de Garis’ conclusion (the italics are his):

The hyper intelligences that are billions of years older than we are in our universe (which is about 3 times older than our sun), have probably “downgraded” themselves to achieve hugely greater performance levels. Whole civilizations may be living inside volumes the size of nucleons or smaller.

Given this perspective, conventional SETI through radio or even Dysonian methods (i.e., looking for the signatures of macro-engineering, as recently discussed in these pages in Jason Wright’s Glimpsing Heat from Alien Technologies) begins to look incomplete. Indeed, de Garis refers to it as ‘provincial,’ arguing that while he would not want the SETI effort to be canceled, he does believe that any radio-emitting civilizations out there are most likely not the most intelligent beings in the universe. To find the truly advanced civilizations, we would need to look on the level of the very small:

Therefore I recommend that humanity start thinking about ways to detect their presence. We need a SIPI, a Search for Infra Particle Intelligence. For example, why are the elementary particles such “carbon copies” of each other, for each particle type? Once one starts “seeing” intelligence in elementary particles, it changes the way one looks at them, and the way one interprets the laws of nature, and the interpretation of quantum mechanics, etc. It’s a real paradigm shift away from looking for non human intelligence in outer space, to looking for it in inner space, i.e. SIPI.

I remember lively discussions with several fellow writers over the years on the question of whether we might miss an extraterrestrial civilization’s signature because it was small. Indeed, one colleague speculated, the Earth itself could be under intense observation through a nanotechnology network that would be completely outside our range of observation. Where SIPI brings us is into a realm where even nanotech seems like a bulky and rather clumsy way to proceed. It’s a Fermi solution wild enough to galvanize many a future SETI conversation.

The relevant essays are de Garis, “Femtotech: Computing at the Femtometer Scale
Using Quarks and Gluons” (full text available at kurzweilai.net) and “X-Tech and the Search for Infra Particle Intelligence” (available at h+ Magazine).

Previous post: Unusually Red Brown Dwarfs (and What They Tell Us)