It was just a year ago, on February 15, 2013, that the 30-meter asteroid 2012 DA14 whisked past the Earth at a distance of well less than 30,000 kilometers, inside the orbits of our geosynchronous satellites. If you don’t recall 2012 DA14, it’s probably because it was later on the same day that the Chelyabinsk impactor struck, a 20-meter asteroid that released the energy of approximately 460 kilotons of TNT. Chelyabinsk made it into 2014 Olympic news at Sochi, with ten gold medals for February 15 winners being embedded with fragments from the object.

Today we get the passage of near-Earth asteroid 2000 EM26, whose closest approach will be covered by the Slooh network of automated telescopes starting at 2100 EST (0200 UTC), live from the Canary Islands. An iPad app is available or you can watch on Slooh.com, with the live image stream accompanied by commentary from astronomer Bob Berman and guests discussing the event and fielding questions from viewers using the hashtag #asteroid. Berman notes the significance of asteroid tracking and developing future mitigation strategies:

“On a practical level, a previously-unknown, undiscovered asteroid seems to hit our planet and cause damage or injury once a century or so, as we witnessed on June 20, 1908, and February 15, 2013. Every few centuries, an even more massive asteroid strikes us — fortunately usually impacting in an ocean or wasteland such an Antarctica. But the ongoing threat, and the fact that biosphere-altering events remain a real if small annual possibility, suggests that discovering and tracking all NEOs, as well as setting up contingency plans for deflecting them on short notice should the need arise, would be a wise use of resources.”

The Challenge of Asteroid Capture

With almost 11,000 near-Earth objects now discovered, the astronomical community continues its work on planetary defense. The Asteroid Redirect Mission (ARM) is NASA’s bid to find a small asteroid that can be parked in a lunar orbit for study and thorough exploration in the 2020s. This JPL news release gives us more information about ARM’s current status, noting two possible scenarios: An entire small asteroid could be captured and redirected into lunar orbit, or a large boulder or other mass from a larger asteroid could be retrieved and put into a similar orbit. 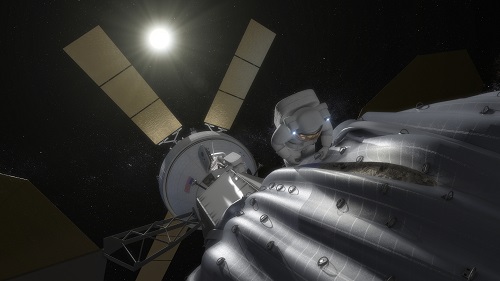 Image: This concept image shows an astronaut preparing to take samples from the captured asteroid after it has been relocated to a stable orbit in the Earth-moon system. Hundreds of rings are affixed to the asteroid capture bag, helping the astronaut carefully navigate the surface. Credit: NASA/JPL.

But finding the right asteroid is tricky business. Most near-Earth asteroids are either too large or in unsuitable orbits, and would-be targets can move out of range of our instruments so fast that it becomes a challenge to get enough data to make the call. The goal is something smaller than about twelve meters across, says Paul Chodas, a senior scientist in the Near-Earth Object Program Office at JPL. He adds: “There are hundreds of millions of objects out there in this size range, but they are small and don’t reflect a lot of sunlight, so they can be hard to spot. The best time to discover them is when they are brightest, when they are close to Earth.”

The news release goes through the detection and analysis process. The coordinates of objects detected by asteroid surveys flow to the Minor Planet Center in Cambridge, MA, where the objects can be tagged as previously known or else given a new designation. Orbit, intrinsic brightness and other data are then refined by the Near-Earth Object Program Office at JPL, which updates its online small body database. Now in place for the projected asteroid redirect mission is a new screening process that scans for candidate objects.

Radar observations by the Deep Space Network at Goldstone (CA) or Arecibo Observatory in Puerto Rico can produce further data on orbit and size if they are able to track the asteroid, but other observatories both professional and amateur may also be asked to look at it. The Infrared Telescope Facility at Mauna Kea can provide details on spectral type, reflectivity and likely composition. Several dozen 6- to 12-meter asteroids are thought to fly by the Earth at a distance closer than the Moon every year, but few of these are in suitable orbits for the ARM mission.

Even so, the wave of new technology now approaching should make finding the right object a sure thing. Lindley Johnson (Near-Earth Objects Program, NASA headquarters) notes what we can expect:

“The NASA-funded Catalina Sky Survey, which has made the majority of NEO discoveries since its inception in 2004, is getting an upgrade. We also will have new telescopes with an upgraded detection capability, like PanSTARRS 2 and ATLAS, coming online soon, and the Defense Advanced Research Projects Agency’s new Space Surveillance Telescope will give us a hand as well.”

And don’t forget our old friend WISE, which I usually write about in terms of brown dwarfs in the Sun’s vicinity. The repurposed spacecraft now functions as NEOWISE and may help in characterizing targets for the redirect mission.

Potential candidates are being flagged at the rate of about two per year, a number that is bound to climb as these further resources come into play. We’ll then have a target and a plan as we proceed in our efforts to characterize these objects. NASA is assuming that an Orion spacecraft and Space Launch System (SLS) rocket will make asteroid capture happen, but whatever the hardware, studying small asteroids up close — and ultimately developing strategies for nudging the trajectories of much larger objects — is a vital part of future planetary defense.