We have several months yet before the European Space Agency’s Gaia mission enters its five-year operational phase. But you can see an important milestone in the image below. Gaia’s two telescopes have to be aligned and focused as its other instruments are calibrated. Testing involves downloading data like this image of NGC1818, a young star cluster in the Large Magellanic Cloud. The image covers an area something less than one percent of the spacecraft’s full field of view. Launched on December 19, 2013, Gaia now orbits around the L2 Lagrangian point some 1.5 million kilometers from Earth. 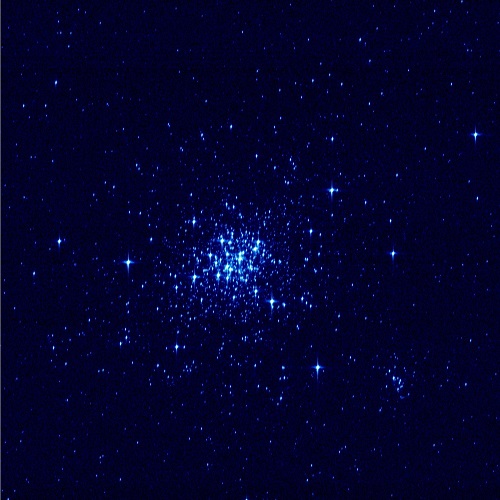 Image: A calibration image from Gaia is part of early testing of the mission’s systems. Credit: ESA/DPAC/Airbus DS.

Gaia inevitably makes me think of Hipparcos, an earlier ESA mission launched in 1989 devoted to precision astrometry, the measurement of proper motions and parallaxes of stars to help us figure out their distance and tangential velocity. What a far cry Hipparcos was from the days when Thomas Henderson, then observing at the Cape of Good Hope, was trying to measure the parallax of Alpha Centauri, all the while dueling with the German astronomer Friedrich Wilhelm Bessel to demonstrate that the method could give us a distance measurement to a star.

Bessel’s work on 61 Cygni took precedence but both astronomers proved that the closest stars could be measured using the instruments of their day. But measuring star positions from the ground has always been tough thanks to atmospheric effects and instrument limitations. And as we looked further and further from our own stellar neighborhood, these methods grew more challenging still, which is why proposals for a space mission devoted to astrometry began as early as 1967. The Hipparcos Catalog was released in 1997, covering precise measurements of almost 120,000 stars, with less precise readings on about a million more.

Now we have Gaia, which will chart 10,000 times as many stars as Hipparcos, with measurements of their position and motion that are 100 times more accurate. If all goes well, we should wind up with the largest three-dimensional map of the Galaxy ever created, charting one billion stars in terms of their distribution, brightness, temperature, composition and motion. Gaia should firm up our understanding of galactic structure while making numerous exoplanet finds and uncovering vast numbers of brown dwarfs. We can expect measurements of 500,000 quasars in the distant universe and, much closer to home, data on new asteroids.

It’s an ambitious mission, one that contains twin optical telescopes and their imaging system, a radial velocity spectrometer and blue/red photometers. The telescopes will focus their light onto a 106 CCD focal plane array with almost one billion pixels, making Gaia’s the largest digital camera yet deployed in space. The two telescopes will monitor each target star about 70 times over the five year mission, sweeping the entire sky in the process, their repeated measurements teasing out the parallax and true motion of each object. Objects down to magnitude 20 are in range, and according to this ESA backgrounder, the accuracy will range from 20 percent for stars near galactic center to 0.001 percent for stars closest to the Solar System.

Every one of Gaia’s billion stars will have been observed in the first six months of operations once calibrations are completed, but it’s the repeated observations over five years that will allow accurate determination of stellar distances and motion, with the final catalog not scheduled to be released until three years after the end of the mission. We need to keep a close eye on Gaia. It is essentially bringing our fuzzy maps of the Milky Way into much higher resolution, with implications for existing work like Kepler’s — Gaia will be able to give us accurate information about distance and motion for the planet-bearing systems Kepler has thus far found. A million gigabytes of data are in store as Gaia’s enormous catalog deepens our view of the galaxy.