I discovered Karl Schroeder’s work when I was researching brown dwarfs some years ago. Who knew that somebody was writing novels about civilizations around these dim objects? Permanence (Tor, 2003) was a real eye-opener, as were the deep-space cultures it described. Schroeder hooked me again with his latest book — heŌĆÖs dealing with a preoccupation of mine, a human presence in the deep space regions between ourselves and the nearest stars, where resources are abundant and dark worlds move far from any sun. How to maintain such a society and allow it to grow into something like an empire? Karl explains the mechanism below. Science fiction fans, of which there are many on Centauri Dreams, will know Karl as the author of many other novels, including Ventus (2000), Lady of Mazes (2005) and Sun of Suns (2006). 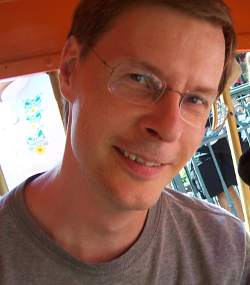 My newest science fiction novel, Lockstep, has just finished its serialization in Analog magazine, and Tor Books will have it on the bookshelves March 24. Reactions have been pretty favourableŌĆöexcept that IŌĆÖve managed to offend a small but vocal group of my readers. It seems that some people are outraged that IŌĆÖve written an SF story in which faster than light travel is impossible.

I did write Lockstep because I understood that itŌĆÖs not actual starflight that interests most peopleŌĆöitŌĆÖs the romance of a Star Trek or Star Wars-type interstellar civilization they want. Not the reality, but the fantasy. Even so, I misjudged the, well, the fervor with which some people cling to the belief that the lightspeed limit will just somehow, magically and handwavingly, get engineered around.

This is ironic, because the whole point of Lockstep was to find a way to have that Star Wars-like interstellar civilization in reality and not just fantasy. As an artist, IŌĆÖm familiar with the power of creative constraint to generate ideas, and for Lockstep I put two constraints on myself: 1) No FTL or unknown science would be allowed in the novel. 2) The novel would contain a full-blown interstellar civilization exactly like those you find in books with FTL.

Creativity under constraint is the best kind of creativity; itŌĆÖs the kind that really may take us to the stars someday. In this case, by placing such mutually contradictory ŌĆö even impossible ŌĆö restrictions on myself, I was forced into a solution that, in hindsight, is obvious. It is simply this: everyone I know of who has thought about interstellar civilization has thought that the big problem to be solved is the problem of speed. The issue, though (as opposed to the problem), is how to travel to an interstellar destination, spend some time there, and return to the same home you left. Near-c travel solves this problem for you, but not for those you left at home. FTL solves the problem for both you and home, but with the caveat that itŌĆÖs impossible. (Okay, okay, for the outraged among you: as far as we know. To put it more exactly, we canŌĆÖt prove that FTL is impossible any more than we can prove that Santa Claus doesnŌĆÖt exist. IŌĆÖll concede that.) 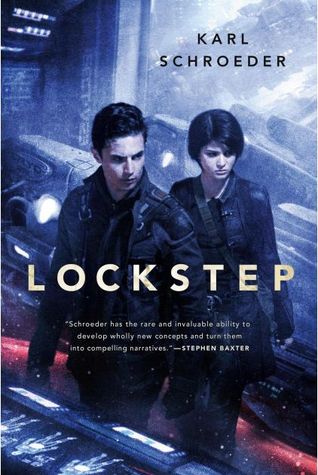 Generations of thinkers have doubled down on trying to solve the problem, unaware that the problem is not the same as the issue. The problem ŌĆö of generating enough speed to enable an interstellar civilization ŌĆö may be insoluble; but that doesnŌĆÖt mean the issue of how to have a thriving interstellar civilization canŌĆÖt be overcome. You just have to overcome it by solving a different problem.

The problem to solve doesnŌĆÖt have to do with speed (or velocity, for you purists), but rather with duration.

Enter Lockstep. In the novel, all worlds, all spacecraft and all habitats participating in a particular civilization use cold-sleep technology ŌĆ£in lockstep:ŌĆØ the entire civilization sleeps for thirty years, then simultaneously wakes for a month, then sleeps for another thirty years, etc. All citizens of the lockstep experience the same passage of time; whatŌĆÖs changed is that the duration of one night per month is stretched out to allow time for star travel at sublight speeds. In the novel I donŌĆÖt bother with interstellar travel, actually; the Empire of 70,000 Worlds consists almost entirely of nomad planets, wanderers populating deep space between Earth and Alpha Centauri. Average long-distance travel velocity is about 3% lightspeed, and ships are driven by fission-fragment rockets or ŌĆśsimpleŌĆÖ nuclear fusion engines.

The result is a classic space opera universe, with private starships, explorers and despots and rogues, and more accessible worlds than can be explored in one lifetime. There are locksteppers, realtimers preying on them while they sleep, and countermeasures against those, and on and on. In short, itŌĆÖs the kind of setting for a space adventure that weŌĆÖve always dreamt of, and yet, it might all be possible.

Cold sleep technology is theoretical, but unlike FTL, itŌĆÖs not considered out of the question that we could develop human hibernation. ItŌĆÖs a bio-engineering problem, and probably admits of more than one solution. ItŌĆÖs an easier problem to solve than FTL, in other words. And by solving it, and using locksteps, we have a universe where travelers can go to sleep at their home port, wake up the next day at a world that could be light-years away, spend some time there and, when they return, find that exactly the same amount of time has passed at home. Locksteps give you the effect of FTL, without requiring FTL.

I wonŌĆÖt go into all the implicationsŌĆöthatŌĆÖs what the novelŌĆÖs for. But, to circle back to the idea of creative constraint, by requiring an FTL-like civilization without FTL, I stumbled into a whole new universe. In the world of Lockstep, there are Sleeping Beauty-like tales, a version of the Twin Paradox, and an even stranger paradox in which the newest immigrants to the lockstep have the longest history with itŌĆ” ItŌĆÖs no exaggeration to say that many books could be written in this world without exhausting its possibilities. Maybe IŌĆÖll write more of them myself.

Meanwhile, the ideaŌĆÖs out there. ItŌĆÖs a bit crazy, but itŌĆÖs a possible solution to an issue, that avoids having to solve an impossible problem.

A constraint that gives us a way to reach the stars.