Small Payloads to the Stars

Making things smaller seems more and more to be a key to feasibility for long-haul spaceflight. Recently I went through solar sail ideas from the 1950s as the concept made its way into the scientific journals after an interesting debut to the public in Astounding Science Fiction. We also discussed Sundiver missions taking advantage of a huge ‘slingshot’ effect as a sail skims the photosphere. These could yield high speeds if we can solve the materials problem, but the other issue is making the payload light enough to get maximum benefit from the maneuver.

It puzzles me that in an age of rapid miniaturization and increasing interest in the technologies of the very small, we tend to be locked into an older paradigm for starships, that they must be enormous structures to maintain a crew and carry out their scientific mission. Alan Mole’s recent paper reminds us of an alternative flow of work beginning in the 1980s that suggests a far more creative approach. If we’re going to extrapolate, as we must when talking about actual starships, let’s see where nanotech takes us in the next fifty years and start thinking about propulsion in terms of moving what could be a very small payload instead of a behemoth.

I think sails connect beautifully with this kind of thinking. Mole envisions a sail driven by a particle beam, with the beam generator in Earth orbit fed by ground-based power installations, but we continue to look at other sail concepts as well, including laser and microwave beaming to ultralight sails made of beryllium or extremely light metamaterials. Payload-inefficient rockets don’t scale nearly as well to the kind of interstellar missions we are thinking about, but sails leave the propellant behind to enable fast missions delivering extremely small payloads.

This kind of thinking was already becoming apparent as early sail work emerged in the hands of Konstantin Tsiolkovsky, Fridrickh Tsander and others, and I’ll point you back to From Cosmism to the Znamya Experiments for more on that. For now, though, have a look at the marvelous Frank Tinsley illustration below. Here’s a startlingly early version (1959!) of sails in action, painted before Cordwainer Smith’s “The Lady Who Sailed the Soul” and Arthur C. Clarke’s “Sunjammer” ever hit the magazines. When Robert Forward began working on laser-pushed lightsails, he would have had images like this from popular culture to entice him. 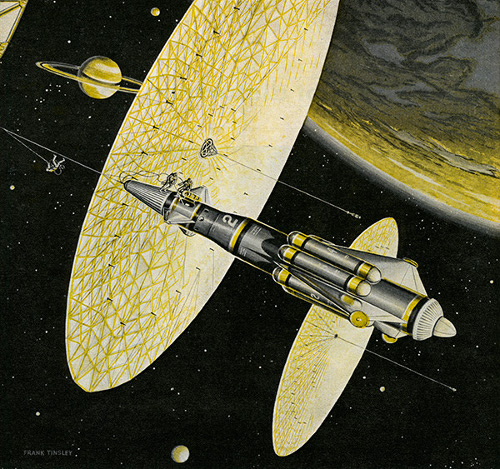 Image: An early look at the solar sail from a 1959 advertising image by Frank Tinsley. Credit & copyright: GraphicaArtis/Corbis.

Tinsley’s career is worth lingering on. A freelance illustrator known for his cover paintings for pulp magazines, he covered a wide range of subjects in magazines like Action Stories, Air Trails, Sky Birds and Western Story, with a stint in the early silent film industry in New York City in the 1920s, where he served as a scenic artist and became friends with William Randolph Hearst. By the 1950’s, he was illustrating articles for Mechanix Illustrated. A representative sample of the latter work can be seen here, packed with speculations about futuristic technologies.

But back to sails carrying small and innovative payloads. In a 1998 paper in the Journal of the British Interplanetary Society, Anders Hansson, who had two years earlier described what he called ‘living spacecraft’ in the same journal, reported on NASA Ames work into spacecraft consisting of only a few million atoms each. The study speculated that craft of this size would travel not as single probes but as a swarm that could, upon arrival at a destination system, link together to form a larger spacecraft for exploration and investigation.

Gregory Matloff, who along with Eugene Mallove wrote the seminal paper “Solar Sail Starships: The Clipper Ships of the Galaxy” for JBIS in 1981, has recently discussed the design advantages of solar sail nano-cables that would be much stronger than diamond. Nanotechnology in one form or another could thus influence the design even of the large sail structures themselves, not to mention the advantages of shrinking the instruments they deliver to the target. We may one day test out these ideas through nanotech deployed to asteroids to harvest resources there, teaching us lessons we’ll later apply to payloads that assemble research stations or even colonies upon arrival.