Digging into the Late Heavy Bombardment

The Barberton greenstone belt is considered one of the oldest pieces of continental crust on the planet. About 100 kilometers long and 60 kilometers wide, the belt is in South Africa east of Johannesburg and not far from the border of Swaziland, a region where gold was first discovered in South Africa. Greenstone belts, however, are numerous, widely distributed geographically and throughout geological history, all of them marked by the characteristic green hue imparted by the metamorphic minerals within their rocks. The Barberton greenstone belt is now yielding evidence of a massive ancient impact well over three billion years old.

The paper on this work is slated to appear in the journal Geochemistry, Geophysics, Geosystems, where scientists will make the case that the impact they are tracking occurred 3.26 billion years ago at the end of the Late Heavy Bombardment, a period between three and four billion years ago when numerous large asteroids are thought to have struck the planet. The impact may have caused a major shift in plate tectonics, and characterizing it will help us better understand the conditions life struggled against in its earliest evolution.

It is possible that changes to the environment caused by impacts like this one may have wiped out existing microscopic organisms, only to allow other organisms to evolve. What’s mind-boggling here is the sheer size of the event. Have a look at the graphic below, and note in particular the comparison of the impact crater to the island of Hawaii. 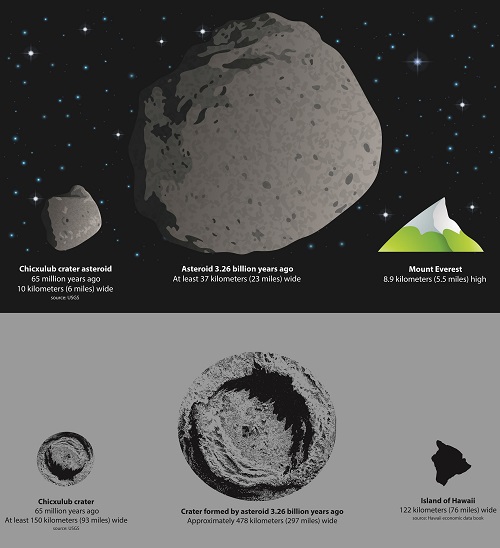 Image: A graphical representation of the size of the asteroid thought to have killed the dinosaurs, and the crater it created, compared to an asteroid thought to have hit the Earth 3.26 billion years ago and the size of the crater it may have generated. A new study reveals the power and scale of the event some 3.26 billion years ago which scientists think created geological features found in a South African region known as the Barberton greenstone belt. Credit: American Geophysical Union.

The asteroid, according to this American Geophysical Union news release, would have been three to five times larger than the Chicxulub impactor considered to have played a huge role in the extinction of the dinosaurs. Striking the Earth at 20 kilometers per second, the object would have created a crater nearly 500 kilometers across, a larger jolt than a 10.8 magnitude earthquake, creating tsunamis thousands of meters deep. The researchers believe the sky would have become red hot and the tops of the oceans would have boiled.

“We are trying to understand the forces that shaped our planet early in its evolution and the environments in which life evolved,” said Donald Lowe, a geologist at Stanford University and a co-author of the study. As to the asteroid itself, Lowe added, ““We knew it was big, but we didn’t know how big.” The team’s model shows that while the Chicxulub event is estimated to have released a billion times more energy than the Hiroshima and Nagasaki bombs, this more ancient impact would have been far more powerful, and it was just one of many in the Late Heavy Bombardment.

The actual site of most of the impacts during the LHB is unknown, the victim of erosion, crustal movement and evolving geology, and the researchers believe the asteroid they are studying impacted thousands of kilometers away from the Barberton greenstone belt, though its seismic waves would have been responsible for the geological formations found in the region. Clearly the early Solar System was a chaotic and dangerous place, one in which the great experiment of life was under continuous threat. To map an impact that occurred more than three billion years ago is to chart the dimensions of ancient catastrophe, a time when vaporized rock fell as rain.